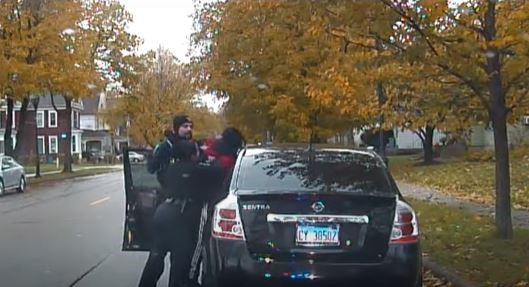 The Aurora Police Department has released the squad video of a traffic stop last Friday afternoon after a portion of the incident appeared on social media over the weekend, causing an uproar over allegations of police brutality. That footage, captured via a cell phone, depicted the end of the confrontation, wherein the police officers are seen physically restraining the driver of the car and its passenger in order to take them into custody.

In a lengthy statement on its social media page, the APD defended the officers’ behavior, providing what it considers to be a more accurate and complete description of the events that day. Here is a portion of that description:

While the officers were on the ground with the driver, the 16-year-old passenger jumped out of the car through the driver’s door and attempted to get his arm around the male officer’s neck. The officer pushed the teenager back and attempted to grab him to take him into custody. The officer pulled his taser from his holster and activated the front laser, a de-escalation feature of the taser device. The taser was pointed at the 16-year-old, but never fired and the 16-year-old immediately began to comply by laying on his stomach. He was taken into custody without further incident.

The driver, a 20-year-old female resident of Aurora, was arrested on the active warrant without further incident.

Here is the entirety of the squad video.

The release points out that the Kane County State’s Attorney’s Office has reviewed the facts and evidence of the incident and has authorized the following additional charges against the driver: Aggravated Battery Against a Police Officer (Class 2 Felony) Resisting or Obstructing a Police Officer (Class 4 Felony) Unlawful Possession of Cannabis by Driver (Misdemeanor).

The 16-year-old teenager was also charged by the KCSAO with the following felony charges: Aggravated Battery Against a Police Officer Resisting or Obstructing a Police Officer.