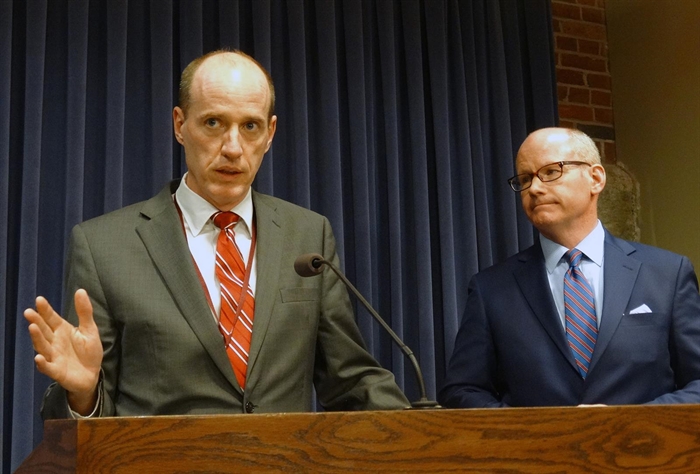 After adjournment, Senate President Don Harmon, D-Oak Park, made a statement similar to one he made June 1 after the Senate failed to call an energy bill for a vote ahead of the regular session adjournment.

“There are still some points of contention between two critical constituencies – between labor and the environmental activists – I believe they’re going to be continuing to meet as early as this evening to try to work out those differences and the Senate stands ready, willing and able to return as soon as an agreement is reached,” he said Tuesday.

Harmon did not say how many Democratic lawmakers peeled support from the proposed energy package, but noted he was “confident that the bill as proposed would not have passed today,” if brought for a floor vote.

Still, he said he is also “confident” an energy bill will pass this summer.

“There are two proposals, more or less. One, which is supported by the governor and the environmental community, is a very much accelerated decarbonization schedule. One that the organized labor in the state has indicated they would support is a less accelerated form of decarbonization,” Cunningham said.

The governor’s office initially favored a timeline that would require coal plants to be forced offline by 2030, but that was pushed back in negotiations until 2035. Much of the negotiation in recent days centered on whether the state would allow the gas and coal-fired plants to install carbon sequestration technology to bury emissions underground in order to meet declining carbon caps.

While the discussion of caps on coal plants stalled the bill on May 31, Harmon said the sticking point is now the decarbonization of gas plants. All sides agree that gas will be taken offline by 2045, he said, but the questions pertain to what the transition period would look like.

With a phased carbon cap proposed by the governor, closure could come far sooner than 2045, Harmon said, preventing gas plants from having the ability to transition to new sequestration technology or potentially hydrogen as an alternative to natural gas.

Representatives of Gov. JB Pritzker and various clean energy groups were in attendance at the committee hearing earlier Tuesday morning, but they were not called to testify. Pritzker’s office distributed Deputy Gov. Christian Mitchell’s prepared testimony after the hearing.

Mitchell cited a letter written from more than 50 lawmakers to the governor which requested two major coal-fired plants downstate – the Prairie State Energy Campus in Marissa and the City, Water, Light, and Power plant in Springfield – be exempted from the 2035 closure in order for them to support the bill.

Read about the impact on certain Fox Valley communities of closing the coal-fired Prairie State Generating Station in downstate Illinois.

“We’ve come a long way. We have moved substantially,” Mitchell wrote in the prepared testimony. “The other side has not moved much. Everything we were told was necessary for an agreement – including a carbon capture exemption that gives both the Governor and environmentalists heartburn – is now present. And at some point a progressive climate bill is no longer a climate bill, and going further than this is the tipping point.”

Mitchell said the governor’s bill would preserve 2,000 nuclear jobs by subsidizing three nuclear plants, create many more jobs in the renewable space and in the electric vehicle industry, and would allow coal plants to maintain their jobs for at least the next 14 years.

“We can’t understand why those who oppose this measure would ignore the jobs I’ve just listed to try to preserve jobs that may go away decades in the future,” Mitchell said, noting the governor “stands ready” to sign the proposal.

Aside from decarbonization, Cunningham said, the bill is largely negotiated.

It contains goals of putting the state on a path to 40 percent renewable energy by 2030 through an increased fee on ratepayer bills; encouraging adoption of electric vehicles through rebates and incentives; and getting the state to 100 percent carbon-free energy by 2050. It also strengthens several ethics measures for public utilities.

It also provides several ratepayer subsidies for the development of renewable energy and preserving the profitability of nuclear energy.

That includes, but is not limited to, $694 million in subsidies to three nuclear plants owned by energy giant Exelon at a cost of about 80 cents on the average monthly ratepayer bill; an added $1.22 to an average bill to fund new renewable development; 86 cents for an expanded low-income weatherization program; about 18 cents per month to incentivize the transition of closed or closing coal plants to solar facilities; and another 9 cents per month for the conversion of coal sites to battery storage.

The House is scheduled to come back to the Capitol Wednesday to deal with the energy package, but it was not clear if that chamber would take the lead on an energy proposal in the absence of Senate action.