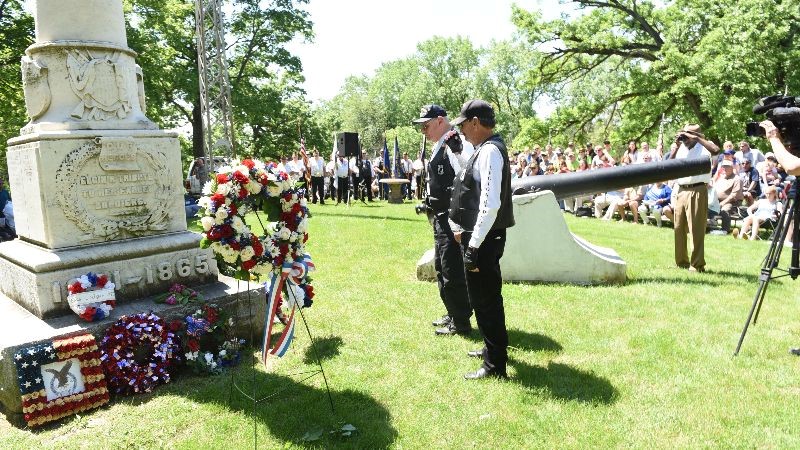 The Elgin Patriotic Memorial Association, in cooperation with the City of Elgin, invites the public to attend the Memorial Day events on Monday, May 30. For information, including possible weather related changes, visit elginmemorialday.org.

​This service will feature a Catholic Mass along with a combined color guard, rifle salute and the playing of Taps.

This service will be held at the cemetery’s Garden of Honor and include a combined color guard to honor those buried at Lakewood Memorial Park. The observance will conclude with a rifle salute and the playing of Taps.

Organized by the Elgin Navy Club and the Elgin Marine Corps League, this program is specifically designed to pay tribute to veterans interred at sea. Following a presentation by Elgin Navy Club members, the service will conclude with the strewing of flowers into the Fox River, rifle salute and the playing of Taps.

The most solemn moment of the morning will be the laying of organizational wreaths at the Grand Army of the Republic Memorial – an observance akin to the laying of wreaths at the Tomb of the Unknowns in Washington D.C. Activities will include a roll call of deceased veterans, a rifle salute and the playing of Taps.

There will be a free shuttle bus service this year that will provide transportation to and from the ceremony area from the main and east gates.

For those who choose not to attend in person, this service will be broadcast live on WRMN 1410 AM radio and WRMN Facebook Live. A video of the program will be available later in the day and posted on the City of Elgin Facebook page and YouTube channel.