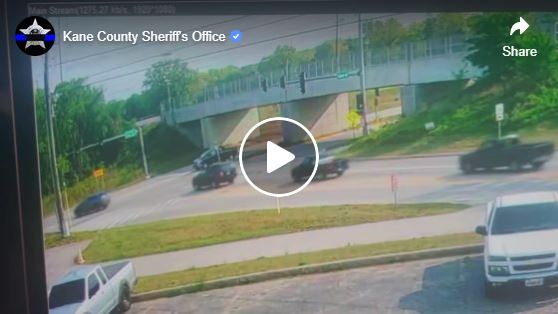 Police have now released a photo of the vehicle believed to be the one that struck a 72 year-old man sitting on a motorcycle at a stoplight and then sped away.

The offending vehicle is a red or maroon color SUV, possibly a Jeep Cherokee with front driver’s side damage. Deputies are asking anyone with information to call Detective Minuth at 630-208-2034.

The driver of the motorcycle, a 72 year old resident of St. Charles, was transported to an Elgin area hospital with potential life threating injuries. The Kane County Accident Reconstruction Team responded to the scene to assist KCSO deputies with the investigation.

NOTE: Since this article was first published, the video of the incident had been restricted and is no longer available to us. Please visit the Kane County Sherriff’s Office Facebook page to view the incident. We apologize for the inconvenience. We are working to regain video access.