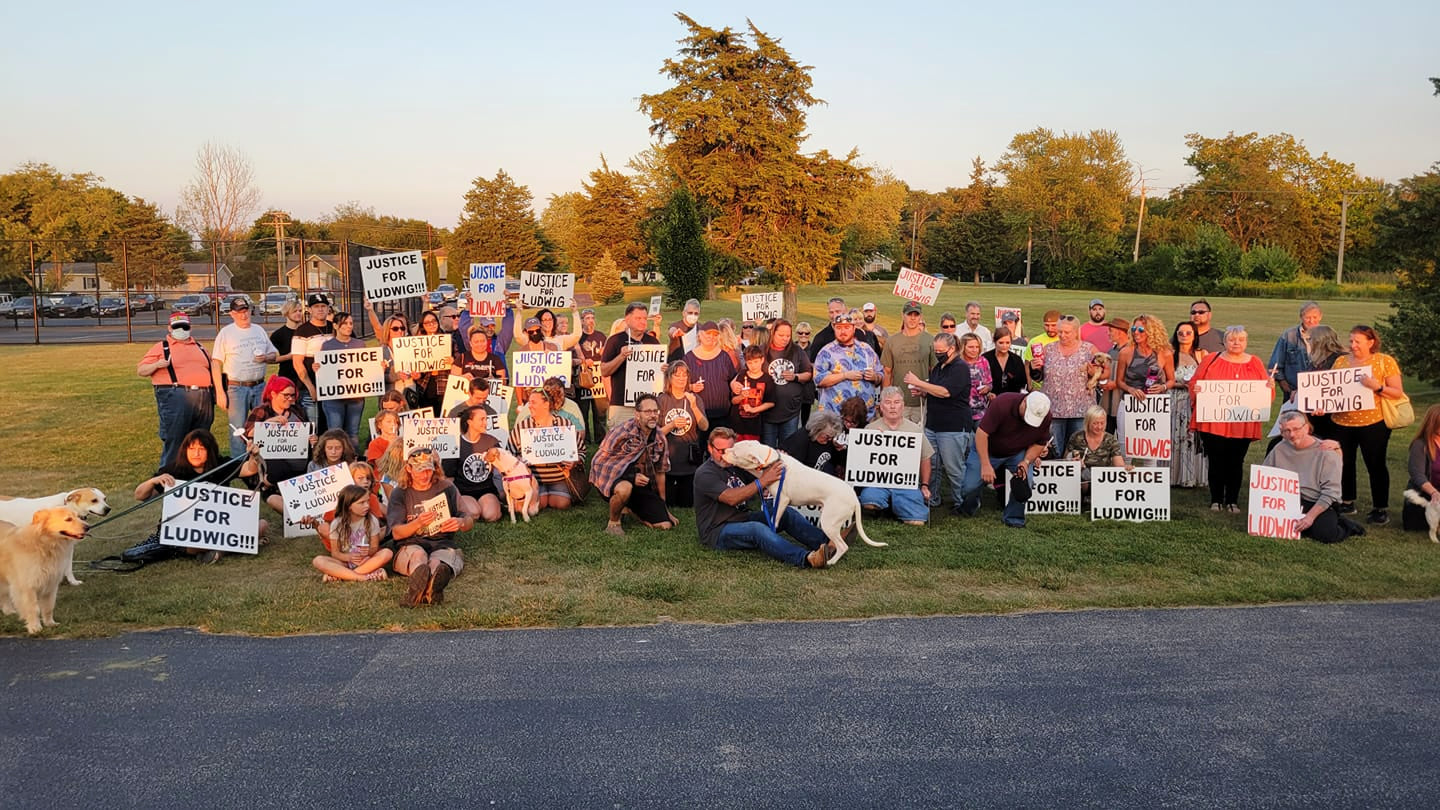 In a roughly 20 minute presentation, Kane County Sherriff Ron Hain laid out the evidence that had been obtained during the weeks-long investigation by his office, including the enhanced surveillance video from Petit’s home that gave a partial picture of what happened during the incident. Mosser then walked through the legal aspects she said formed the foundation of her ultimate decision not to prosecute.

In what is in some ways an ironic twist, it was Petit’s surveillance video, along with a hitherto unknown independent witness, that the ultimate decision not to prosecute turned upon.

“I think it was both the surveillance video as well as the independent witness [that led me to this decision],” Mosser said. “They corroborated Mr. Phipps’ statement that something was occurring with the dogs that put him in fear of his life.”

According to Phipps, he was doing yardwork that day when Ludwig and his sibling Philotimo came onto his property and barked aggressively at him, while at the same time blocking his ability to go back to his house. Phipps believed he was in danger, so he pulled out a 38 caliber snubnose revolver and shot Ludwig once from a distance of 5-10 feet.

Ludwig then limped back to the Petit property, along with Philotimo, stumbled into the river and began to float away until grabbed by family friend and dog-sitter Kathleen Czaplewski, who was supervising the dogs at the time.

The independent witness, who was not identified, testified to investigators that she was walking her dog along the opposite side of the river when she heard loud, aggressive barking coming from the Phipps property. She then heard a single “pop” sound, corroborating Phipps’ statement that he fired only one round. (Investigators later found one spent shell on the property where Phipps stated he shot Ludwig.)

Hain went on to explain that the credibility of certain testimony from Czaplewski was severely damaged by her inconsistency about where Ludwig was when he was shot, where she was in proximity to Ludwig at that moment, and how many shots she heard fired. In addition, Hain indicated that at the time of her first interview by Wayne police officials, she gave the appearance of being intoxicated.

In reaching her decision, Mosser indicated that she had consulted Illinois statutes and prior case law regarding the abuse of companion animals such as Ludwig and had concluded that while Phipps’ actions were in violation thereof in some respects, the fact that he was in reasonable fear of his life justified the shooting, and that, further, the evidence uncovered during the investigation made that fear reasonable.

Interestingly, a recent bombshell in the case that was delivered by a friend and neighbor of Petit, Caitlyn Ballard, ended up working in Phipps’ favor.

Earlier this summer, Phipps was allegedly bitten by Ludwig while in his front yard. Petit was issued a citation for that event. On that same day, June 29, Phipps apparently went to the home of Caitlyn Ballard, a neighbor of both Phipps and Petit, and told her about the incident, according to a sworn affidavit.  In that affidavit, Ballard indicated that Phipps told her that Ludwig and Philotimo had also attacked her dog that day, to which Ballard replied that that was impossible given the fact she had been gone with the dog all day. More importantly, Ballard testified that Phipps told her that he was going to “shoot and kill” both dogs if they ever went on his property.

Petit had hoped that this testimony would show that Phipps had premeditated the shooting out of malice, rather the doing so in the heat of fear. As it turned out, Mosser viewed the threat as evidence of Phipps’ fear of the animals, thus supporting his claim of being in fear of his life.

Petit was informed of Mosser’s decision in a meeting with Mosser and Hain about 30 minutes prior to the press conference. As of this writing, attempts to reach Mr. Petit for a response have been unsuccessful.