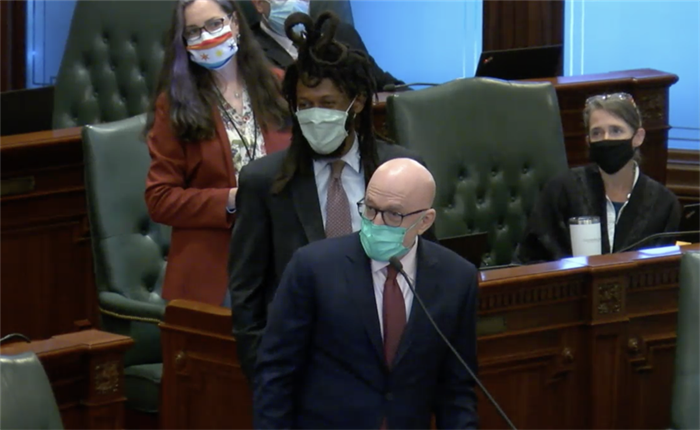 SPRINGFIELD – The Illinois House passed a bill Thursday to prevent “hairstyle discrimination” in schools, sending it back to the Illinois Senate.

Rep. Greg Harris, D-Chicago, who served as the bill’s lead sponsor in the House, said the bill aims to address “historical wrongs.”

Harris cited instances of Black students who were required to change their natural hairstyles as a result of school policies, or who were prevented from participating in school activities outright until they changed their hair.

“I think it’s time to redress those issues, to correct them, and make sure that all our young people when they go to school, anxious to learn…that they’re welcome there, they’re respected there, and they’re all treated equally there,” Harris said on the House floor Thursday.

The bill has been dubbed the “Jett Hawkins Law,” named for the young boy who brought the issue to Simmons’ attention with his mother earlier this session. Hawkins was sent home from school after his hair was deemed in violation of school dress code.

“These policies skew their perception of self and create a feeling of something about them needing to be fixed,” Nelson said. “That is not a good message to send to young, impressionable children, and it is up to all of us adults to protect children, regardless of their phenotype, from any threat to their mental or emotional well-being.”

Opponents of the bill raised concerns that it would affect private and military schools, which often have uniform dress code and hairstyle requirements in place.

Rep. La Shawn Ford, D-Chicago, pushed back on that criticism Thursday, saying children should be made to feel comfortable regardless of their school.

Ford said the bill is about “treating people right, respecting people, allowing people to be who they want to be.”

“(Hair) gives you confidence, it gives you strength, it gives you power, and to force someone that believes in what gives them power to cut it off is bad,” he said.

Rep. Cyril Nichols, D-Chicago, said hair is important to freedom of expression, and should have no impact on a student’s performance in school activities.

“A person wearing their hair is not going to affect anybody learning what two plus two is,” Nichols said. “This allows people to be free, allows people to live their life in a way they want to, private or not.”

The bill passed 89-22. It already passed the Senate, but will be sent back for concurrence on a minor amendment before being sent to the governor.

News On This Day In History | April 15

A truly momentous day in history.