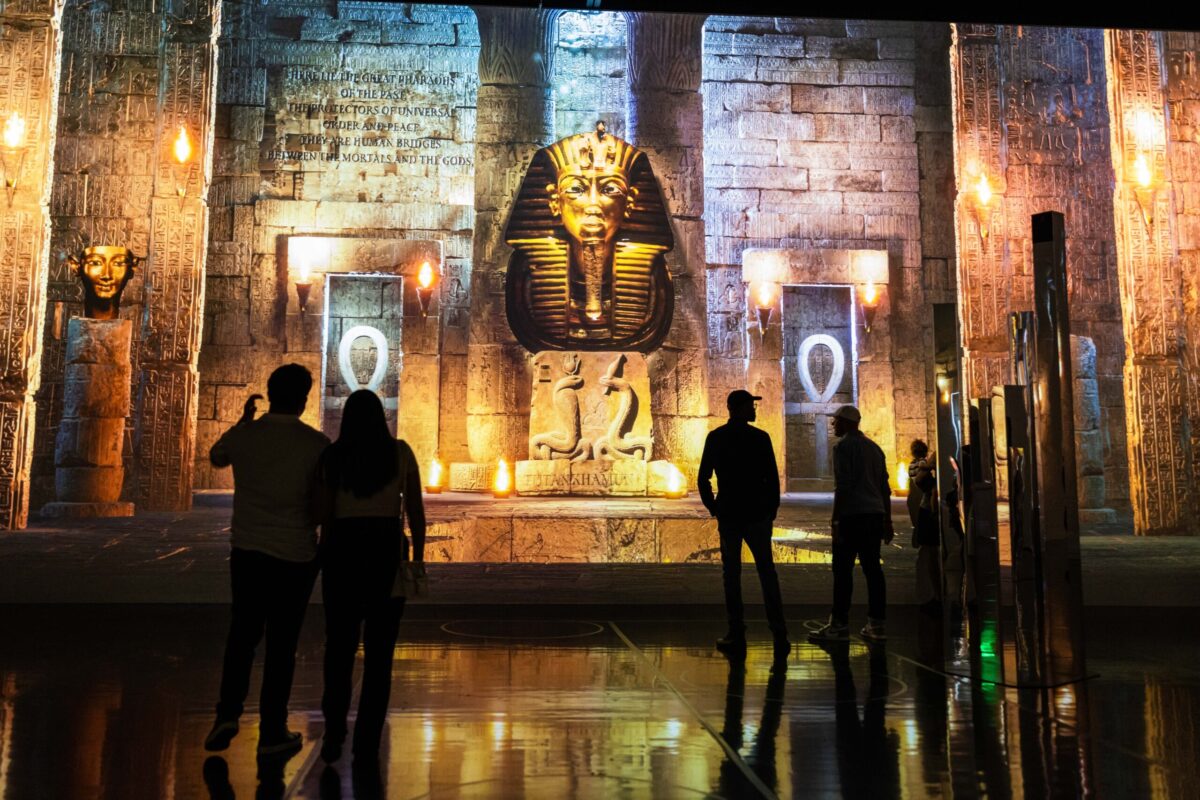 Having pioneered the concept of immersive art exhibitions in North America – including Immersive Van Gogh, Immersive Frida Kahlo and Immersive Monet & The Impressionists – Toronto-based Lighthouse Immersive, in partnership with UEG, IFFDA and with the assistance of the Egyptian Council for Tourism Affairs, is now turning its sights on the most famous of Egyptian rulers, the Pharaoh Tutankhamun in Immersive King Tut. The exhibit will premiere in Chicago on Oct. 14 and is being launched to commemorate the 100th anniversary of archeologist Howard Carter’s discovery of the tomb of the legendary “boy king” in November 1922.

Immersive King Tut uses stunning visuals to tell the story of the Amduat, an important ancient Egyptian funerary text, thought to be the oldest known illustrated story, that was depicted on the tombs of pharaohs. Immersive King Tut also features striking imagery spotlighting some of the most notable discoveries in Egyptology, including Tutankhamun’s golden death mask as well as his ornately decorated middle coffin and painted burial chamber, a depiction of Apophis, the snake god of chaos, from the tomb of Rameses I, and an ancient sculpture from the Cairo Museum depicting Osiris, the ruler of the Underworld, rising with the sun.

Immersive King Tut will premiere in six cities including Chicago, with more to be announced soon:

Tickets, which start at $29.99, are available at immersive-kingtut.com Ticket buyers can save 20% on VIP and premium tickets during the pre-sale, and initial on-sale period, subject to availability.

“Since the discovery of his tomb a century ago, Tutankhamun – or King Tut – has transfixed the world,” said Corey Ross, producer of Immersive King Tut.  “Over the past one hundred years, the magnificent artifacts from his tomb have drawn millions of visitors eager to see first-hand the grandeur and splendor of Egypt’s most famous leader. This captivating experience will use sight and sound to transport visitors more than 3,000 years into the past in a groundbreaking way that only Lighthouse Immersive can.”

The new exhibit is presented under the auspices of the Egyptian Council for Tourism Affairs. “Immersive King Tut highlights one of the most important elements of ancient Egyptian civilization, which is the journey of the deceased during the 12 hours of the night undertaken by the most famous kings of ancient Egypt, Tutankhamun” said Doctor Hazem Attiatalla, Egyptian Council for Tourism Affairs.

“For the first time we’re moving beyond the men and women who have created some of the world’s most prized treasures into a world where the world’s most prized treasures were created to honor one man,” said Svetlana Dvoretsky, producer of Immersive King Tut.  “Visitors to our Lighthouse ArtSpace venues will virtually move from room to room, experiencing ancient Egypt in a mesmerizing way that’s befit for a king.”

Lighthouse Immersive is partnering with United Exhibits Group (UEG) and International Foundation for Fine and Decorative Arts (IFFDA) to bring this exhibition to its venues across North America.

“The foundational story and concept for Immersive King Tut came from the very significant and popular ancient Egypt exhibition, Quest for Immortality, that premiered at the National Gallery of Art in Washington D.C. and then toured internationally for 15 years,” said UEG founder Teit Ritzau. “The Quest for Immortality exhibition told the ancient Egyptian story of the Amduat as it was preserved in the tombs of the pharaohs of New Kingdom Egypt based on the exhibition’s concept, developed by the world leading Egyptological expert Dr. Erik Hornung.”

“For the Immersive show, the team preparing Immersive King Tut have adapted and built on the concept of Quest for Immortality,” added Dr. Carolyn Routledge, Director, UEG ADM. “In doing so they are creating the first dramatic telling of one of the most important elements of ancient Egyptian culture and specifically for the young Tutankhamun: his voyage from the tomb to the underworld to join the exciting and perilous journey of the sun god in his boat through the 12 hours of the night to ensure the successful rising of the sun to this world in the morning and at the same time the rebirth of Tutankhamun in the afterlife.”

Immersive King Tut was designed by the acclaimed creative team at Cocolab in Mexico City.  The project is headed by César Moheno-Pla, with original music by Edi Kistler and art direction by Renata Galindo.

“Audiences will experience a much more cinematic experience than other immersive shows,” said Moheno-Pla. “We’ve developed ground-breaking animation techniques that will give the feeling of a true immersive experience; visitors will feel like they’re walking the halls and exploring the tombs of ancient Egypt.

“Immersive King Tut also features a strong narrative that goes beyond simply showcasing the grandeur of ancient Egypt. The story will help guests journey with King Tutankhamun as he faces nightly battles in the afterlife to emerge triumphant when morning comes,” Moheno added.

Tutankhamun was an Egyptian pharaoh who ruled around 1332 – 1323 B.C. Taking the throne at about nine years of age, his short reign spurred the creation of some of the most important artworks in all of world history, and for many these mark the height of ancient Egypt’s culture.  The discovery of the treasures in his tomb in 1922 by acclaimed archeologist Howard Carter changed the world dramatically in its view of ancient Egypt, archaeological discovery, and sparked a global fascination with ancient Egypt that continues to this day.  More than 5,000 artifacts were ultimately removed from the king’s tomb and are preserved in Egypt’s national collection.

“Immersive King Tut will amaze the lovers of ancient Egyptian civilization,” added Dr. Attiatalla. “On behalf of the Egyptian tourism industry, we have given our full support to this show to not only highlight the magnificence of ancient Egypt, but to attract more tourist traffic to Egypt.”