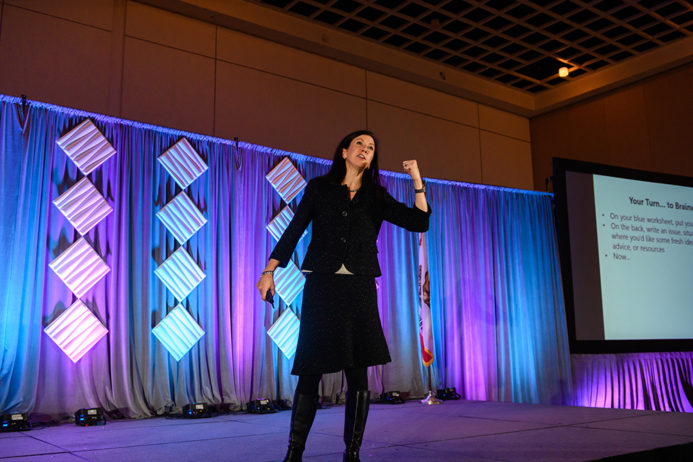 Having graduated from law school and after passing the bar exam in Illinois, Tardy decided she wanted to live in San Francisco “because of the weather…and yeah, because I wanted to be in Silicon Valley.”

She interviewed her way to a position at professional services giant Coopers & Lybrand (since merged with PriceWaterhouse to become PwC), worked for a time doing tax research and eventually made the jump to venture capital-focused law firm Pillsbury Madison & Sutra.

“So you could walk into my office on Monday with a brilliant idea and I would have you incorporated and funded with the VC by the end of the week,” she explains wistfully.

She had gotten “the bug.”

She eventually left the law and started her own company, which continues today as “MentorLead,” which develops and delivers mentoring solutions to bridge the gap between people’s potential and their impact on an organization.

MentorLead has serviced clients such as Kaiser Permanente, Stanford, and Cedars Sinai, and Tardy has been honored as an Outstanding Business Woman of the Year by ABWA and with the Vanguard Award from The McGraw-Hill Companies.

The “Just A Coupla Guys” podcast caught up with Tardy recently to discuss her remarkable journey that, at least for now, has ended her up back in St. Charles. Here are a few excerpts from that discussion.

On leaving the law to start her own business:

You know, when you’re in Silicon Valley, the bug of startups just bites you. And so I thought, I wanna do something. And in addition to that, while I was running the legal department of one of the companies, I started volunteering at a girls middle school. And they had an entrepreneurial program teaching seventh grade girls how to start and run businesses. Well, that’s what I did for people. So I thought I could be a coach for a team of girls. I did that for one year. And then the program leader said, “hey, could you run the program for us?”  I’ve never spoken in front of anybody. I’ve never run a program. I knew nothing about seventh grade girls. And I thought, well, that might be fun, because I love this program.

Now this was just a volunteer one hour a week. I still had my job. So I ran the program for five years with a friend of mine. I loved just teaching people, running programs. There was a mentoring component to it. I thought it was fantastic to and wrapped people in this idea of starting businesses.

And then, when the company I was with was starting to go under, I was laying everybody off and I thought “I’m gonna lay myself off and try something new.” That was the moment I quit my job with nothing else happening.

I thought, oh, I’ll start something. And maybe I’ll teach more people how to start businesses. Maybe I’ll run some other programs. And the day that I quit my job, the next day, someone called me and said, “you know Paula called me and said you’re an attorney and said that you could help me start my business.” So I was an attorney for a number of years while I was starting my business. I kind of did them both.

I knew I liked the idea of running a program. I liked speaking. I liked teaching people things. I also wanted to speak. So I created some workshops. I thought maybe I’d coach some people. I created a conference, a women’s conference. I tried to do a bunch of things and put this together. In addition, I was practicing law at the same time, because I did have a mortgage. And so all this was kind of happening as I was figuring out what my company was going to be.

On her big break:

I did not start this business saying “I want to do a mentoring business.” I literally started whatever I could put together because I thought it would be fun to be my own boss. And so I was at a PG&E conference and I was sort of throwing spaghetti against the wall saying, oh, I’m going to do whatever. This woman said, oh, could you come in and pitch to us, we’re going to put together a mentoring program. And I remember looking at that wall of spaghetti going, is the word mentoring on there? Okay, sure. I will pitch this. And she said, we have a bunch of other vendors coming to pitch a mentoring program. Will you pitch yours?

So I had to think about what the heck mentoring was and what I would pitch.

At the time, my mom was getting on match.com. I’m thinking “I’m in Silicon Valley. We’re trying to pitch a mentoring program. Everyone else is gonna show up with a three ring binder.”

Now PG E has offices all over the state. How are they going to run a mentoring program out of a three ring binder? So I show up and I said, you know, we need to do mentoring like match.com so that people can go on and find their own mentors if they don’t have them and they can do a search just like you would for a date, you would find one for a mentor in the organization. And I said, no one else has pitched that, so that’s what we need to do.

They asked me if I’d ever done that before and I said, well, absolutely I’ve done this before! They called me a couple months later and said they’d decided to go with me. And I stopped and thought, who do I know who could help me program this? I found a programmer and we built this platform and that, my friend, is how I got into the mentoring business.

On what her clients are looking for:

I don’t think anyone wakes up in the morning and says “we have a problem with mentoring.” I think they wake up and say, “we have a problem with people leaving, people not moving up into leadership, people not connecting with each other because they’re working at home or they are too isolated – the connection’s not there. We need to figure out how to support their growth and development through this organization.

My solution is mentoring. There’re other solutions out there, but I think mentoring is one of the tools that can help do that.

On her motivation to ride a bicycle across the country:

When I lived in Chicago and went to law school, I did not have a car. So I rode my bike everywhere and fell in love, I loved cycling so much. And when I went out to California, the mountain biking, the road biking, it’s amazing. And so it was one of those things.

If you talk to cyclists, everyone says, ah, “someday I’m going to ride my bike across the country.” And I thought, yes, I want to do that too, but I don’t want to do it when my knees don’t work. So I thought I’ve got to figure out a way to do the bike trip now. So I started my business around 2005 and I eventually moved from San Francisco to New Jersey. And when I was out there, I thought I I’ve got to do this bike ride. So, in 2011, I planned a bike ride from San Francisco to New Jersey and rode by myself, but I had a driver. So let me just be very clear – I did not want to carry my stuff.

I wanted to do this bike ride personally. I thought I’m going ride across the country, but I was also running this business, starting to write, starting to speak. And I thought, how could I add some meaning to this bike ride? I’ve always been fascinated with why people don’t love their jobs more. And I thought, if I went out there I could talk to people. I will be in these small communities. I won’t be on the freeways. Let me see if I can talk to people and find out who loves their job. What do they love about their job? So that became the theme of my bike ride.

I got this RV. I hired this kid who was right out of film school, to drive the RV and hold up his camera. And we put a sticker across the whole RV that said, ”America, tell us why you love your job.” And that’s how the whole thing started. And I went from city to city and we would just interview people and find out.

On her favorite place along the way:

We rolled into Wayne, Ohio, and at the corner of Central and Main Street, there’s this big brick building. On the side of it they’ve painted “Welcome to Wayne, Ohio, home of 842 nice people and one sorehead – Ken Brooks!”

I love that they called the person out! I was so shocked. I had to stop a woman on the street. I asked if  Ken Brooks knows that he’s the sorehead? I felt so bad for Ken Brooks. And she said, “Oh, he knows. And he’s quite proud. And you could go into the post office right now and vote for next year’s sorehead.”

On the roadkill she observed along the way:

Oh, roadkill. Yes. So I’m all by myself. I don’t listen to music or anything else when I’m riding, I really pay attention to the road. So to keep myself entertained, I would just notice the roadkill. And then I started counting on day one. And the count at the end was 2,038 roadkill. It changed as I went from deer to the Armadillo and, and just kept going.

On returning to St. Charles:

Well, come on, St. Charles is awesome.  I love St. Charles!  My mom is still back here and my sister and brother-in-law and my niece and nephews. So I wanted to come home to spend some time with all of them. And we bought a house where right down at the end of the block is my sixth grade locker at Hayes Junior High. So it’s very fun.