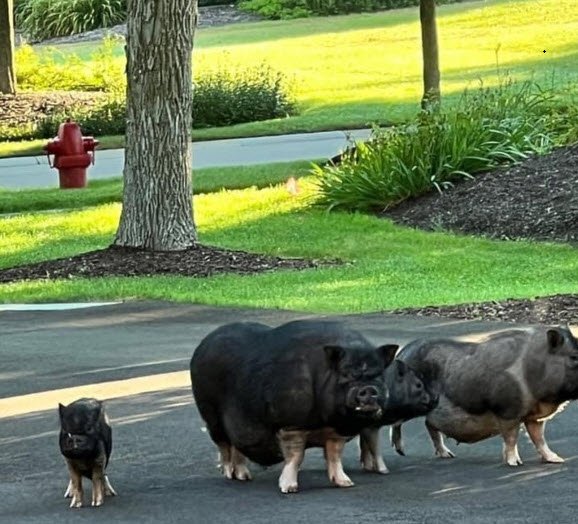 Update: According to the Wayne Police Department, one of four fugitive pigs roaming the Wayne and St. Charles countryside has been captured.

“One down and three more to go… A big thank you to the team of residents who successfully, safely captured one of the pigs yesterday that has been on the loose in Wayne. More work is to be done to secure the rest of the family, so they may be reunited. Great job!”

Speaking to the Kane County Chronicle, Kelly Owens, founder/president of Wayne-based Hands & Hooves Riding, Rescue & Rehabilitation, who is helping in the efforts to capture the pigs, described the capture.

“A teenage kid in the area who actually went out looking for them in the woods got close enough to them to actually grab the mom,” she told the Chronicle. “And we believe he was able to do that because she had a hurt leg. She was not moving very fast.”

Anyone with any knowledge as to the whereabouts of the rest of the gang is asked to call the Wayne Police Department at (630) 232-8400.

Like the last piece of bacon at a table of offensive linemen, an intrepid band of porcine free spirits in Wayne is proving difficult to nab.

Officers of the Wayne Police Department have been hoofing around the underbrush for the past two weeks in search of what appears to be a family of four pigs. According to a post on its social media, the Department believes that the freedom-loving swine have been on the lamb (so to speak) since approximately July 25.

On August 2, coppers thought they had the porky desperados dead to rights on the western side of the village, only to be thwarted by a clever dash (?) into some nearby woods.

(Apparently reticent to show the public how the proverbial sausage is made, and to avoid being mercilessly ribbed by their colleagues, police wisely avoided videoing the debacle.)

The apparent stomping grounds for these plucky porkers is in the area of Army Trail Road, near Robin Lane, although a report today in the Kane County Chronicle suggested that the gang may have been herded to St. Charles.

Which got us to wondering. Is it possible they are attempting to hook up with this fellow?

If anyone know who may be missing a few pigs from their pen, please contact the Wayne Police Department.