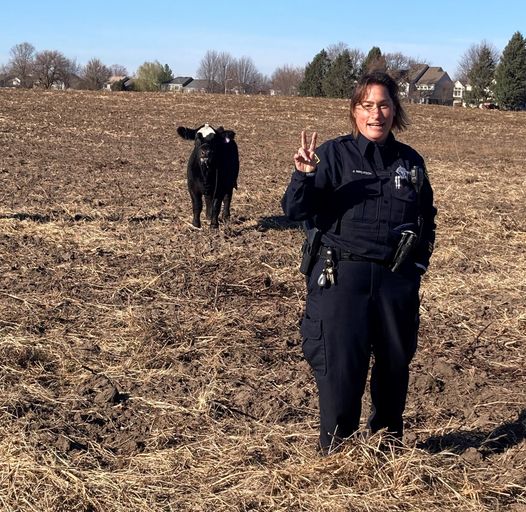 On Tuesday afternoon, travelers down Randall in Elgin beheld an unusual site: a cow casually taking a stroll down the busy street.

In truth, she was so close to traffic it’s lucky she wasn’t grazed.

Rosie (not her real name), the bovine wanderer, had escaped from her owners and apparently sought greener pastures by ambling down the major thoroughfare nearby.

“The call was dispatched to assist Elgin PD with a cow literally running down Randall Road, “said South Elgin Community Service Officer Rosie Vazquez as she fleshed out the story, putting “meat on the bones,” as it were.

“The cow ended up in the field across the street from North Lancaster and McLean. [Elgin] Officer Miklitsch, Officer Devleeschouwer and I assisted with wrangling the cow…like true Yellowstone cowboys!”

With the help of the Elgin PD, the owner, and a few volunteers (and Rosie, presumably), Rosie was safely loaded into a trailer and taken back to her home (west of Randall near Hopps), leaving her rescuers with a lot to chew on.

Rosie’s owners appeared to take her excursion with a grain of salt, and it appeared they had no plans to roast the wayward beast in punishment. Saying it was the first day they had her, they explained “she was probably just exploring her surroundings.”

So Rosie’s big adventure ended harmlessly, which is good because…there was a lot at steak.