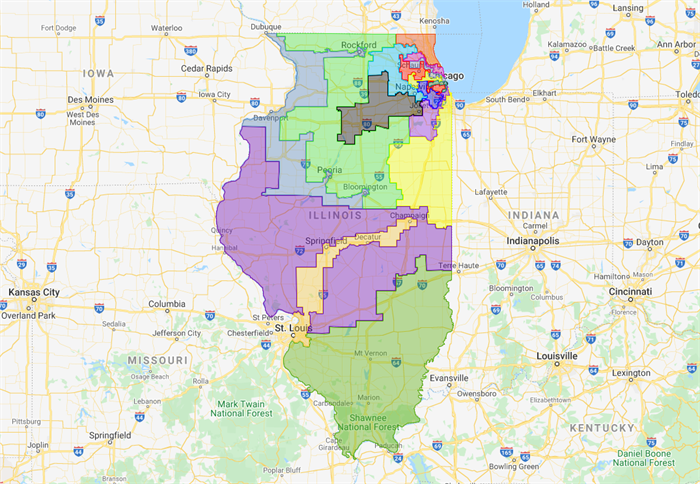 Districts appear to favor Democrats in 2022 by 14-3 margin

Democratic leaders in the General Assembly released a second draft of proposed congressional district maps over the weekend as they prepare to head into the final three days of their fall veto session.

Like the first set of maps that were released Oct. 15, the latest draft would create a number of oddly-shaped districts that are meant to favor Democratic candidates going into the 2022 midterm elections.

They would also create a second “coalition” district in the Chicago area, defined in the Illinois Voting Rights Act as “a district where more than one group of racial minorities or language minorities may form a coalition to elect the candidate of the coalition’s choice.”

“These new proposed congressional boundaries are historic and reflect the great diversity present throughout the state,” said Rep. Lisa Hernandez, D-Cicero, who chairs the House Redistricting Committee. “The proposal ensures minorities, as well as the rest of Illinoisans, have an equitable voice in representation in Washington.”

The Illinois congressional delegation is currently divided between 13 Democrats and five Republicans, but the state is losing one of its districts next year due to its loss of population since the 2010 census.

An analysis by the political website FiveThirtyEight estimates the maps would create 13 Democratic-leaning districts, three Republican-leaning districts and one highly competitive district, the 17th District, currently represented by Democrat Cheri Bustos, of Moline, who has announced she will not seek reelection next year.

The loss of two Republican seats in Illinois could prove important next year when Democrats are expected to lose seats and possibly their slim majority in the U.S. House.

The proposed map would accomplish that, in part, by pitting a number of incumbent Republicans against each other.

Republican Reps. Mike Bost, of Murphysboro, and Mary Miller, of Oakland, would be placed in a single southern Illinois District.

The map would also put Republican Reps. Darin LaHood, of Peoria, and Adam Kinzinger, of Channahon, into a reshaped 16th District that would stretch from the Bloomington-Normal area all the way to the Wisconsin border, circling around the city of Rockford.

Meanwhile, Republican Rodney Davis, of Taylorville, would be placed in a reshaped 15th District that includes his hometown, snakes east around the city of Champaign, then curves back west to take in much of west-central Illinois, from an area just north of St. Louis to an area just south of the Quad Cities.

The plan would also create a new 13th District that would stretch from Belleville and East St. Louis about 170 miles along a narrow stretch that extends to Springfield, Decatur and Champaign. That district currently has no incumbent, but FiveThirtyEight estimates it would lean Democratic by about 7 percentage points.

Republican leaders in the General Assembly did not immediately comment on the latest proposal, which is still subject to amendment before lawmakers vote on a new plan, presumably later this week.