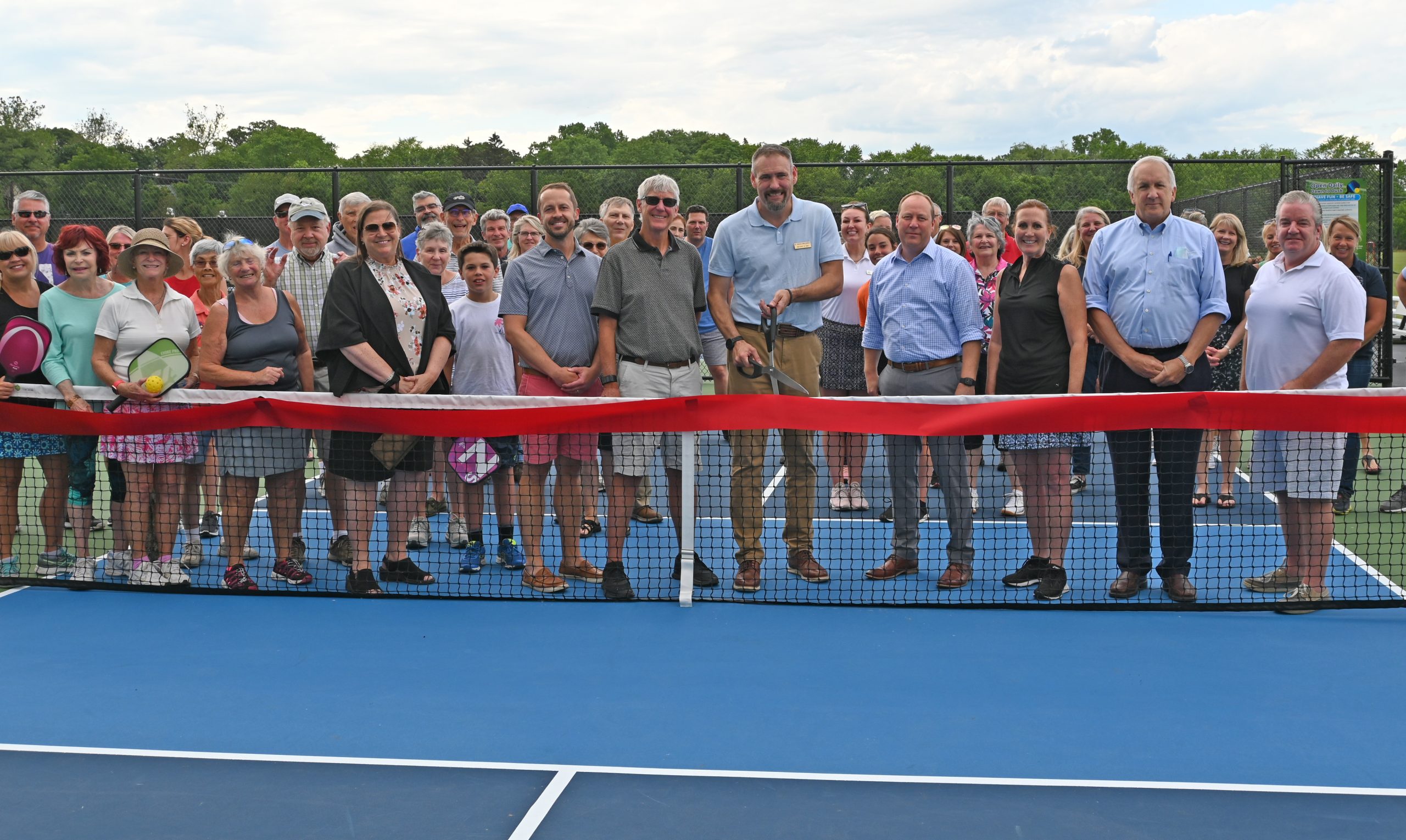 St. Charles Park District recently opened six new outdoor pickleball courts and a basketball court with six hoops on the west side of James O. Breen Community Park. The Park Board of Commissioners hosted a ribbon cutting celebration on June 14, 2021.

“We are really, really excited,” said Cris Anderson, a 72-year-old pickleball enthusiast who provided input for the project.

Anderson picked up pickleball more than a decade ago. She regularly plays in St. Charles and loves to teach others the sport.

She is looking forward to playing at the new outdoor courts and acknowledged the St. Charles Park District and its board for making the project happen.

“I want to thank them for bringing this beautiful, state-of-the-art facility to St. Charles,” she said.

Located near Peck and Campton Hills roads – not far from Hickory Knolls Discovery Center – the six new pickleball courts are fully marked, surrounded by windscreens and individually separated by fencing.

For those who are spectating, a set of bleachers will be on site, conveniently covered by a fabric shade structure.

In addition, a walking path will lead to the courts from an adjacent parking lot, and toilets will be nearby.

The playing area was constructed to serve as a “tournament-quality venue,” said Laura Rudow, Superintendent of Parks and Planning, noting the courts are filling a need in St. Charles.

“We knew we needed more outdoor courts,” she said. “The [number of] residents looking for outdoor pickleball courts was abundant.”

Pickleball is a “fun sport that combines many elements of tennis, badminton and ping-pong,” according to usapickleball.org. The game is played both indoors or outdoors on a badminton-sized court, with a slightly modified tennis net. Players use a paddle and a plastic ball with holes and can play as doubles or singles.

The new pickleball playing area in St. Charles used to be home to underused basketball courts, Rudow said, adding that improvements were also made to the remaining basketball area.

Existing infrastructure at the site helped make the overall project more cost effective, with the contract for both the pickleball addition and basketball court improvements coming in at $222,542, Rudow said.

Athletic Supervisor Megan Hatheway anticipates the new pickleball courts at James O. Breen being busy during the week from about 9:30 a.m. until lunch time and then again when people start to get off work.

The park district has offered pickleball lessons in the past with a program named ‘Pickleball: Funny Name, Serious Game; and plans to again next fall. Instruction is geared for ages 10+ at a reasonable rate.

For more details – or to learn about additional pickleball opportunities in St. Charles – visit www.stcparks.org or call 630-513-6200.