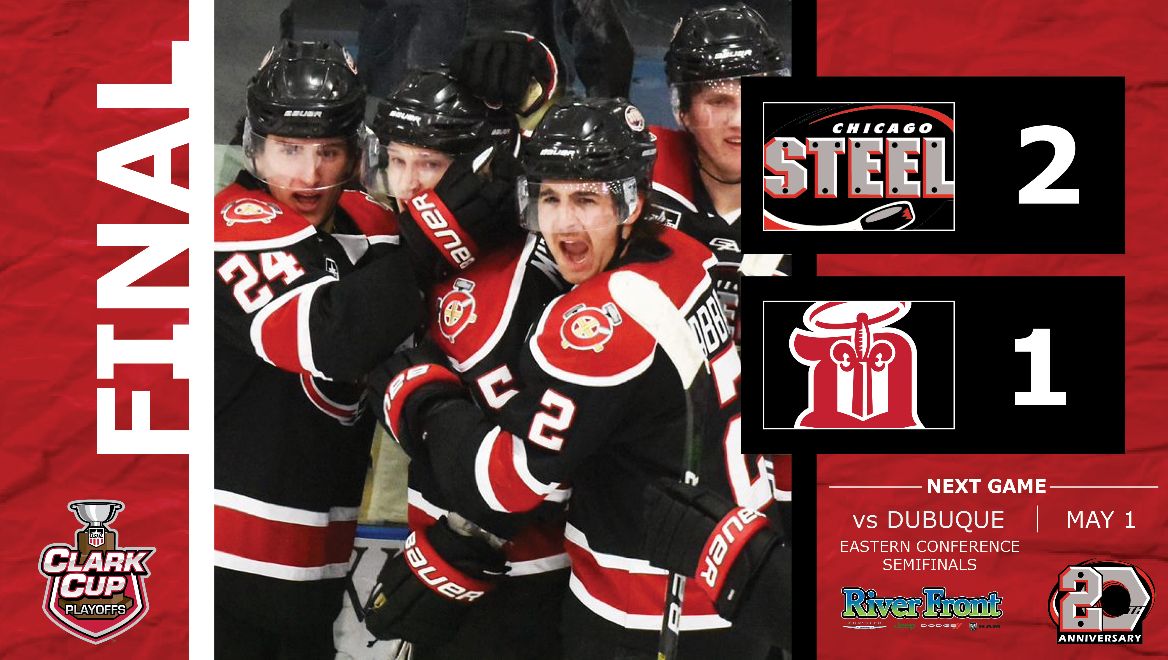 The Chicago Steel fought back from an early one-goal deficit with two goals in the middle frame to take a 2-1 victory over the Dubuque Fighting Saints on Friday night at Fox Valley Ice Arena. The Steel now hold a 1-0 series lead in the Eastern Conference Semifinals, one win away from advancing to the Eastern Conference Final.

Steel forward Matt Coronato factored on both Chicago markers in the second period, picking up a helper on the game-tying goal and potting the eventual game-winner with just seconds remaining in the middle frame.

In his first USHL Clark Cup Playoffs action, Chicago netminder Simon Latkoczy made 29 saves, shutting the Fighting Saints out through the final 58 minutes of the game.

Dubuque grabbed an early lead with a fortunate bounce. Defenseman Braden Doyle tossed a shot at traffic parked in front of Latkoczy from the left point. The puck nicked a group of players and redirected to the right of Latkoczy, popping the back of the net for the only goal of the opening frame.

With three minutes to play in the first period, Latkoczy kept the deficit at one goal with a timely save on Dubuque forward Stephen Halliday. Halliday was the trigger man on a 2-on-1 rush and let go a point-blank wrister that was soaked up by the netminder from Trencin, Slovakia.

After being outshot 10-3 in the first period, Chicago flipped the script and grabbed hold of the game in the second period.

The Steel offense came to life and lit the lamp with goals from Erik Middendorf and Coronato.

Coronato connected with Mackie Samoskevich on a line rush into the Steel offensive zone as Samoskevich pulled up and found Middendorf charging into the slot. After holding the puck, Middendorf fired a wrister from the right side of the slot, beating netminder Lukas Parik on his blocker side.

The final three minutes of the middle frame changed the course of the night, leading to the game-deciding marker.

After a long shift, the Fighting Saints iced the puck with a minute remaining on the clock, forcing the same five skaters to stay on the ice.

Even after a clearing attempt from Dubuque, the Steel were able to limit the Fighting Saints to just a partial change with both Dubuque defensemen staying on the ice.

Sam Lipkin, fresh off the bench, used stick detail to keep a puck in the Steel offensive zone at the blue line. Lipkin took the puck deep and dished a pass to Coronato who fired home his first postseason goal.

The Steel held on in the final frame, thanks to Latkoczy who stopped all 12 shots in the third. The netminder finished with 29 saves, earning his first career playoff victory.

With a 1-0 advantage in the series, the Steel look to secure a sweep in Game 2 on Saturday night at Fox Valley Ice Arena, a 7:05 pm CT puck drop. The game is presented by River Front Chrysler Jeep Dodge Ram.