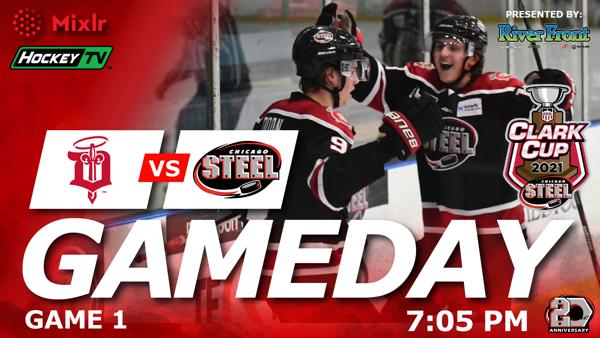 In March 2020, the Chicago Steel Hockey Team was on-pace to break numerous long-standing league records when COVID-19 shut down sports leagues across the country. Just over one year later, the United States Hockey League (USHL) is the only top tier junior league to operate an entire season of play during the lingering pandemic. After another record-setting season which included the club’s second straight Anderson Cup title (awarded to regular season champions), the team continues to draw the attention of the hockey world as they prepare to host playoff action featuring some of the top talent in the world.

“We’ve heard all season long that this has been the best year talent-wise in the history of the USHL,” said Chicago Steel President Dan Lehv. “Because other leagues didn’t play, and we had two fewer teams in the USHL this season, our players faced a higher level of competition and got even more attention from scouts. Our players understand just how valuable their opportunity to play this season truly has been and there’s a strong feeling of unfinished business to complete the journey of last year’s team.”

Last year’s Steel ended with an .847 winning record (the full-season league record is .817) and the team was on pace to break league records in total wins, points and goals scored. This season’s achievements include:

Last year, 8 players with Steel connections were selected in the NHL draft, more than any junior hockey team in the world. This year, the team has ties to upwards of 10 players likely to get the call including active roster players that could be first round picks. Defenseman Owen Power, who starred for the Steel from 2018-2020, currently sits at the top of most mock draft boards as the prospective #1 overall pick.

The Steel are in search of the second Clark Cup Championship in team history, winning its first title in 2016-2017.

“I’m really proud of the players, it’s nice to have played all 54 games,” said Chicago Steel Head Coach Brock Sheahan. “There was a lot of stress during the year but I thought our group came to the rink and got better, especially the last six to eight weeks. I like the way that we’re playing, we’re excited about the group and last year was obviously an abrupt ending but it’s nice to be able to go into playoffs this season. We’re really excited about where we’re at as a team.”

Tickets start at just $10 with venue capacity limited to 25%. The Steel have home ice advantage throughout the playoffs beginning Friday, April 30 and Saturday, May 1 (Sunday, May 2 if needed) in the best-of-three Eastern Conference Semifinals vs. the Dubuque Fighting Saints. Tickets and information are available at ChicagoSteelHockeyTeam.com.