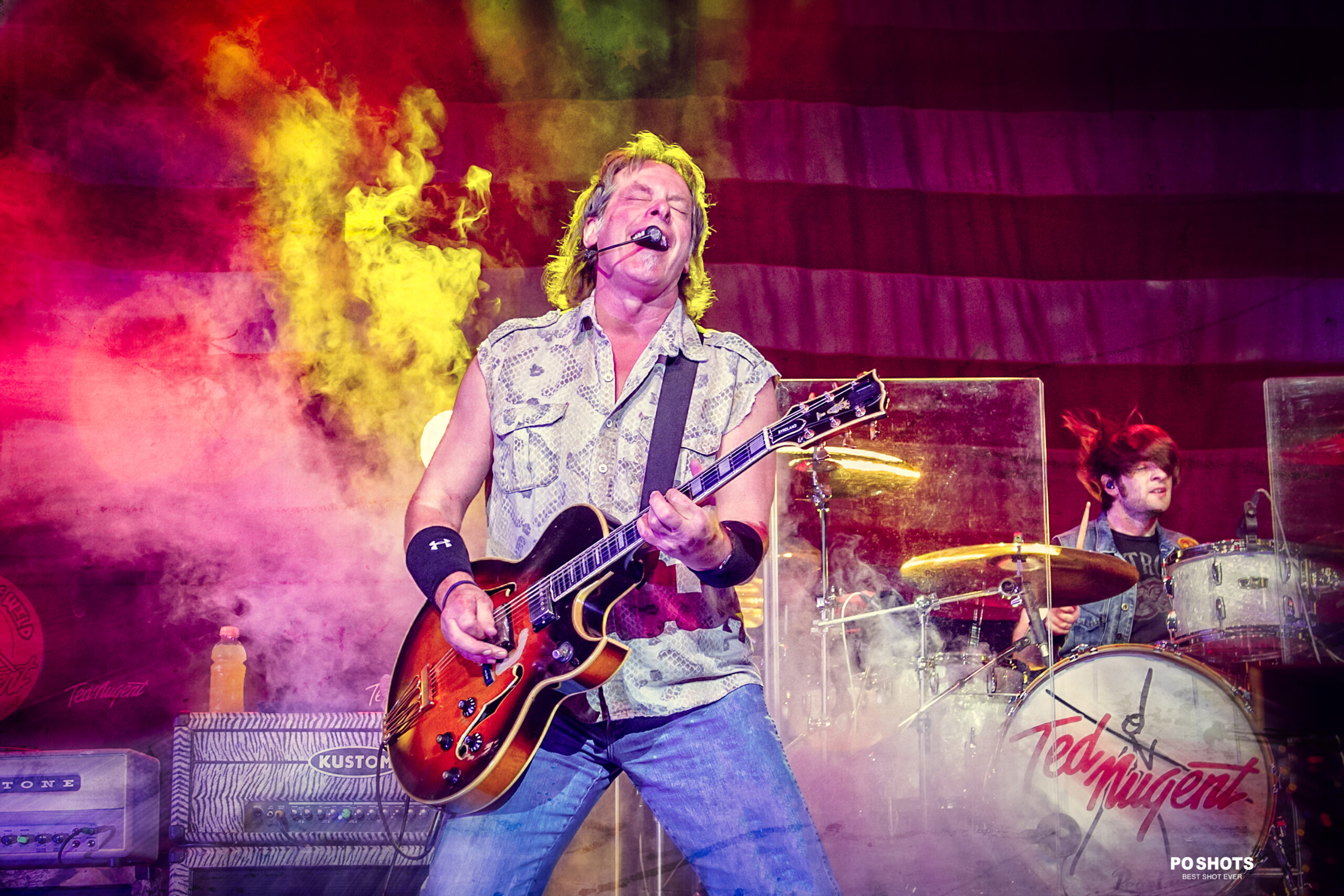 The “Motor City Madman,” Ted Nugent, who is now almost as well known for his gun-toting political views as he is for his hard rock guitar playing, returns to The Arcada Theatre for two nights of All American Rock on July 23rd and July 24th.

The show is all about the music with six decades of multi-platinum hits.  Classics including “Stranglehold” (ranked in the Top 100 Classic Rock Songs and #1 Guitar Lick), “Cat Scratch Fever,” (32nd Best Hard Rock Song of All Time) Damn Yankees chartbuster “High Enough,” and cult classic “Fred Bear,” (the most requested song for radio airplay in Michigan & Wisconsin), must be seen live at least once. Ted Nugent was named Detroit’s Greatest Guitar Player of All Time by readers of MLive, and when he’s not on the road, he’s a New York Times Best Selling Author.

The Outfit, from Chicago have been creating a buzz since coming on to the rock scene. Their first single “Soldier Boy” released in 2018, secured the #34 spot on Billboard’s Mainstream Rock Chart. The three words to describe the band is Original, bold, rock. The new single “Viking” has been received enthusiastically by crowds at the bands recent performances including the Rock USA festival earlier this summer.

Ketchum: You began touring in 1967, what keeps you rockin’ after all these years?

Ted Nugent: Indefatigable spirit and insatiable cravings for exciting musical guitar adventure surrounded by gifted musical forces that share my Herculean work ethic. We simply love the living shit out of this stuff now more than ever.

Ketchum: Why are you calling this tour, The Detroit Muscle Tour?

Ted Nugent: Born in the mighty Motor City in 1948, I was engulfed in authoritative dynamic grinding music that imprinted on my very soul, and this tour and record maximize the accumulation and lifetime celebration of that incredible energy. Propelled by the animal grooves of rhythmgodz Greg Smith and Jason Hartless, my guitar remains fully erect every time I fondle her! I have never had so much fun celebrating Chuck Berry’s vision!

Ketchum: Who are some of your favorite guitarists?

Ted Nugent: There simply would be no killer, soulful, authoritative music without Chuck Berry and Bo Diddly! I have been blessed beyond measure to have jammed with so many of the greatest guitarist of all times including BB King, Chuck Berry, Eddie Van Halen, Brian May, Sammy Hagar, Vic Johnson, Chris Duarte, Rick Derringer, Derek Saint Holmes, Ricky Medlocke, Stevie Ray Vaughan, Mark Farner, Joe Perry, Brad Whitford, Joe Bonamassa, Steve Winwood, and so many others.

Ketchum: Who are some of your favorite people you like to perform with?

Ketchum: How did you become such a Hunting and Fishing enthusiast?

Ted Nugent: I was born and raised in Detroit, but lucky, lucky me, my dad was a bowhunter and he taught me the ways of the wild. Even right there in the Detroit city limits, I had endless wildgrounds along the mighty River Rouge to explore and stalk critters with my trusty little bow and arrow, homemade slingshot and Daisy Red Ryder BB gun.  I am here to tell you that the mighty Spirit of the Wild grabbed me by the soul and hooked me gungho!

Ketchum: Last year you resigned from the board of the National Rifle Association after 26 years and you’re now a national spokesman for Hunter Nation, why the change?

Ted Nugent:  Chronic scheduling conflicts led to my ultimate decision to step down.  I believe I can most effectively lead the charge of the good guys against the bad guys in our vile culture war through my work with Hunter Nation and on the not so mean streets of America every damn day, as always.

Ketchum: Any words for the animal rights groups and activists that protest against you?

Ted Nugent: I kill one deer per arrow, whereas a bowl of salad represents the mega-death of every snake, vole, shrew, ground squirrel, quail, turtle, frog, pheasant, rabbit, ground nesting songbird and every other critter so unfortunate as to get in the way of the plow, the disc, the herbicide and pesticide jihad, all for vegetable production.  Any more questions?

Ketchum: Could you tell us about your weekly Spirit Campfire podcast.

Ted Nugent: My American Dream has been enhanced and throttled by uninhibited, non-filtered honest communication on all levels forever, and my Real America’s Voice Spirit Campfire podcasts and Nightly Nuge broadcasts exemplify this truth, logic and commonsense openness and positive spiritual and intellectual adventure! I do various media nearly everyday year round to drive home the honest, positive pulse of the best Americans.

Ketchum: Lastly, what can fans expect to hear and see at the July 23rd & 24th shows?