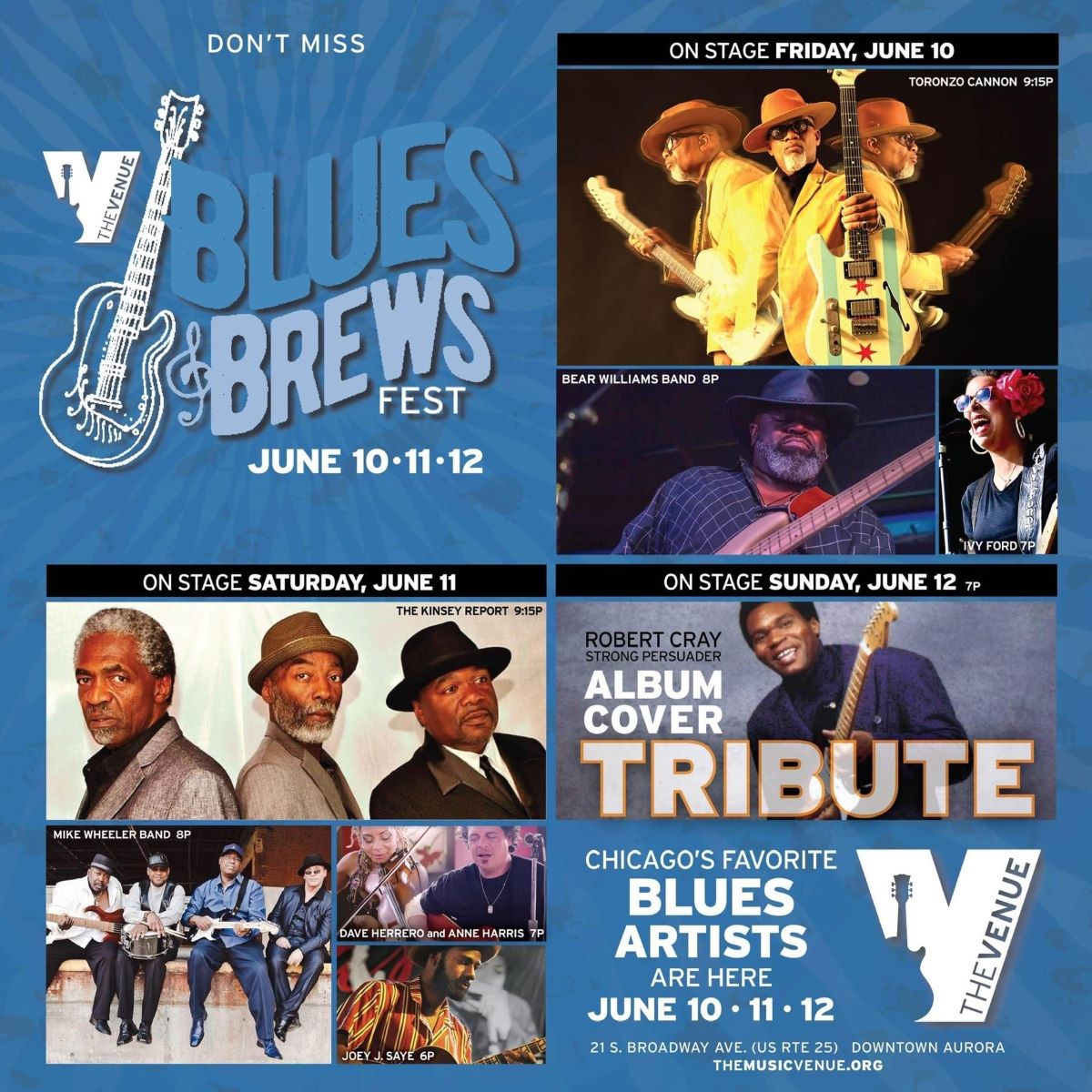 Aurora music hotspot The Venue is hosting a three-day festival of blues in Mundy Park this weekend. General Admission tickets for June 10th, 11th will be $25, June 12th $15. Chairs will be available for a $5 rental fee. Rain or shine.

7:00PM – Ivy Ford will kick off the festival with a bang! Known as ‘Chicago’s Blues Kitten,’ Ivy takes command of every stage and live performance with captivating energy and conviction. She is one of the hottest new bloods on the blues scene and has opened for the likes of Buddy Guy. Tradition and history are safe in the hands of Ivy Ford and presented in a fresh way. She is considered a favorite at The Venue for her fiery performances and undeniable stage presence. Bang!

8:00PM – Bear Williams Band makes its debut at The Venue. Bear Williams cut his teeth by playing on recordings of Gene Chandler and Jerry Butler. For years he was on the west coast working with everybody from Anita Baker, Alanis Morisette, Mavis Staples & The Staples singers and countless others. In 2016, Bear came home to Chicago to focus on being a front man and celebrating his love of blues. Multiple stellar albums and singles have been released since he’s been home. He and his band have been out bringing the music to the people nonstop.

9:15PM – Toronzo Cannon will take the stage in a big way, The Chicago Way. Toronzo has not only made a name for himself as a powerful guitar gunslinger, he’s also known as a powerful songwriter. Mojo Magazine as well as Living Blues Magazine declared his album The Chicago way the #1 blues record of 2016. Since then he has continued to reach people with his music and his message. Toronzo has an additional accolade at The Venue for being the only person who has ever set fire to their guitar on stage during a livestream! Whether the fire is through his performance or started with a match, this set will be a big way to end the day.

6:00PM – Joey J. Saye, Aurora native, begins the festivities. Joey’s Liberian family gave him an early access to all kinds of music. As a kid, he was constantly drawn to the guitar. Soon after forming a rock duo, Joey found the music of Muddy Waters and Memphis Minnie. His course became clear, blues was his music of choice. Since then he has immersed himself within the blues community, played his music across the country and currently holds a Thursday night residency.

7:00PM – Dave Herrero & Anne Harris keep things rolling with an amazing meld of musicality all focused around the blues. The pairing is unique. Anne’s mystical fiddle playing against Dave’s street tough blues guitar work create a sensation and a freshness to the music played. The two feed off of each other lifting moments to great heights. There is a freedom and an excitement in watching. Anything can happen and magically does to the delight of an audience.

8:00PM – The Mike Wheeler Band brings a variety of influence to their music. Mike is known for his soulful vocals reminiscent of Sam Cooke. Throughout the years, he and his band have worked with countless blues and jazz artists. There is an originality to their music. The band has traveled all over the world as ambassadors of Chicago blues. Mike was inducted into The Chicago Blues Hall Of Fame in 2014.

9:15PM The Kinsey Report brings Saturday evening to a close. The Kinsey brothers, Donald, Ken and Ralph grew up playing music backing up their dad, the legendary Big Daddy Kinsey. They formed a sound that mixed old school blues with contemporary sounds and songs. The family band continued after Big Daddy’s passing in 2001 and lights up audiences everywhere they go. Donald’s killer lead vocals backed by Ralph and Ken’s rhythm section proves that blood is thicker than water. Their sound is undeniable, irreplaceable and unable to be duplicated.

7:00PM Album Covers Presents: Robert Cray – Strong Persuader. In keeping with the theme of the festival, Album Covers will perform this classic Robert Cray album. Strong Persuader has sold millions of copies worldwide and has been noted as one of the 50 most important albums of the 80’s according to Rolling Stone. Fans can expect the hits Robert has generated like Smoking Gun or Right Next Door (Because of Me) as well as some deep cuts in the second set. Curator Scott Tipping has assembled a great crew for the evening and promises a fantastic closing to the three day festival.