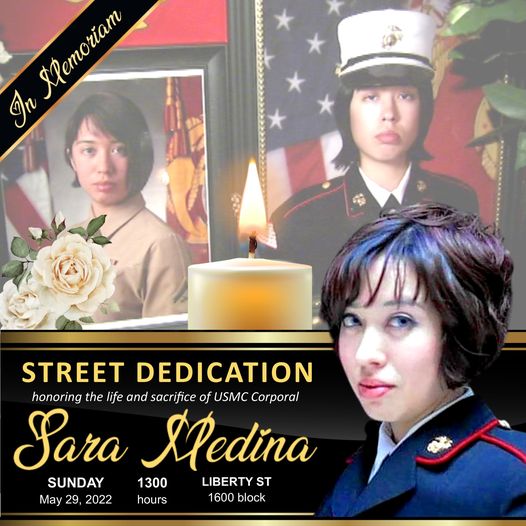 After a devastating earthquake struck Nepal in May 2015, the U.S. military deployed a Joint Humanitarian Assistance Team to the mountainous country to aid the thousands suffering from the disaster. Unfortunately, on the afternoon of May 12, 2015, the helicopter transporting two Nepali soldiers and six U.S. Marines crashed eight miles north of Charikot, Nepal, killing all on board, including Cpl. Medina. She was just 23 years old.

A combat photographer, Medina enlisted in the Marine Corps in 2010, shortly after graduating from East Aurora High School. Before deploying to Nepal, she had photographed Marines in South Korea, the Philippines, Japan, Australia, and the U.S.

This Memorial Day weekend, the City of Aurora will honor the life and sacrifice of Cpl. Medina.

On Sunday, May 29, at 1 p.m., her family and friends will gather near her childhood home for a special Street Dedication Ceremony in the 1600 block of Liberty Street on Aurora’s east side.

“She was the best daughter, the best sister, and the best friend,” said Medina’s mother, Cecilia Lopez Leyva, who looks forward to seeing her daughter’s name on their street, appropriately named Liberty.

During the 2021 Aurora Memorial Day Ceremony, a proclamation was presented to designate November 27, her birthday, as “Sara Medina Day” in Aurora. In addition, at the 2021 Aurora Veterans Day Ceremony, Cpl. Medina was posthumously honored as part of the historic all-female Grand Marshals unit, highlighting the service of female veterans. Her mother participated in her honor.

“She was such a special girl who loved her community and her country,” said Lopez Leyva.