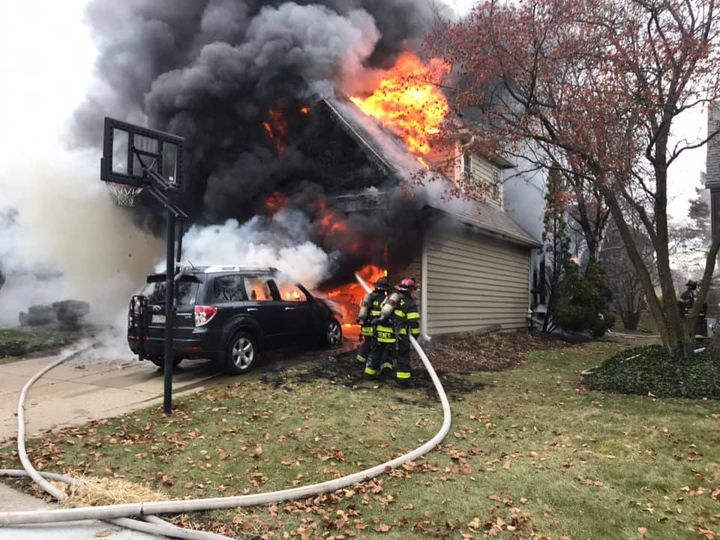 A fire in Aurora Tuesday afternoon destroyed a family dwelling and resulted in the injury of a fireman and the death of the family dog.

At 2:06 p.m. Tuesday, Aurora Central Dispatch dispatched a Box Alarm Structure Fire Response after receiving multiple calls for a house on fire in the 900 block of Clarendon Lane. While en route, the alarm was upgraded to the 2nd Level, bringing 27 firefighters to the scene.

Upon arrival, firefighters found a 2-story single-family home with heavy fire showing from an attached garage that had extended to a vehicle parked in the driveway. The fire also was rapidly spreading to the second floor.

Firefighters from the Engine and Truck Companies began deploying multiple hose lines to extinguish the fire and protect an adjacent home that was starting on fire. A hose line was also deployed to the rear of the fire building to protect another house beginning to catch fire.

One 38-year-old male and a 4-year-old female who were home at the time of the fire escaped. The occupant stated that there were two cats and one dog still inside the house. Firefighters began searching for the pets and located the dog, who was unconscious and not breathing. Firefighters and Paramedics attempted to revive the dog by performing CPR and administering oxygen. Despite their efforts, the dog did not survive. However, firefighters did locate one of the cats who appeared to be shaken up but okay. The other cat was not found.

The fire displaced a total of two adults and two children as the home was deemed uninhabitable. Victim Services and the Red Cross were requested to the scene to assist the family. The cause of the fire is under investigation at this time.