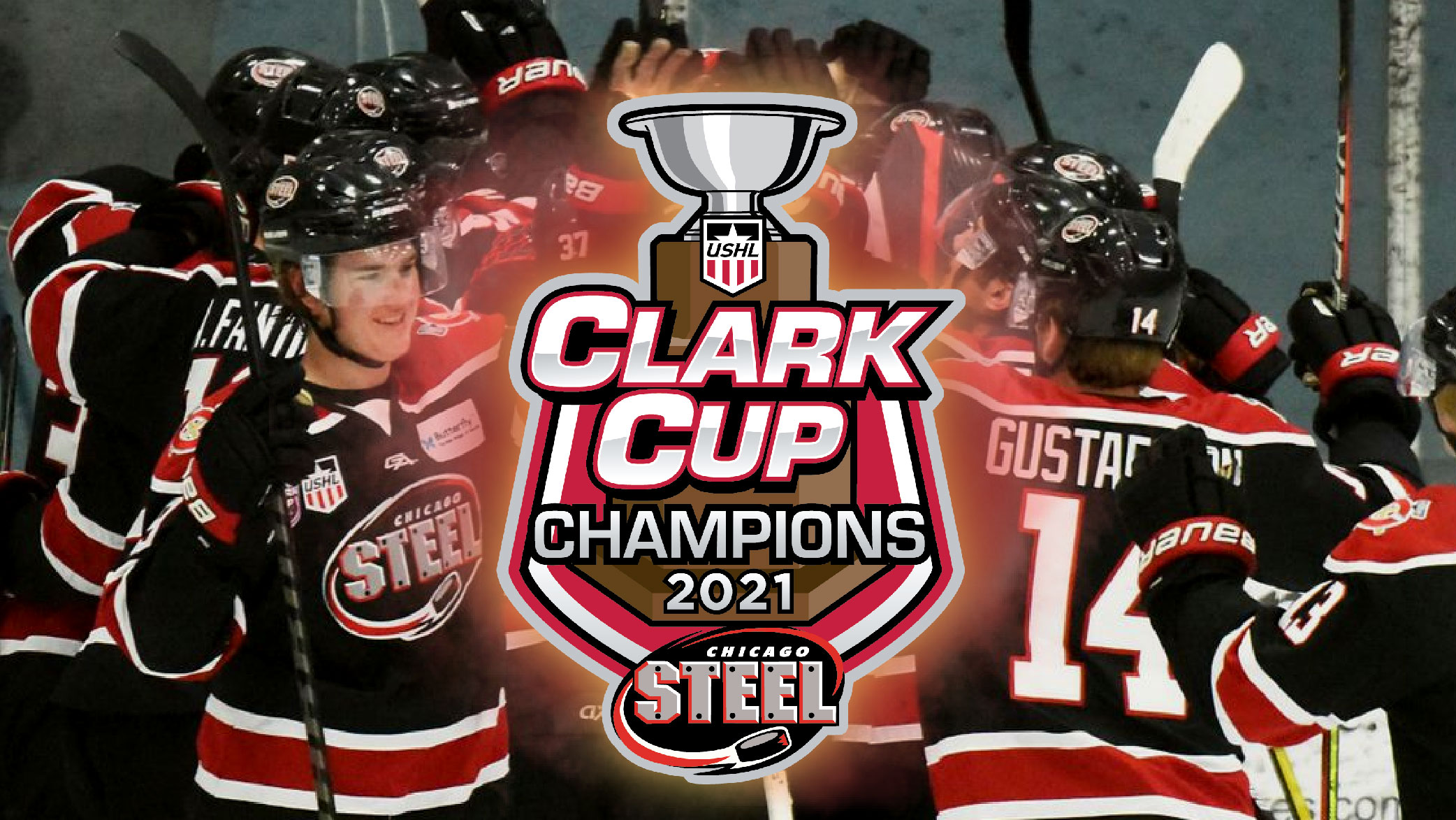 The Chicago Steel beat the Fargo Force 3-1 in Game 4 of the 2021 Clark Cup Final on Saturday night at Scheels Arena in North Dakota to capture the second Clark Cup title in team history as champions of the United States Hockey League.

Chicago becomes the first team since the 2012-2013 Dubuque Fighting Saints to win the Anderson Cup (regular season title) and Clark Cup in the same season. The Steel won their only other Clark Cup Championship in 2017.

With the victory on Saturday night, the Steel won the best-of-five series against the Western Conference Champion Fargo Force three games to one.

Steel forward Adam Fantilli was awarded the Clark Cup Playoffs MVP, finishing the postseason with nine points (8G, 1A) including a two-goal performance in the Clark Cup-winning game.

Fantilli scored twice and Jackson Blake netted a goal while Steel netminder Simon Latkoczy turned away 27 shots from the Force to earn the Clark Cup-clinching victory.

The Steel never trailed in Game 4 as Fantilli reached the back of the net midway through the opening frame.

The Force answered with a marker shortly after, pushing the first period to a 1-1 tie.

Blake tallied his first marker of the postseason in second period, the eventual game-winning goal.

Fantilli put the final nail in the coffin with his eighth goal of the postseason, a goal with just over two minutes remaining.

After missing out on the opportunity to hoist the Clark Cup in 2020, the 2021 title puts an exclamation point on two remarkable seasons for the Steel and represents the completion of “unfinished business” after the 2019-2020 season was cut short due to the COVID-19 pandemic. At the time, the Steel held the league’s best record and were preparing to head into the playoffs as the favorites win it all.

Chicago led the league in scoring for the second consecutive season, tallying a franchise record 265 goals. The club’s 4.91 goals per game shares the second-highest scoring average in USHL history, trailing just the 2019-2020 team which lit the lamp at a 4.94 goals per game clip. The Steel were not held scoreless during the regular season, and only once during the playoffs.

The longest winning streak for the Steel was 12 games and the club never lost more than two games in a row.

Chicago accounted for the top four point-getters during the 2020-2021 regular season, an accomplishment never-before-seen in the USHL.

Sean Farrell paced the league, becoming just the second player in USHL history to break the 100-point mark with 101 points (29G, 72A) over 53 games played. Farrell owns the league record for single-season assists as well as the franchise career and single-season records for points and assists.

Josh Doan finished third in the league in scoring with 70 points (31G, 39A) while team captain Erik Middendorf rounded out the top four with 68 points (32G, 36A).