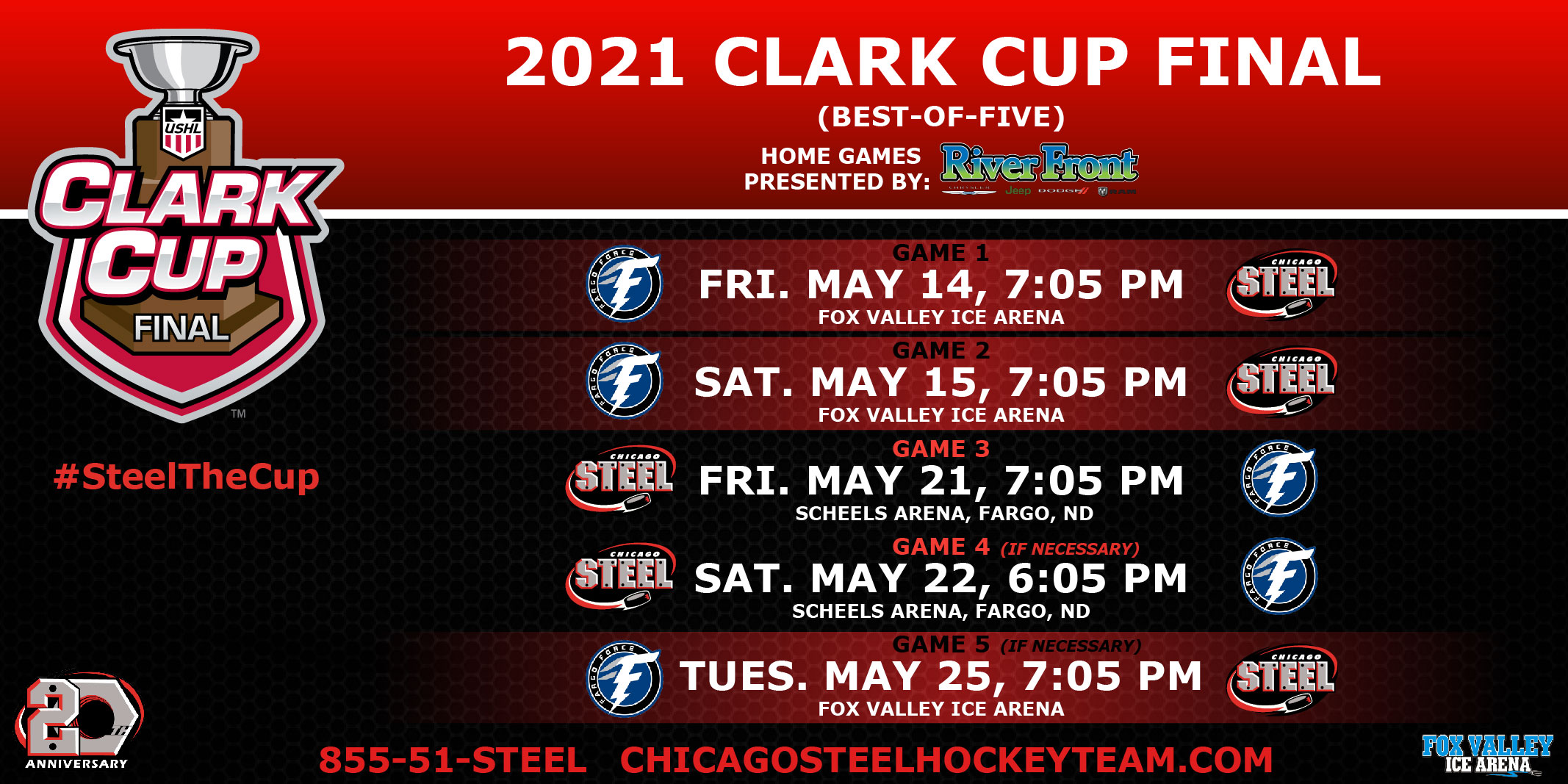 The Chicago Steel were held without a goal for the first time since April 6, 2018 as the Fargo Force took a 3-0 victory in Game 1 of the best-of-five Clark Cup Final at Fox Valley Ice Arena on Friday night.

Despite 23 saves from Chicago netminder Simon Latkoczy, the Steel were held off the scoreboard as the loss snapped a 12-game Steel win streak dating back to the regular season.

The Force took control with a two-goal first period.

Smolen, the only Illinois native on the Fargo roster, tallied the first goal of the Final just over seven minutes into the action. After an initial stop by Latkoczy on a wrister from Ryan Richardson, Smolen crashed the net to tuck home his first of the postseason.

With a 1-0 cushion, Force defenseman Jack Peart intercepted a puck off the paddle of Latkoczy, tucking the puck behind the Slovakian netminder to extend the Force lead to 2-0.

Neither team could reach the back of the net in the middle frame, but Chicago’s penalty kill unit charted a clutch effort in its first shorthanded stretch of the series. After a double-minor for high sticking, the Steel successfully held Fargo off the scoreboard for four minutes.

Fargo’s suffocating defense held the Steel to just five shots on goal in the second period.

Force forward Aaron Huglen extended the lead to 3-0, taking advantage of a delayed call on the Steel. With possession secured and Miller out of the net for an extra attacker, Nick Strom drove the left side and dropped a pass for Huglen who found a tiny seem over Latkoczy’s left shoulder that put the contest out of reach.

Fargo won the shots on goal battle 26-20, the lowest shot total for Chicago in five postseason contests this season as the Force used an aggressive penalty kill to negate four Steel power plays.

The Force lead the best-of-five series, 1-0, as the Steel will look to even the series on home ice in Game 2 at Fox Valley Ice Arena on Saturday night.

Tickets are on sale for Game 2 and Game 5 (if necessary) of the series by visiting ChicagoSteelHockeyTeam.com. Fans may also purchase tickets during regular business hours by calling 855-51-STEEL or by purchasing in-person at the Steel box office starting at 10:00 am CT.