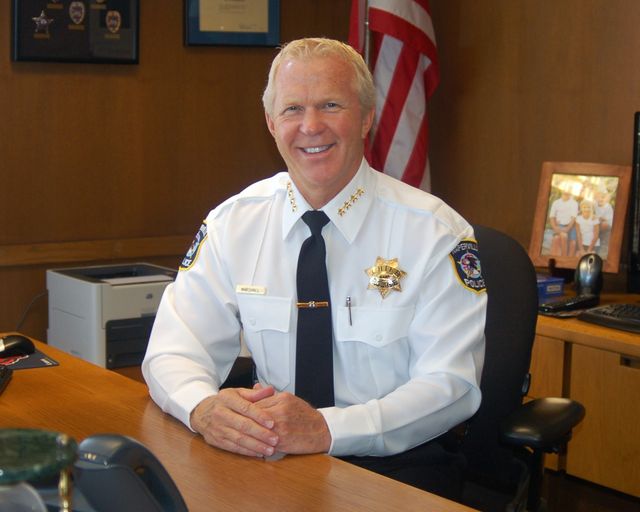 Chief of Police Robert Marshall has announced his retirement from the Naperville Police Department effective July 2, 2021, culminating a 44-year career with the City of Naperville, seven of which were spent in the City Manager’s Office.

Marshall has served as Naperville’s police chief since 2012, overseeing the department of approximately 275 staff members and directing all its operations and programs.

“Chief Marshall is a progressive leader whose integrity and dedication to public safety are evident in everything he does,” said City Manager Doug Krieger. “His leadership has strengthened the Naperville Police Department and the city as a whole and has led to incredible collaboration and a safer community.”

Chief Marshall began his career in law enforcement as a sheriff’s deputy with the Will County Sheriff’s Office in 1975. He joined the Naperville Police Department in 1977 and held the positions of police officer, investigator, sergeant, and lieutenant before retiring as a captain in 2005. He continued his service to the City of Naperville as the assistant city manager from 2005 to 2012, during which time he also spent a year as the city manager pro tem.

Upon his return to the police department in 2012, Marshall enhanced the department’s training program, putting an emphasis on scenario-based training and de-escalation strategies. He also developed practices to improve the culture of the department, deliver fiscally responsible budgets and significantly improve union relations. He also implemented a peer support team to help officers cope with the stressors of the job.

“Our community owes a debt of gratitude to Chief Marshall for his 44 years of service to Naperville, from his time patrolling our streets and investigating violent crimes to his years leading the police department,” said Mayor Steve Chirico. “Because of his service and leadership, Naperville has a forward-thinking, proactive and effective police department. That is one of the primary reasons our community continues to be recognized as one of the safest cities in America. I wish Chief Marshall the very best in retirement. He has definitely earned it.”

Marshall has a Master of Science Degree in Public Administration from DePaul University in Chicago and a Bachelor of Science Degree in Law Enforcement from Western Illinois University in Macomb. He is also a graduate of the Senior Executive Management Program for Police Executives at John F. Kennedy School of Government in Boston, Massachusetts, and the FBI National Academy in Quantico, Virginia.

Additionally, he has served as a volunteer board member for KidsMatter, 360 Youth Services, Fight Crime: Invest in Kids, and North East Multi-Regional Training (NEMRT). He is also a member of the Collaborative Youth Team and chairman of the Naperville Emergency Telephone System Board.

“This has been a difficult decision to leave the department and profession I love,” said Marshall. “My hope is that upon my retirement I leave a legacy of integrity, solid work ethic, strong core values, and a genuine care for the people I’ve served with.

“I know the police department is well positioned for continued success,” Marshall continued. “I am very confident in the skills and talents of the current leadership team and their abilities to lead our department forward.”

City leaders will meet in the coming weeks to identify the search and selection process for Naperville’s next chief of police.

Bill would push back the date of the 2022 primary elections, amid other major changes to the state’s election code.