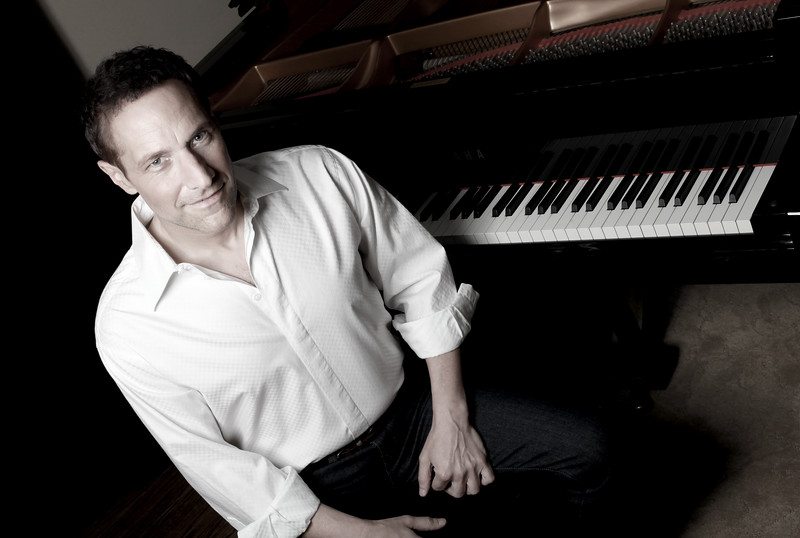 The hit-making songwriter is the best-selling solo pianist of our time earning 21 Number One albums and 32 Top 20 Radio Singles in the industry bible, “Billboard Magazine.” He’s garnered two Grammy nominations, gospel music’s Dove Award, two SESAC Songwriter of the Year Awards, and the Canadian Country Music Award. He also has a music scholarship named for him by his alma mater, the prestigious Cleveland Institute of Music.

Born and raised in Shaker Heights, Ohio, Brickman began his music training at the age of five. But young James wouldn’t conform to the rudimentary regulations of piano lessons. “He didn’t have the knack for it,’ his first teacher would say. That didn’t discourage the tenacious pianist from creating his own unique brand of musical storytelling.

Brickman is one of pop-music’s most fascinating success stories. He jumped from a career as a jingle writer of famous tunes for advertising, to reviving the romantic standard of the popular song. His first album release was 1995’s “No Words,” and he’s gone on to sell eight million albums worldwide.

“Hope,” “Faith” and “Peace” are truly at the heart of Jim Brickman’s passionate songwriting. “I write music to be shared — to soothe, to inspire, to celebrate, to love. To me, music is the pure and simple soundtrack to life’s most memorable moments.”

As a true artist that lives and breathes the music he creates, Jim Brickman is thrilled to introduce fans to his most recent songs and perform for them live in concert halls across the world.

Fox Valley Magazine:  At what age did you start performing publicly?

Jim Brickman:  Not counting piano recitals which I hated, My first tour was about 25 years ago when I was signed to my first label, Windham Hill..

Fox Valley Magazine:  How did the Cleveland Institute of Music prepare you as a musician?

Jim Brickman: When I was very young, I had a piano teacher who told my mom that I had no talent because I didn’t want to play the music as it was written on the page.  The teachers I had at CIM opened a new world of music encouraging me to find my own sound.  It was life changing.

Fox Valley Magazine:  The music business is very hard. When did you realize or have that “Ah Ha” moment that you could do this as a career?

Jim Brickman:  I don’t think there’s really an ah-ha moment while you are in the depths of find your way.  It was a process.  But I think when I first heard my music on the radio I realized that there was a chance it might work!

Fox Valley Magazine:  How did you segue from writing jingles to having a record deal and then  becoming a very successful live performance artist?

Jim Brickman:  The jingle business gave me a chance to write in so many different styles and genres from country to classical.  It also taught me how to pound the pavement to be heard.  When it was pointed out that so many of my jingles sounded like songs I thought maybe I could write music and songs that were longer than 60 seconds.  The live performance was never my intention. My first record company pretty much said “do it.”  So reluctantly I did.  Now I love it.

Fox Valley Magazine:  Why do think of yourself as a composer and songwriter first when you are obviously such a great piano player?

Jim Brickman: Yes, when I’m asked on an application for my occupation, i write songwriter.

Fox Valley Magazine: You have recorded and performed with quite a few celebrities, what have been some of your favorite vocal collaborations?

Jim Brickman:  I had a “pinch me” moment when I was recording with the great Johnny Mathis. I’ve always admired him and love his voice. Lady Antebellum, Kenny Rogers… and I got to perform with Kermit the Frog which was quite an experience.  Olivia Newton-John and I have become good friends since we first worked together.

Fox Valley Magazine:  Who would you like to record with or write a song for that you haven’t already?

Jim Brickman:  I like to find unknown talent so maybe it’s someone we haven’t heard of yet.

Fox Valley Magazine:  You perform most of your concerts without backup musicians, it’s just you on piano.  Do most of the audiences find this surprising and do you think it brings a certain amount of intimacy to your show?

Jim Brickman:  Yes, solo piano has a unique sound that is intimate and emotional.  When I was first starting out, record execs couldn’t understand how solo piano could possibly work. It’s not surprising anymore.

Fox Valley Magazine:  You are also a successful author with your books Simple Things, Love Notes: “101 Lessons from the Heart” and Soothe: “How To Find Calm Amid Everyday Chaos”. How does writing books serve as another creative outlet?

Jim Brickman:  There are so many life lessons that are accentuated with music.  The books take the reader on the journey I took to learn those lessons.

Fox Valley Magazine:  You also co-host your own radio show. The Jim, Brickman Show that airs on over 70 radio stations across the country. As a performer you get interviewed quite a lot.  How is it different to be on the other side of the table and be the interviewer?

Jim Brickman:  When I was being interviewed time after time, it dawned on me that I wanted to ask the questions. I’m a naturally curious person.  I love finding out about people, what makes them tick, and what makes them interesting.

Fox Valley Magazine:  Your “Share The Love Tour” is coming to The Arcada Theatre in St. Charles IL on Friday April 13th, what can concert goers expect?

Jim Brickman: The concert is an intimate setting perfect for holding hands or just chilling out. I play the hits, new music too.What the audience doesnt expect is that I tell stories about my observations in life… and they are often pretty funny.

Interviews Take Me Out To The Ballgame – Finally!

As our long COVID nightmare begins to recede, nothing will feel more like normalcy than a dog, a cold one and a Cougars’ game.