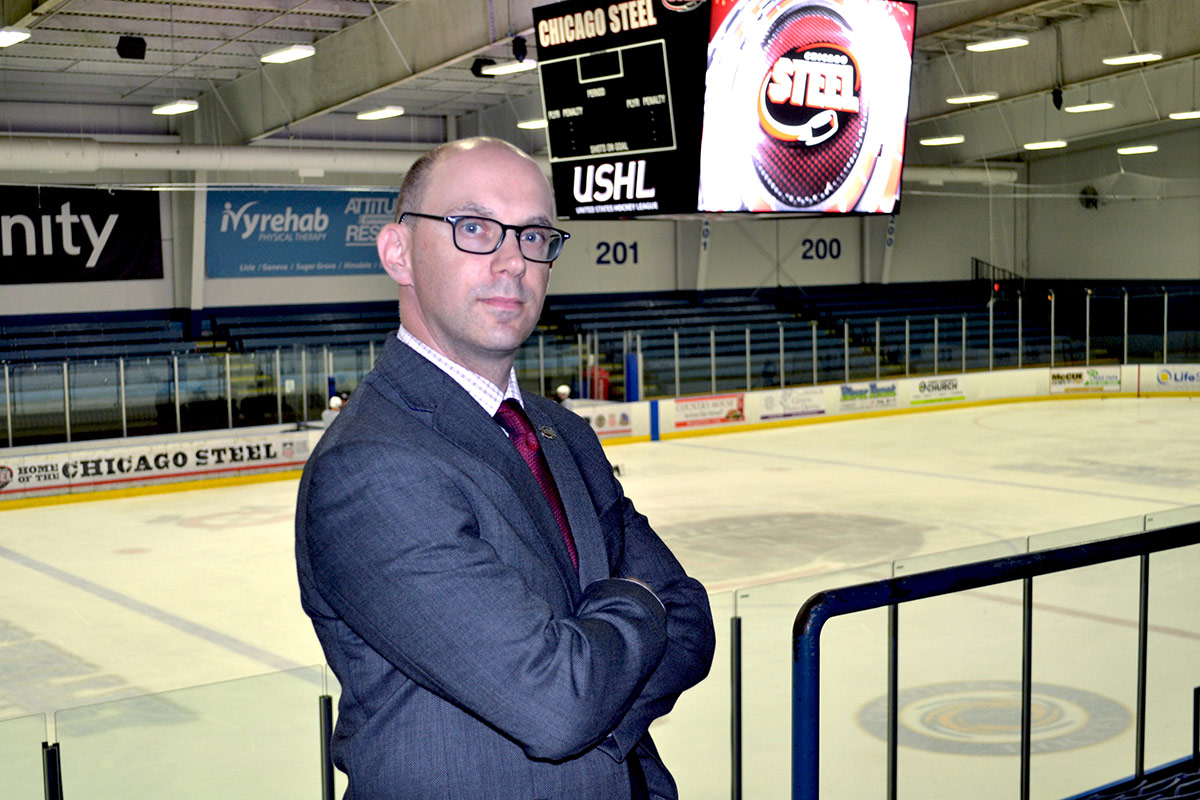 Kevin Ketchum: How did your eleven-year career in Minor League Baseball prepare you for hockey?

Dan Lehv:  While the sports are obviously different, the core of each business is creating a memorable experience by providing great customer service and an outstanding product on and off the ice or field.  During my time in baseball, I worked for two teams (Charleston RiverDogs and St. Paul Saints) that started the trend of innovative promotions, giveaways and experiences at the minor league level that really came to the forefront in the 2000s.  I played a role in some of the most memorable promotions in minor league baseball history while working for Mike Veeck who made having fun at the ballpark fashionable regardless of what’s happening on the field.  You can do and try things in the minor leagues that you can’t get away with at the major league level, and I was fortunate to work with leaders in the industry who understood that only a small percentage of fans are coming to the ballpark with a vested interest in whether the team wins or loses.  The vast majority of fans are there for a night of affordable entertainment and a chance to gather with friends, family, co-workers or clients and a three-hour diversion from everything else that’s going on in the world.

Kevin Ketchum: Was the transition easy or were there differences in front office management between the two sports?

Dan Lehv:  Well, I certainly don’t miss rain delays.  I still have moments where I’m lying in bed hearing rain hit the roof and jump up thinking we need to put the tarp on the field.  While the businesses are very similar (ticket sales, sponsorships, concessions/merchandise), a much higher percentage of the hockey audience is truly vested in the on-ice success of the team compared to minor league baseball.  It created a different sort of challenge to make sure that we weren’t just building our business on fun and irreverent promotions, but also making sure that we embraced hockey culture and the passion of our most loyal fans.  There was also a big difference from professional baseball where the average player was in his early 20s and the numbers were stacked against him to get to the big leagues to all of a sudden moving to a league of amateur athletes in their upper teens who are some of the most talented players in the world, the majority of whom are heading to the best colleges in the country and ultimately a shot at playing in the NHL.  Beyond that, we needed to find host families for players, develop relationships with area school districts, find tutors and provide academic support, communicate with parents and help provide guidance to athletes at a much younger age.  The schedule is also very different.  In baseball, it’s a four or five-month sprint with eight-game homestands and very little down time.  In hockey, it’s the opposite with a much longer season, but generally only one or two games per week which allows for more time to focus on the planning and execution of each event.

Kevin Ketchum: You joined Chicago Steel Hockey in 2015 after 4 successful years building the Dubuque Fighting Saints. What attracted you to the Geneva area and the Fox Valley Market?

Dan Lehv:  Having a young family, this area was a big selling point.  When we moved to Geneva, my wife and I had a one-year old daughter and since that time, we’ve celebrated the birth of our son.  As your readers know, this is an incredible place to raise a family.  From the Steel perspective, our players come from all over the world to play in the USHL and that commitment means leaving home to live with a host family.  We try to do whatever we can to ensure a smooth transition, and this area has proven to be a great location for our players to live and go to school.

Kevin Ketchum: Well you and the whole Chicago Steel Hockey staff certainly spearheaded a major turnaround by winning the USHL’s championship (Clark Cup) for the first time in the team’s history in May 2017.  What changes and key factors do you attribute the team’s success to?

Dan Lehv:  It starts with our owner, Larry Robbins.  When Larry purchased the Steel in 2015, he set out to build a development model that would be unmatched in junior hockey and provided the organization with much-needed resources to do so.  Through developing each player, not only would we help them accomplish their on and off-ice goals at the USHL, collegiate and professional levels, but it would ultimately lead to success on the ice.  The on-ice success probably happened more quickly than we could have hoped for and is a testament to the work of our hockey staff, in particularly our Head Coach at the time, Dan Muse, whose tireless efforts paid off in the Clark Cup title and created an opportunity for him to become the first coach to make the jump from behind the USHL bench to behind an NHL bench in the next season when he was hired by the Nashville Predators as an assistant coach.  The development model has continued to evolve the past two years with the outstanding work of Ryan Hardy as our General Manager and Greg Moore as our Head Coach, culminating in an Eastern Conference Championship and trip to the Clark Cup Final this past May after being picked 16th of 17 teams in the preseason power rankings.  We have also developed a partnership with Darryl Belfry, one of the most innovative skills coaches in the world who works with top NHL stars and visits regularly to work with our players.  Our staff works within an atmosphere of collaboration to ensure the best opportunity for each player to develop to his fullest potential.

Kevin Ketchum: Besides obviously having a winning team, how else are you building a loyal fan base?

Dan Lehv:  As you’ve referenced, our product on the ice is incredible.  These are the best players in the world playing here in Geneva.  Last year, Jack Hughes played on our ice surface in February and this December will be playing at the United Center when the New Jersey Devils come to town as the #1 overall pick in this year’s draft.

Beyond the great hockey, there’s so many compelling reasons to attend a Steel game. One of the best things about the minor leagues is access to the players.  We have autographs after every game including five times during the year you can go on the ice and skate with the team. We cater our product to non-hockey fans as well, with themed promotions every game.  We have fun games and promotions during intermissions and stoppages in play like “human slingshot bowling” or the chance to challenge our mascot, Rusty.

Our product is affordable with tickets starting at just $10 and free parking.  You can sit on the glass in the best seat in the house for just $20, less than you’ll pay for parking at a major league event.  Not only are sight-lines great, but we have a state-of-the-art videoboard for replays and fun videos during the game.

We provide experiences for groups like our Youth Hockey Experience that gives teams a chance to play an intermission game and stand on the blue line next to the Steel while a school group performs the National Anthem and scouts present the Colors on the ice.

We’ve also developed relationships with area businesses that use us for hosting their employees, customers and clients whether it’s a group outing, a night in one of our suites or a unique group outing on the glass in one of our Budweiser Lounges.

We’ve built our fanbase by providing a family-friendly product for hockey and non-hockey fans alike.

Kevin Ketchum: Since 2015, how much increase in attendance have you seen?

Dan Lehv: Since 2015, we’ve seen a 40% jump in attendance including an increase in our attendance each season.  It’s a testament to the hard work of our front office staff.  We’ve been able to grow the number of Steel season ticket holders primarily through offering flexible mini-plans that start at just 5 games for $45.

Kevin Ketchum:  The Chicago Steel are also active members in the community with your “Live Strong as Steel” assembly program. Could you tell us about it.

Dan Lehv:  We’re really proud of our Live Strong As Steel program which we offer to schools at no cost.  We’ve presented the program to over 9,000 students over the past three years.  We developed the program in partnership with Two by Two Character Development, a non-profit organization that promoted character traits such as responsibility, empathy, kindness and citizenship.  The program is geared towards elementary school students and we have Steel players, a coach, and our mascot Rusty visit the schools for a 30-45 minute assembly program to discuss how the kids can “Live Strong As Steel” at home, at school and on a team while also teaching them about the game of hockey.  I’d encourage every school in the area to take advantage of this great program.

Kevin Ketchum: Chicago Steel Hockey has also put together a great promotions schedule for the 2019 – 20 Season. What are some of unique theme nights, giveaways and ticket specials you’ll be having?

Dan Lehv:  We put a lot of work into our promotions schedule each season.  With this being our 20th Season, we’re excited about a few giveaway items in particular including a special 20th Season Youth Replica Jersey Giveaway on Mar. 15 and a Year 2000 Rusty Bobblehead Doll Giveaway on Jan. 18.  We’re also giving away Zamboni Coin Banks on Dec. 28.

We’re also excited about several new promotions for this season including The Simpsons On Ice (Nov. 2) to celebrate 30 years of the TV show, Olaf Day (Dec. 29) for everyone’s favorite snowman, and we can’t wait for the non-stop action of Turtle Races on Nov. 29.

There will be many memorable moments to support great causes with our annual Military Appreciation/Hometown Heroes Night (Mar. 14) with a special jersey auction to benefit the Wounded Warrior Project, plus a new Hockey Is For Everyone event on Nov. 23.

Kevin Ketchum: So, when is Opening Night and what can fans expect this season?

Dan Lehv:  Opening Night is Saturday, October 5.  The night will begin with the unveiling of our 2018-2019 Eastern Conference Championship Banner and conclude with the opportunity for fans to get autographs from the entire Steel team after the game.  Being our 20th Season, it’s a special year for the Steel and we can’t wait to share the excitement with our fans.

Interviews Take Me Out To The Ballgame – Finally!

As our long COVID nightmare begins to recede, nothing will feel more like normalcy than a dog, a cold one and a Cougars’ game.