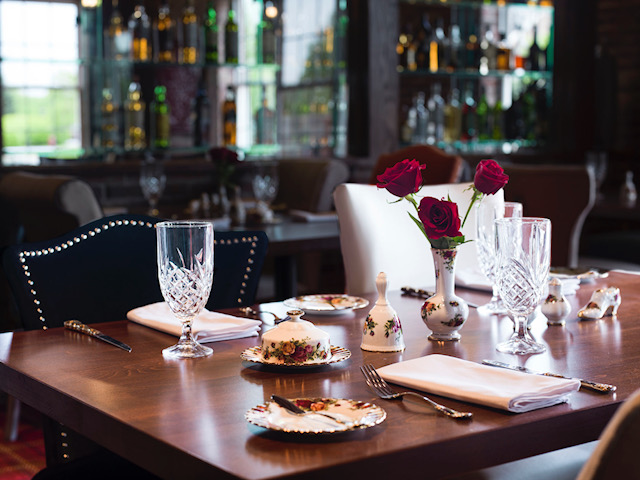 On Monday, July 9, Balmoral Restaurant celebrated its Grand Opening with bagpipers, Scottish dancers, magicians, a $500 giveaway, hors d’oeuvres and an Open House to showcase all that has gone into the creation of this unique culinary concept. The restaurant had a soft opening on June 4, and since then has amassed more than 50 five-star reviews online.

The restaurant opened at 11am, but the real festivities began at 4pm, with a quarter-mile bagpipe and Scottish dance processional, ending at the restaurant.  From then, dancing and piping will continued into the evening.  Owner Colin Smith has strong opinions about what constitutes authentic Scottish food.

“Balmoral is the only truly authentic, traditional Scottish food in the United States,” Smith says.  But he should know – as he spent years working at, chefing in, and ultimately owning many different restaurants in England and Scotland before coming to the States. Balmoral Restaurant is Smith’s first establishment in the U.S., which he has spent nearly 3 years building in Campton Hills, Illinois – on the western edge of St. Charles in the Fox Valley.

The restaurant takes its name from Balmoral Castle, one of the greatest castles still owned by the British monarchy, first purchased by Prince Albert in 1856 for Queen Victoria. Mr. Smith has long fancied it to be an exemplar of Scottish culture and aristocratic flair.  For his restaurant, Smith borrowed liberally from the style of place settings, right down to the exact china and crystal used at the castle.  In addition, the interior of Balmoral Restaurant features designs and murals and military lore, to evoke the Scottish experience for restaurant-goers.

Owner Smith has worked closely with Executive Chef Ryan Kacenjar to create a one-of-a-kind menu.  Menu items include pheasant, rabbit, venison, duck – as well as many favorite items prepared with a Scottish twist.  With more than 20 entrees, there are plenty of options to choose from.

Stop in Balmoral for maybe have a drink or one of the delicious appetizers, or a dessert by in-house pastry chef Rebecca Weaver – if not a full meal of Grand Scottish Fare.

Inspired by Nostradamus, because after you’ve enjoyed one, or seven you will be able to see into the future.

One of a series from the June 2021 issue of Fox Valley Magazine.