With a unique combination of intensity, enthusiasm and technical clarity, American conductor Andrew Grams has steadily built a reputation for his dynamic concerts, ability to connect with audiences, and long-term orchestra building.  He’s the winner of 2015 Conductor of the Year from the Illinois Council of Orchestras and has led orchestras throughout the United States including the Chicago Symphony, Detroit Symphony, National Symphony Orchestra, St. Louis Symphony, Cincinnati Symphony, Baltimore Symphony Orchestra, Philadelphia Orchestra, Dallas Symphony, and the Houston Symphony.

Andrew Grams became music director of the Elgin Symphony Orchestra after an international search. His charismatic conducting and easy accessibility have made him a favorite of Elgin Symphony audiences.  A frequent traveler, Mr. Grams has worked extensively with orchestras abroad, including the Toronto Symphony Orchestra, Montreal Symphony Orchestra, Vancouver Symphony Orchestra, Orchestre National de France, Orchester der Beethovenhalle Bonn, BBC Symphony Orchestra London, Sydney Symphony, Melbourne and Adelaide Symphony Orchestras, and New Zealand Symphony Orchestra. Born in Severn, Maryland, Mr. Grams began studying the violin when he was eight years old. In 1999 he received a Bachelor of Music in Violin Performance from The Juilliard School, and in 2003 he received a conducting degree from the Curtis Institute of Music where he studied with Otto-Werner Mueller. He was selected to spend the summer of 2003 studying with David Zinman, Murry Sidlin and Michael Stern at the American Academy of Conducting at Aspen and returned to that program again in 2004.  Mr. Grams served as Assistant Conductor of The Cleveland Orchestra from 2004-2007 where he worked under the guidance of Franz Welser-Möst, and has since returned for several engagements.

Danielle York Miller, soprano, has performed numerous roles including Pamina in The Magic Flute, Susanna in The Marriage of Figaro, the title role in Zaide and Lucy in Menotti’s Telephone. Mrs. Miller has performed with the Florentine Opera Company, The Skylight Opera Theatre and the Milwaukee Opera Theatre. She has appeared as a soloist with the Bay View Music Festival in Michigan, performed as a soloist with the Sinfonietta Bel Canto orchestra, and sang a role in their production of Suor Angelica this past November. She recently sang the role of Mrs. Banks in Mary Poppins and acted the role of Chelsey Thayer in On Golden Pond. Mrs. Miller received her vocal performance degree with honors from Connecticut State University.

In 2018, Kathryn Siegel, violin and Marty Hackl, violin/viola formed their duo, Syncronia. Currently they are preparing repertoire for recitals and for the concert stage with orchestra. Kathryn has been performing for over two decades with orchestras on many concert stages. She played with the Gulbenkian Orchestra of Lisbon, Portugal for 6 years, touring Europe and South America. She is currently a member of the Elgin Symphony Orchestra and the Rockford Symphony Orchestra. Marty has been a Chicago area performer for many years as a recitalist, and as a member of many of the region’s notable ensembles, including the Chicago Chamber Orchestra, the Illinois Philharmonic Orchestra, Light Opera Works, the Northwest Indiana Symphony, and the Rockford Symphony.

Sarah Sabet began her violin studies at the age of 6 with Bill Kronenberg through Music For Youth of Arlington Heights. Throughout her years as a Communications student at Elmhurst College, Sarah remained active as a violinist, serving as Associate Concertmaster of the Elmhurst College Philharmonic Orchestra and participating in several chamber ensembles. She performs regularly with the Elmhurst Symphony Orchestra and enjoys freelancing throughout Chicago for various orchestral and chamber music performance opportunities. Outside of violin performance, Sarah works as a Marketing Associate at Lyric Opera of Chicago and enjoys regularly attending Chicago-area concerts and performances, including the Elgin Symphony Orchestra. Sarah resides in Arlington Heights where she has most recently studied with Elgin Symphony Principal 2nd violinist Daniela Folker, and currently studies with Lisa Fako.

The Elgin Symphony Orchestra (ESO) offers programming unmatched for an entertaining, informative and relaxing cultural experience. The ESO has won Illinois Professional Orchestra of the Year an unprecedented four times* – in 1988, 1999, 2005 and 2016 – and works to create an enjoyable entertainment experience that goes beyond the magnificent music performed by some of the best musicians in the region. There is accessible, free parking around the Hemmens Cultural Center and valet service available.  Area student musicians often perform in the lobby before concerts and patrons can purchase unique, music-themed gifts at the Elgin Symphony League Boutique.  Pre-concert chats are given by Music Director Andrew Grams, guest artists and others one hour before Classics Series performances and Saturday night patrons are invited after concerts to Mingle with the Musicians at area restaurants. In addition, free Listeners Club lecture/discussions presented by music historian Jim Kendros are offered before ESO Classics Series concert weekends on Wednesdays at 11 am at GreenFields of Geneva and 1 pm at the Gail Borden Public Library. Patrons can curate their own series with a Build your Own Series. If a patron can’t make a concert, the ESO offers free exchanges to subscribers and to single ticket buyers for a small fee. The ESO is a world-class orchestra providing quality musical explorations that are entertaining, hassle-free and conveniently located close to home in the western suburbs.  The ESO-Transforming the Symphony Experience. For more information, visit ElginSymphony.Org. 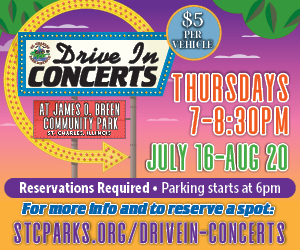 “The 50th Anniversary Show” opens July 13 at the Norris Cultural Arts Center in ...