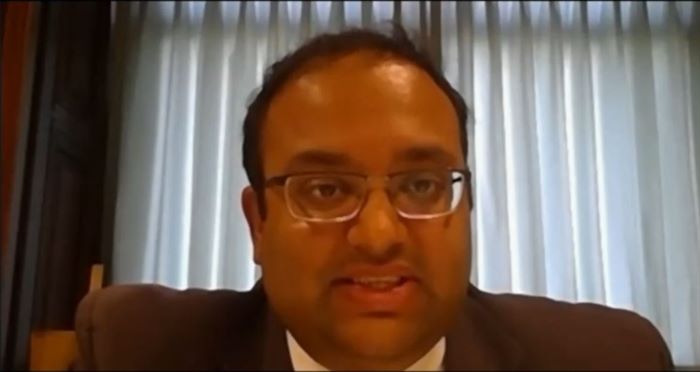 SPRINGFIELD – Legislation that would overhaul sex education in Illinois and a measure to decriminalize the transmission of HIV were among several bills that passed the Senate Executive Committee Wednesday.

The committee, following a long and contentious debate, advanced legislation that would require public schools to teach sex ed by July 2023.

Senate Bill 818 and two amendments attached to the bill would mandate schools to include “comprehensive personal health and safety education and comprehensive sexual health education” in the curriculum for the subject.

Introduced by Sen. Ram Villivalam, D-Chicago, the legislation would require age-appropriate education for students grades K-12 on the subject of consent among other additions to the sex ed curriculum.

“The Catholic faith includes very specific beliefs on human sexuality. We teach these beliefs in our schools,” Zach Wichmann, of the Catholic Conference, said. “It’s part of our Catholic school culture. Any attempt by the state to interfere in this is an unconstitutional violation of the free exercise of religion.”

Proponents of the legislation testified that children are most vulnerable to sexual abuse between ages 7 and 13, with the median age of abused minors being 9 years old. By educating children at an early age about appropriate and inappropriate conduct, they have the tools to report to adults when they are suffering from abuse, advocates said.

“Across the country, and of all the children referred to children’s advocacy centers in the state of Illinois, 60 percent of them are younger than 12,” Julia Strehlow, of the Chicago Children’s Advocacy Center, told lawmakers Wednesday. “The (U.S. Centers for Disease Control and Prevention) refers to child sexual abuse as a preventable public health problem and Senate Bill 818 would contribute to prevention of this problem.”

Representatives of the Illinois Association of School Boards and the Catholic Conference of Illinois testified against the bill.

Private and charter schools under the state’s Critical Health Problems and Comprehensive Health Education Act, are required to provide education on the prevention, transmission and treatment of sexually transmitted infections.

SB 818 amends the statute that such education would have to be “medically accurate” and “culturally appropriate,” the latter being defined in the bill as affirming of gender identity, gender expression, sexual orientation and sexual behavior. It also removes the inclusion of abstinence-only education.

“The Catholic faith includes very specific beliefs on human sexuality. We teach these beliefs in our schools,” Zach Wichmann, of the Catholic Conference, said. “It’s part of our Catholic school culture. Any attempt by the state to interfere in this is an unconstitutional violation of the free exercise of religion.”

A coalition representing Catholic, Islamic, Orthodox Judaism and Baptist schools submitted opposition to the bill along the same lines.

The IASB said it didn’t oppose the spirit of the legislation, but the fact that it creates an unfunded mandate for sex education instead of leaving the decision to local districts.

“We have concerns about the growing number of mandates, as well as implementing an entirely new curriculum,” Zach Messersmith, representing IASB, said.

According to Messersmith, school districts would need to hire new faculty or fund more training for staff in order to satisfy the new sex education standards.

Given the state’s flat funding for education, and the ongoing teacher shortage, Messersmith said many school districts would be unable to meet the mandate.

Under the bill, parents can opt their students out of sex education with no penalty to the student by submitting a written objection.

The committee voted to advance SB 818 in an 11-6 vote along partisan lines.

The Executive Committee also advanced an amendment to House Bill 1063, filed by Rep. Carol Ammons, D-Urbana, and sponsored in the Senate by Sen. Robert Peters, D-Chicago. It passed through the committee in an 11-4 vote to advance to the Senate floor.

Current Illinois law allows for individuals to be charged with “criminal transmission of HIV,” while also allowing for law enforcement to compel criminal defendants to test for HIV/AIDS in order to determine whether to charge them for the crime.

“Those living with HIV deserve to be able to receive treatment for their condition, and not risk arrest or incarceration,” Peters said in a release Wednesday. “It’s time we end the stigma surrounding sexually transmitted diseases and start treating them like the medical conditions that they are.”

The bill would eliminate the charge from Illinois statute, and would amend the AIDS Confidentiality Act –a statute that protects Illinoisans from having an HIV-positive status disclosed – to remove exemptions for law enforcement from the provision.

Lawmakers in the House voted 90-9 last month to pass the legislation. It now only needs majority support in the Senate to be sent to Gov. JB Pritzker for his signature.

Other legislation advanced by the committee Wednesday includes a provision that allows teachers unions to collectively refuse to go to work due to abnormally dangerous health and safety conditions, such as the COVID-19 pandemic, and another extending by three years the length lottery funds will go towards Alzheimer’s disease care.