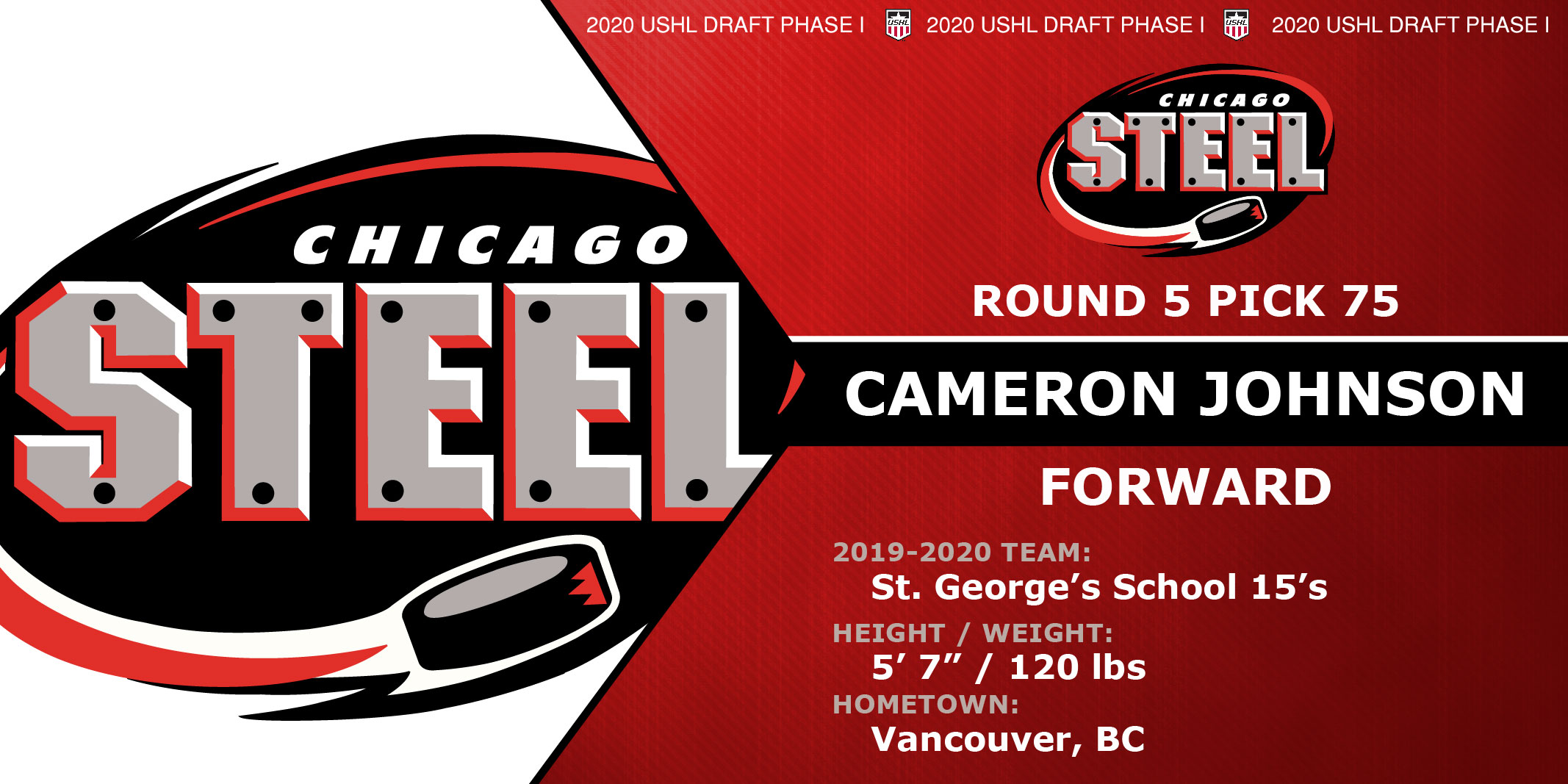 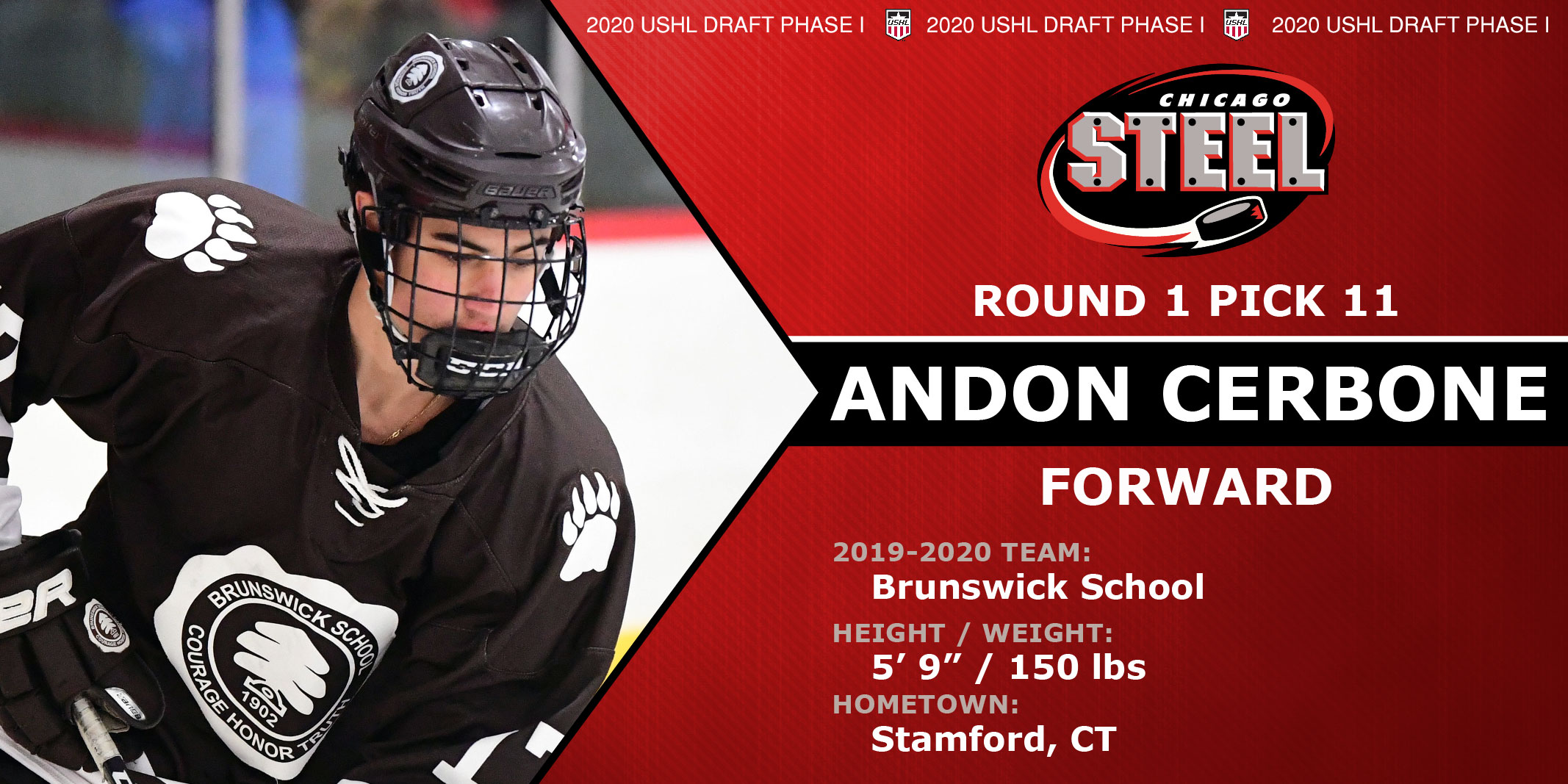 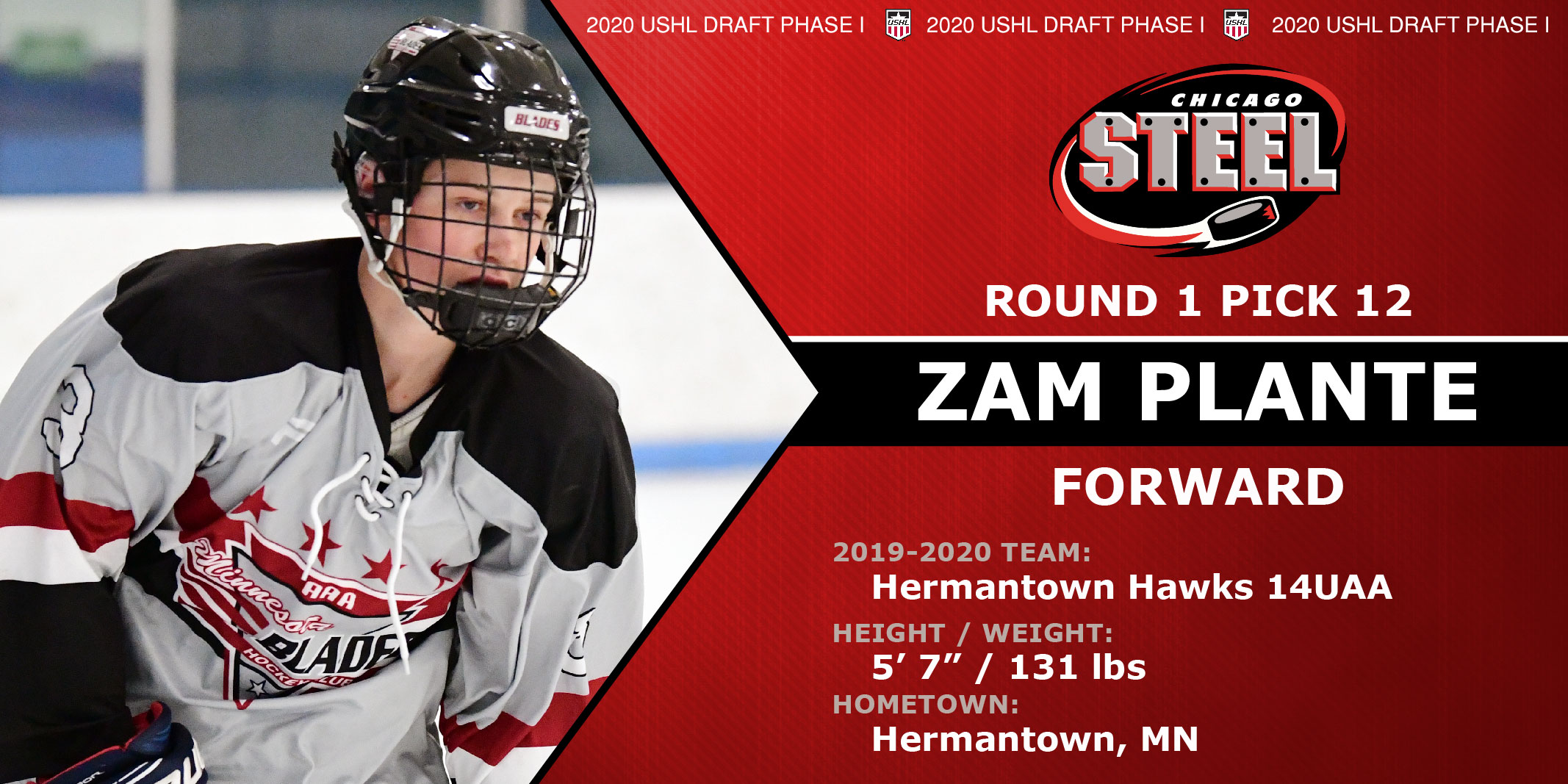 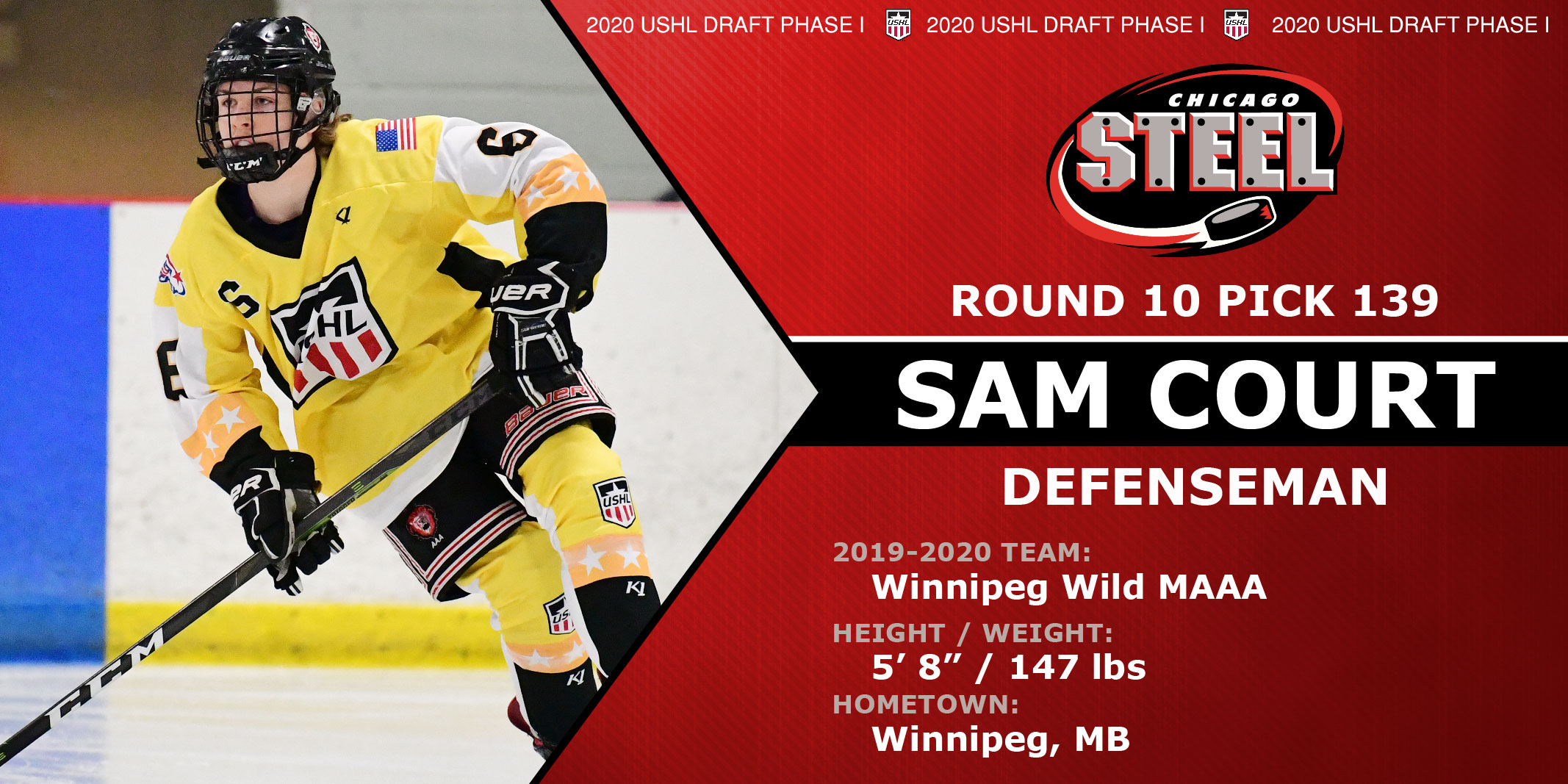 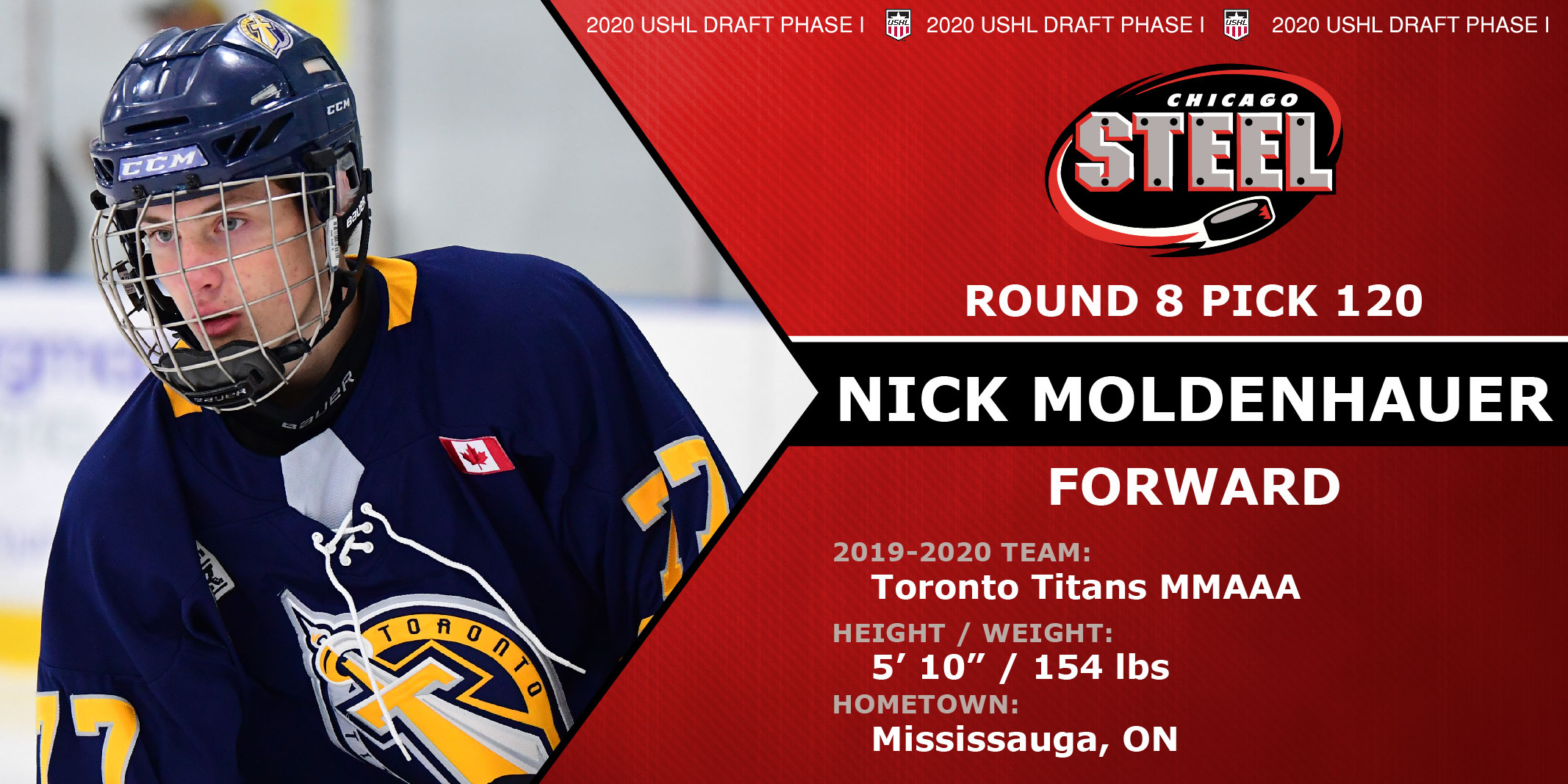 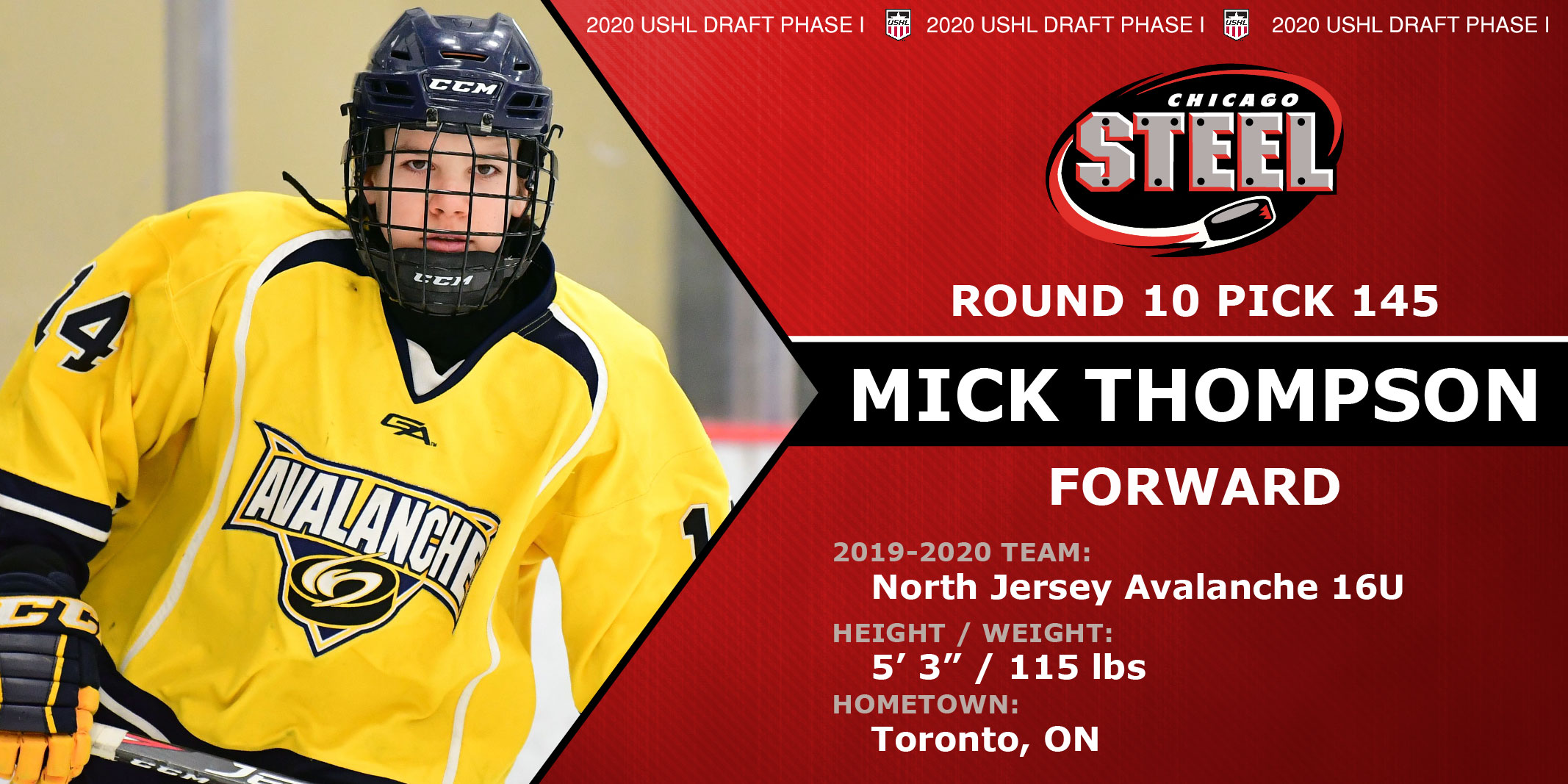 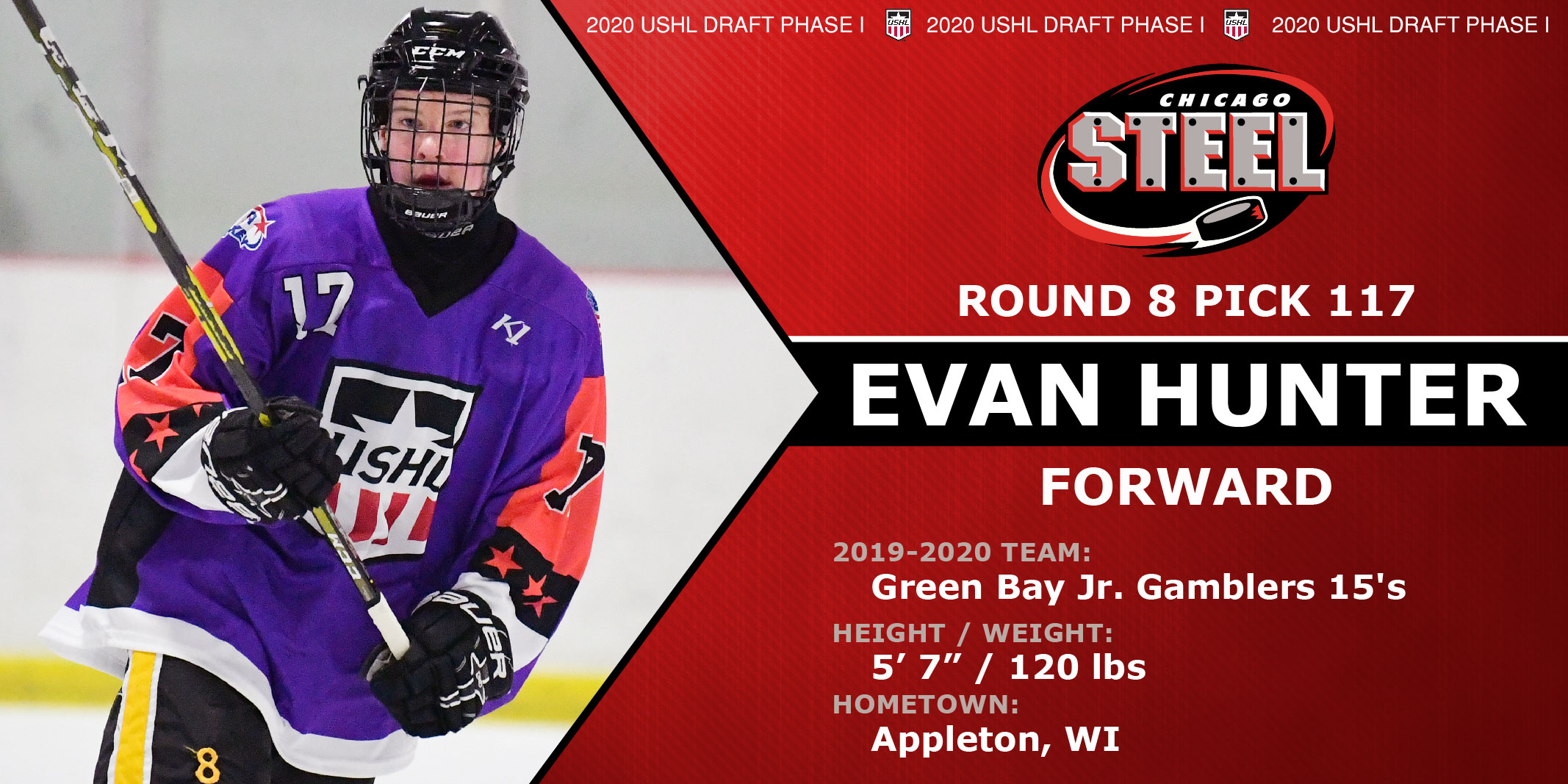 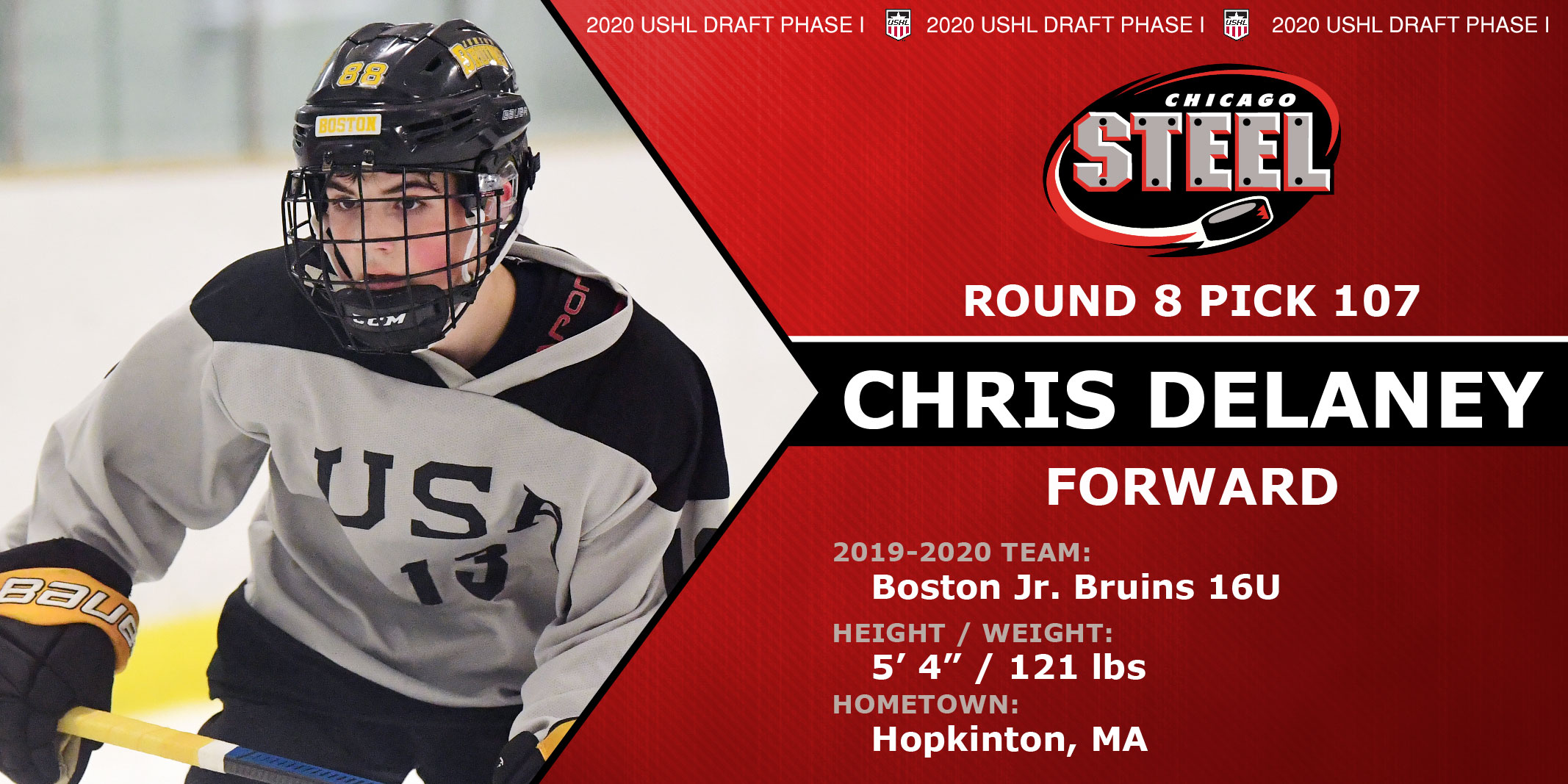 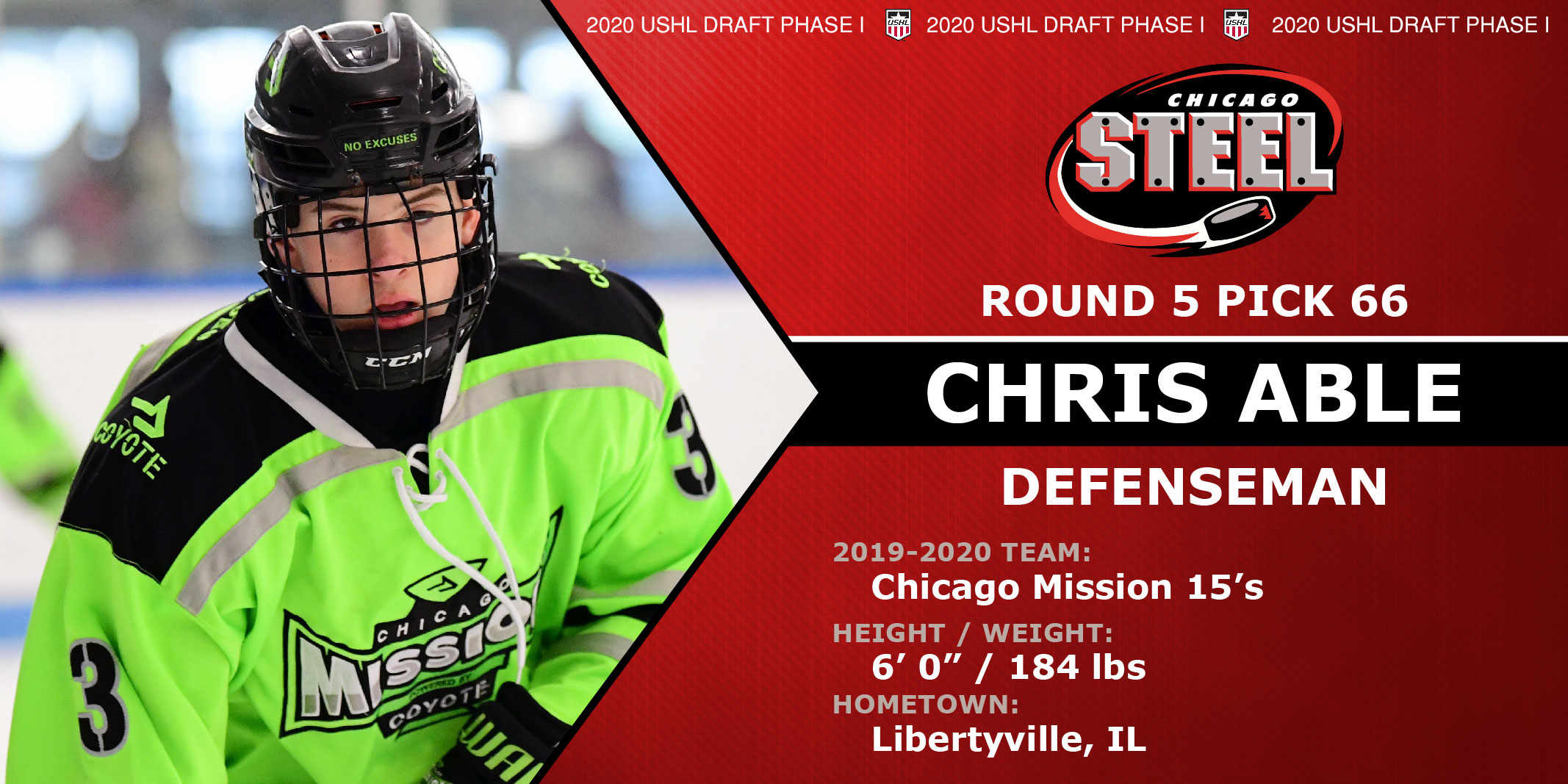 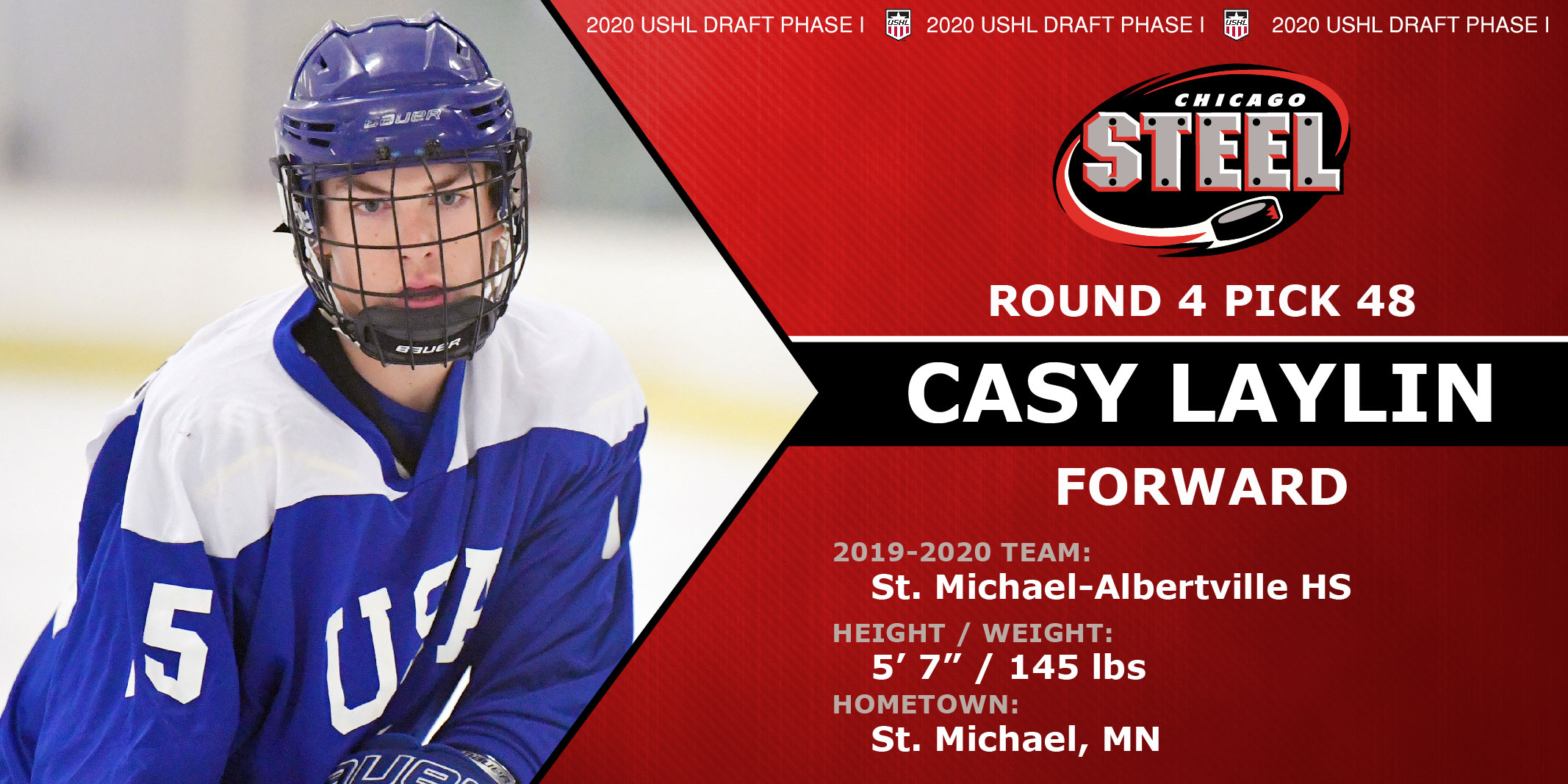 The Chicago Steel selected eight forwards and two defensemen from the 2004 birth year Monday in the USHL Phase I Draft.

“Teams are often hyperbolic in their post-draft assessments but for us, it’s relatively simple.” said Steel General Manager Ryan Hardy. “We had a plan and we executed that plan. The players that we selected fit our clearly defined criteria which is synergistic with our clearly defined style of play. We are very excited to welcome them and their families to our Chicago Steel family and very much look forward to influencing their development in the years to come.”

The Steel began the process of adding players from the 2004 birth year with two tender agreements during the month of March, signing defenseman Jake Livanavage on March 24 and forward Adam Fantilli on March 25.

In accordance with the USHL tender agreement process, the Steel agreed to give up the team’s first two original selections in the Phase I Draft (Round 1, Pick 15 & Round 2, Pick 30).

Cerbone amassed 11 goals and 36 helpers in 31 games played with Brunswick School in Greenwich, Conn., during the 2019-20 campaign.

In addition to serving as captain of the Hermantown Bantam AA club in Minnesota, Plante paced the Minnesota Bantam Elite League North Stars with 25 points (11G, 14A) through 14 outings this year.

Chicago added to their offensive firepower with another playmaking forward in the 4th Round, selecting Casy Laylin (Forward – St. Michael, Minn.) with the 48th pick overall. The 5-foot-7, 146-pound skater led St. Michael-Albertville High in assists with 36 helpers and picked up eight markers through 24 games. Chicago selected Casy’s brother, Luc, during the 2019 USHL Phase I Draft in the 11th Round (165th overall).

The Steel picked up home-grown talent with the choice of Chris Able, a defenseman who skated for the Chicago Mission U15 club this season. The Libertyville, Ill., native and Ohio State University commit played in 14 contests this year, recording two goals and six helpers.

Chicago chose Cameron Johnson with the 75th pick overall in the 5th Round, a Canadian-born forward. Johnson held the scoring lead for the St. George’s School Elite 15s in Vancouver, British Columbia, during the 2019-20 campaign, charting 78 points (29G, 49A) in the regular season with five goals and two helpers in just two playoff contests.

Hunter, a 5-foot-7, 119-pound skater, played for Minnesota Bantam Elite League Wisconsin this past season with previous experience playing for the Green Bay Jr. Gamblers. The forward is a relative of USHL Alum and NHL veteran, Joe Pavelski.

Chicago rounded out the Phase I Draft by selecting Sam Court (Defenseman – Winnipeg, Manitoba) and Mick Thompson (Forward – Toronto, Ontario) with two selections in the 10th and final round of the Phase I Draft.

As a defenseman for the Winnipeg Wild AAA team, Sam Court was nearly a point-per-game skater with 37 points (8G, 29A) in 38 outings this season.

Thompson split his 2019-20 season between the North Jersey Avalanche 16U team and Bergen Catholic High in Oradell, N.J. The 5-foot-3, 115-pound forward ranked third in goal-scoring for the Avalanche, tallying 14 markers in addition to 19 assists.

The 2020 USHL Draft concludes Tuesday, May 5 with Phase II beginning at 1:00 pm CT for eligible players born from 2000-2004.  Barring a trade, the Steel are not scheduled to make a pick until the 88th overall selection (6th round), a result of previous trades of Phase II picks.

The Steel will draft until it fills its roster to 45 which includes veteran players from the 2019-2020 season, selections from Monday’s Phase I and players that were previously on the team’s Affiliate List.

The Steel were awarded the 2020 Anderson Cup as the regular-season champions of the United States Hockey League after posting a 41-7-1-0 (83 pts) record, a franchise-best for wins and points in a season. Chicago set league records with an .847 win percentage and an average of 4.94 goals per game prior to the cancellation of the regular season and Clark Cup Playoffs on March 18.

Rescheduled Shows at The Arcada Theatre

Brisson becomes first forward in team history selected in the first round of the ...

Every Home Game Will Offer Unique Experiences The Chicago Steel today announced their 2019-20 ...