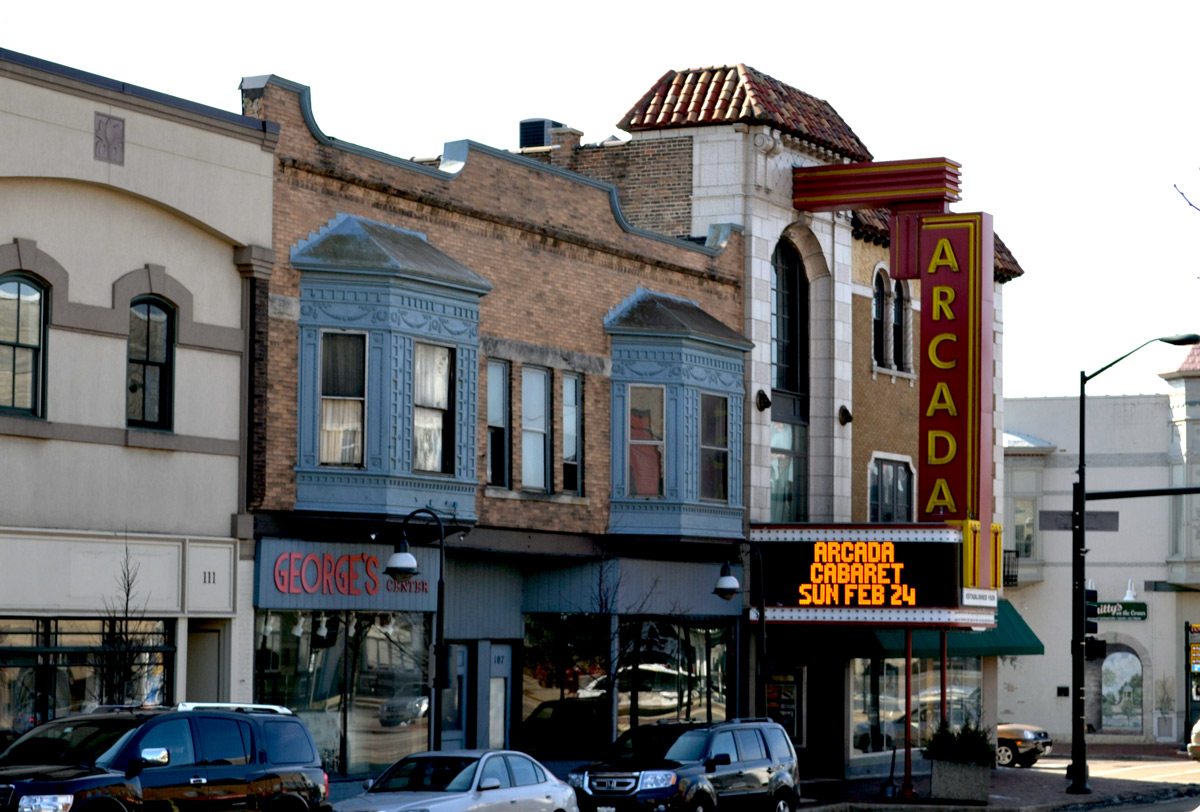 It was on September 6, 1926 that the 900-seat Arcada Theatre first opened its doors to a Vaudeville audience and a short “Our Gang Comedy” film.  Eighty years later, Ron Onesti came to St. Charles, Illinois to take over the reins of the theatre, and turned it into one of the most popular live music venues in the country, often referred to as “iconic”.

Now, in response to the theatre’s popularity coupled with Onesti’s desire to create a one-of-a-kind entertainment and dining experience for his guests, the ninety-four year-old gem is getting a facelift. 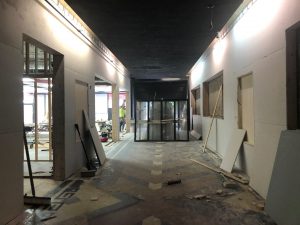 Coinciding with the COVID-19 lockdown that shuttered The Arcada since March, Onesti, with new owners Curt and Conrad Hurst, has been re-designing, re-purposing and re-imagining practically every square inch of the building.

“For fifteen years we have been creating life-lasting memories for thousands of music lovers of all ages,” Onesti said.  “But the building was tired, hot in the Summer, cold in the Winter.  And definitely, restroom-challenged!  But then the Hurst’s stepped up, with a civic pride that I have never seen before.”

It began months ago when Curt and Conrad sat with Onesti in his office to get Ron’s vision for the future.  It was a timely question because Ron was beginning to have some doubts about another fifteen-plus years in St. Charles.

“Its not like I was holding a gun to anyone’s head, including the city’s,” Onesti said.  “We just grew this thing to the level of international notoriety with sellout crowds all the time.  I could not in good conscience do my thing and bring thousands of concert lovers and legendary performers to our building, and not give them the comfortable and healthy experience they expected.  So I thought it may be better if I moved to a bigger and more contemporary venue.” 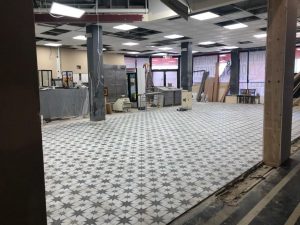 The Hurst’s weren’t having it.  They bought the building, rolled up their sleeves and asked Onesti to come up with a plan that would upgrade the customer experience that would make him WANT to stay.

“Besides all the things that folks clamored for on a regular basis concerning restrooms and HVAC, I began to recall the hundreds of times my thoughts began with the phrase, ‘I wish I had (BLANK) at the theatre’.  The guys supported every one of my wishes with a ‘Sure, that would be great’ attitude about EVERYTHING!  They have truly been a Godsend.” 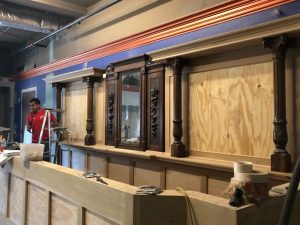 Floor by floor, the changes will be astounding.  Beginning on the third floor, the Club Arcada Speakeasy has newly done floors and enlarged kitchen and server’s facilities.  This will mean an expanded menu, faster service and a more beautiful dance floor area.

The second floor will have some pretty major changes happening on it.  The small window bar has been expanded to a larger walk-in bar.  What used to be the House Pub second-floor event space is now a luxurious VIP experience.  It will be a country club-style endeavor with cherry wood walls, upscale food and beverage offerings and celebrity access, when available.  Where the second floor rest rooms previously were are newly renovated restrooms reserved strictly for the VIP Room. 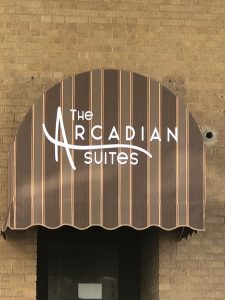 The offices down the hall from the bar have been gutted and remodeled as ten new restrooms!  Where the Onesti Entertainment corporate offices were located further down the hall is currently being joined together with the second floor of what used to be George’s Sporting Goods, the building immediately east of the Arcada.  That floor is being transformed into The Arcadian Suites!  Nine hotel super-suites, themed and very “experiential”.  Imagine staying overnight in the Sinatra Suite, the Elvis Suite, the Zeppelin Suite, the 60s, 70s or 80s Suite, the Motown Suite or the Nashville Suite!

The first floor has the most changes.  In the space on the west corner of the building, formerly Starbucks, is now the “Rock ‘N Za” wood fired pizza experience.  Hand stretched individual pizza, creative salads, grilled and Chicago-style hot dogs, gourmet popcorn and pretzels and flavor-burst soft serve ice cream will be the fare offered.

Rock ‘N Za will also be the location of Arcada merchandise available for purchase, and where the visiting bands will sell its t-shirts, photos and CDs.  There will be seating for the grab-n-go food and beverages and a vintage pinball machine corner with games by KISS, Aerosmith, Beatles, ELVIS, Metallica and   Guns ‘N Roses.   A lot going on here!

Further down the main Grand Hallway will be, yes, more restrooms!  Another ten facilities!

Where the former Rock Stock store was is now “Bar-Cada”, with an enlarged entrance and a full service bar.  It will also be the location of Video Gaming and will be open seven days a week.  The ticket counter has been retrofitted to the former 1940s Box Office and hi-boy tables will be available. 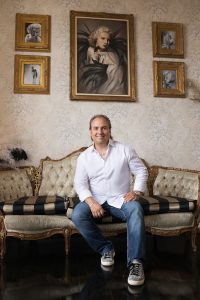 On the opposite side of the hall is a huge breakthrough in the brick where customers will be able to enter another Onesti dining experience.  “Rock ‘N Ravioli” featuring some of his best homemade recipes including Chicken Vesuvio Ravioli and the Braised Beef Ravioli will be featured.  When the dining is done, a dueling pianos show will commence.  So much happening!

Through Rock ‘N Ravioli will be an outdoor Venetian-style café with custom awnings, Italian lights and newly placed brick pavers.  It will be a place to enjoy great food and beverages under the stars in St. Charles!

As guests enter the theatre, they will notice a new main bar that is actually shortened a bit to make walking through easier.  New carpeting and detailed paint will add to the 1920s vibe.  The sound control was moved from the side of the theatre to the center of the room to welcome visiting sound technicians in a more balanced fashion.

The front theatre floor where the banquet-style chairs would be placed has been re-finished with a burgundy epoxy that glimmers with pizzaz.  The chairs themselves have been replaced with new, much more comfortable ones, by the same manufacturer that provides the chairs on the floor for the NBA.

The entire stage has been re-finished with reinforced wood and a new decorative stage front.  Enhanced stage power, lighting and a broadened backstage area has been added.

The entertainer dressing rooms with still retain its colorful walls with signatures from hundreds of performers, from Mickey Rooney and Debbie Reynolds to Kevin Costner and Shirley MacLaine, from Paul Anka and Frank Sinatra, Jr. to Don Rickles and Howie Mandell.  Rockers including Ted Nugent, Gene Simmons, Pat Benatar, Bret Michaels, Burton Cummings, AMERICA, DEVO and the B52s are among the superstars on the sacred walls.

With new floors, ceilings, dining area, showers, restrooms, production office, and even an enlarged awning between tour bus parking and the backstage door will make these dressing rooms some of the best in the country!

Yes, ninety-four years later, The Arcada Theatre is enjoying a revitalization few venues get to boast.  But as Onesti puts it, “I have been dreaming about these changes for a long time.  Now, they are becoming a reality.  I am thrilled that we can show our loyal customers and our beloved bands just how much we appreciate them with better facilities and equipment to make their experience here memorable.  And of course, I’ll still have my meatballs to give them.  They are what REALLY keep them coming back!”

Pre-show music will be provided by School of Rock.

The Venue will continue its outdoor concert series throughout June.

A run-down of some of the Fox Valley bars and clubs with live music this weekend.  (Sorry, DJ’s don’t count!) …