At 11am on Saturday, August 3rd, American Legion Post 342 member and Post Historian Anthony Catella will enact the life story of local St. Charles resident and WWI veteran Dwight Jennings. Jennings saw combat during the war. Catella met Jennings on Veterans Day during the town parade, when 25 WWI veterans were featured in the event. This event is a part of the year-long celebration of the American Legion Post 342 Centennial-founded in 1919, as one of the earliest posts in National American Legion history. The event will also feature doughnuts, courtesy of the American Legion, served up by the Auxiliary along with the story of the 1917 invention of the “doughnut” at the front lines of WWI, by Salvation Army Ensign Helen Purviance. Our local Salvation Army may also be on-hand with their “Doughnut Day” tags for donations.

THE STORY: France: In 1917 young Helen Purviance, an Ensign in the Salvation Army, working with the American First Division, sought to provide a homespun fried cruller for the troops, to help stave off their hunger. Along with fellow Ensign Margaret Sheldon, they patted the first dough into shape by hand, used a wine bottle as a rolling pin. Cutting the dough into narrow strips and twisting the dough, they created the classic cruller shape. 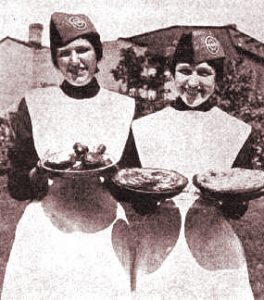 They young women could fry only seven at a time at a pot-bellied wood burning stove right there on the front lines, using a small frypan. They knelt on the ground for long hours, frying what they hoped would do more for troop morale than physical hunger. Men stood in line inhaling the tempting aroma of frying dough, in mud and rain, late into the night. That first day the girls made 150 sweet rolls. The next day they doubled the delivery.  Later, with the acquisition of more suitable equipment the girls produced 2500, served upwards of 9000 crullers, once they were given the help of other women serving with them, along the front lines. It is purported that several soldiers asked, “Can you make a doughnut with a hole in it?” The ladies improvised with the help of an elderly French Blacksmith who improvised a doughnut cutter by fastening the top of a condensed milk can and a camphor-ice tube to a wooden block. 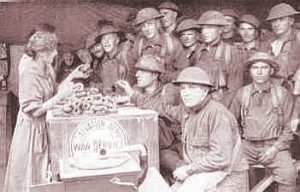 The soldiers cheered the doughnuts and soon referred to the girls as, “Doughnut Girls”, even when they baked pies and other treats! From those primitive days of WWI canteens and doughnuts, clothes-mending, concerts and religious services- that simple doughnut has come to symbolize all that the Salvation Army was doing, and does to this day, to serve and ease hardships of all kinds within our communities. Today, Salvation Army Red Shield Clubs and USO Units offer members of the Armed Forces a variety of services ranging from recreational facilities to family counseling. During every sort of peacetime emergency-fires, floods, earthquake, hurricanes, disasters of any kind-The Salvation Army mobile canteens have provided thousands of civilians with the doughnuts which embody the loving concern and readiness of this organization to help in times of need.

On Saturday, April 17, Prairie Point Community Park is inviting you to go fly a kite. In celebration of the …

Events Lollapalooza Is Back

The lineup for the four-day music festival will be announced Wednesday morning.

All shows are free to attend.