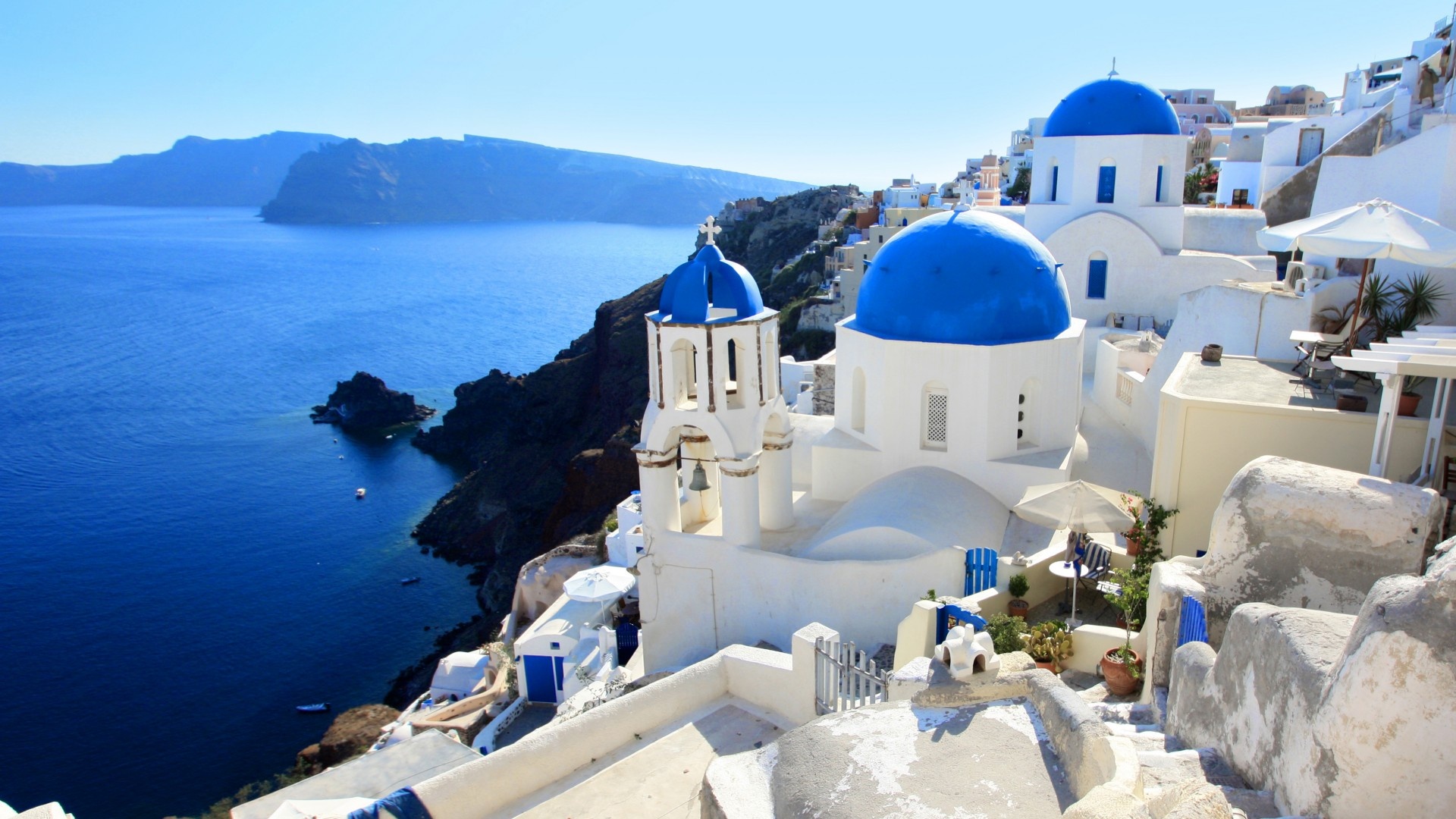 This is an exclusive travel program presented by InterTrav Corporation

Having been away from Greece for more than 30 years, I am so delighted to be bringing you all on this Greek Adventure!  ~ Shay Clarke

Fri., Oct. 4 – CHICAGO/EN ROUTE
We depart Chicago’s O’Hare International Airport on our transatlantic flight for our Athens and Greek Islands     Adventure.  (I)

Sat., Oct. 5 – ATHENS
We arrive in Europe today where we change planes and continue to Athens.  As we’ll soon find out, Athens is the oldest surviving capital of the modern world and is built around the ancient Acropolis. We enjoy dinner at our hotel this evening.  (I,D)

Sun., Oct. 6 – ATHENS
This morning we begin with a sightseeing tour of Athens that will show us the city’s major attractions. Featured is the Acropolis, the sacred hill of Athens and home to the ruins of the Parthenon, considered the world’s most perfectly proportioned building. We’ll also see the Propylaia, the Temple of the Wingless Victory, the Erectheum, as well as the Agora. Afterward, the remainder of the day is free to explore Athens on our own. The Plaka, with its winding cobblestone streets lined with colorful houses, gardens and quaint shops is the perfect location to spend the afternoon.  (B)

Mon., Oct. 7 – ATHENS / CRUISING (Mykonos)
After breakfast we depart Athens and travel to Piraeus for embarkation aboard Celestyal Cruises Olympia to begin our four-day cruise of the beautiful Greek Isles, where we’ll have the fantastic opportunity to explore the treasures of the world’s most historical and magical playground, the Mediterranean.

Our port of call this evening is the Cyclades island of Mykonos, a favorite island with visitors from all over the world and widely known as the “St. Tropez of Greece”.  White and glistening, scattered with windmills and 365 churches, Mykonos has become the home-away-from-home for many artists and fashion designers; narrow streets, flower-decked alleyways, chic boutiques and picturesque fishing harbors add to its appeal.  (B,L,D)

Tues., Oct. 8 – CRUISING (Kusadasi & Patmos)
This morning’s port of call is Kusadasi, Turkey, a colorful harbor town, seaside resort and port for the ancient Greek city of Ephesus.  Built 3,000 years ago, Ephesus shaped the history of Greek, Turkish and Christian civilizations from its privileged location, which according to legend was chosen by the oracle of Delphi. A site of pilgrimage, due to its proximity to the Temple of Artemis, and the presence of major Christian figures within the city walls. The splendor of its golden age is visible throughout its streets and exceptionally well-preserved ruins. As we explore this UNESCO World Heritage Site, we have the opportunity to explore the centuries of history and experience the traditional bargaining practice, as we conclude our trip with time to shop for local merchandise.

This afternoon, we step ashore on the Dodecanese island of Patmos, Greece.  Often called the Jerusalem of the Aegean Sea, Patmos is the sacred island where St. John wrote the Book of Revelations.  Built over 900 years ago, the Monastery of St. John is one of the richest and most influential monasteries in Greece.  Its towers and buttresses make it look like a fairytale castle, but were built to protect its trove of religious treasures.  (B,L,D)

Wed., Oct. 9 – CRUISING (Rhodes)
Today will be spent on Shay’s favorite island of Rhodes, the largest of the Dodecanese islands where the movie, “The Guns of Navarone” was filmed.  Centuries of culture and layer upon layer of extraordinary civilizations await to be discovered during our tour through Lindos and within the awe-inspiring structure of the Acropolis of Lindos. We will follow the footsteps of heroes as we walk along the Knight’s Street in the heart of historical Rhodes. The seven lodges of the Order, still bearing their original coats of arms, are displayed along the cobblestone street where Rhodes’ history was written for over two centuries. Sitting at the top of Knights Street, the Grand Master’s Palace is well worth its name. You will be awed by its imposing Gothic architecture and the strength displayed throughout its structures, as you get a glimpse into the fascinating era of the Knights. We will end our tour of historical Rhodes with free time to explore at your own pace, or join Shay in one of his favorite tavernas.  (B,L,D)

Thurs., Oct. 10 – CRUISING (Heraklion & Santorini)
This morning we dock in Heraklion, the most important town and commercial port of Crete where “Zorba the Greek” was filmed. Nearby is the well-known archeological site of Knossos, believed to be the largest Minoan site ever discovered on Crete.  The Palace of Knossos was not only the residence of the ruling house but also an administrative and religious center for the whole region.

Our final port of call is the Cyclades island of Santorini, regarded as the most spectacular of all the Greek islands, and believed by many to be home of the lost city of Atlantis.  Santorini’s spectacular caldera is a vestige of what was probably the biggest volcanic eruption in recorded history. Marvel at the whitewashed village of Fira, where postcard images of churches and bougainvillea-clad houses are set against the blue sea and sky, before enjoying one of the most beautiful sunsets in the world.  (B,L,D)

Fri., Oct. 11 – ATHENS (Corinth)
We return to Athens today and upon disembarkation we’ll travel to Delphi to enjoy one of the most popular archaeological adventures worldwide.  Located amidst breathtaking scenery in central Greece, the Sanctuary of Apollo at Ancient Delphi was the most important sacred site in the Greek world.  Our introductory tour will begin with a walk along the Sacred Way. In its heyday every available space was filled with treasury buildings, statues and votive offerings, most notably the Treasury of the Athenians.  The focus of Delphi, both in ancient times and today, is the Temple of Apollo, dating from the 4th century BC.  The temple was destroyed by an earthquake in 373 BC and was replaced by the building whose remains can be seen today.  It was here that the  famous oracles of Delphi were given in a small chamber in the Temple of Apollo. In addition, we’ll see the Sanctuary of Apollo, which is the heart of the complex. Our tour of Ancient Delphi will come to an end with a visit to the Delphi Museum.  Full of archaeological treasures, the museum displays one of the greatest classical sculptures: The Charioteer, a life size bronze figure of compelling presence and beauty.  (B,L)

Sat., Oct. 12 – ATHENS (Delphi)
Today is free to explore Athens on your own.  An optional tour will be offered to Corinth.  We’ll travel along the shores of the Saronic Gulf, passing beautiful beaches to reach the Corinth Canal, which connects the Aegean Sea with the Ionian Sea. We continue to ancient Corinth, where the Fortress of Acrocorinth can be seen on top of a hill.  A visit will be made to Mycenae, one of the oldest archaeological sites in Greece, the Homeric city of the Atreides – the city “rich in gold” of the ancient poets,famous for the Lion Gate, the Tomb of Agamemnon and the Palace.  We visit Nafplion, the picturesque town nestling at the foot of a cliff crowned by the mighty ramparts of the Palamidi Fortress.  We return to Athens in the afternoon, and no doubt Shay has plans for our last night in Greece!  (B)

Sun., Oct. 13 – ATHENS/CHICAGO
This morning we say farewell to Greece and travel to Athens’s International Airport in preparation for our return journey. No better time to reflect onof our  Greek Adventure that will last a lifetime.  (B,I)

The Vacation Price Does Not Include:  Items of a personal nature such as passport fees; laundry and cleaning; telephone calls; optional tours and excursions; tips to the Driver/Guide, local guide(s); luggage handling at airports; personal and baggage insurance; meals other than those stated above; drinks with meals other than breakfast during the land portion of our tour.