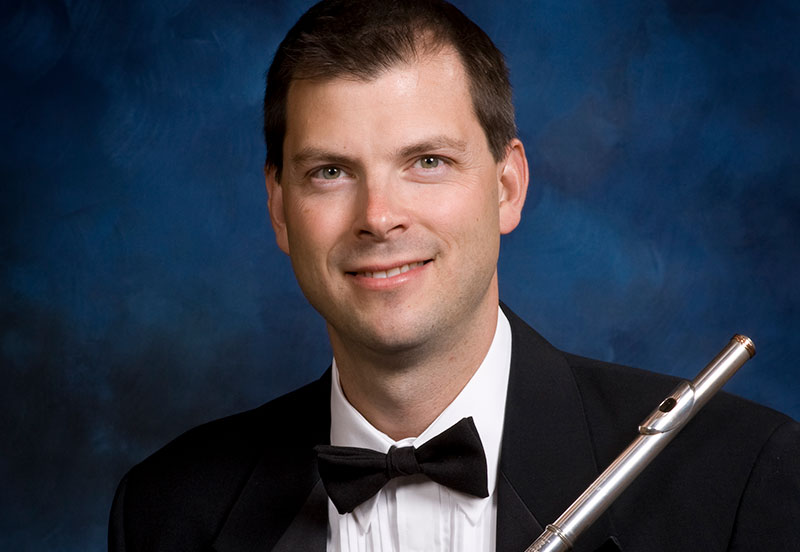 Scott prides himself as a versatile musician; he played bass flute at the National Flute Association Convention in Chicago in 2014; played piccolo, flute, alto flute and recorder for the show Wicked in South Bend; and is an accomplished piano accompanist for flute players.  Scott performed as soloist on Jacques Ibert’s Flute Concerto with the Rockford Symphony in 2016, Lowell Liebermann’s Piccolo Concerto with the South Bend Symphony in 2017, and the Ibert Concerto with the Wisconsin Philharmonic in 2018.  He was awarded first prize in the Chicago Flute Club Piccolo Competition in 2006.

In addition to performing and teaching, Scott has served as president and membership chair of the Chicago Flute Club.  During the summer, he has performed with the Peninsula Music Festival in Door County and the Pine Mountain Music Festival in Michigan’s Upper Peninsula.  He loves playing a small musical instrument because it enables him to ride his bicycle to work.  Scott’s family has a cabin in Wisconsin’s Northwoods, and loves pedaling across the state to unwind at his favorite place.

Now in its 68th season, the Elgin Symphony Orchestra (ESO) offers programming unmatched for an entertaining, informative and relaxing cultural experience. The ESO’s won Illinois Professional Orchestra of the Year a record-setting four times-in 1988, 1999, 2005 and 2016 from the Illinois Council of Orchestras-and strives to create an enjoyable entertainment experience that goes beyond the magnificent music performed by some of the best musicians in the country. There is accessible, free parking around the Hemmens Cultural Center and valet service available.  The event often features musicians performing in the lobby before concerts, and patrons can purchase unique, music-themed gifts at the Elgin Symphony League Boutique.  Pre-concert chats are given by music director Andrew Grams, guest artists and others one hour before most performances.  Saturday night patrons are invited after concerts to meet Andrew Grams, guest artists and ESO musicians at Mingle with the Musicians, held at area restaurants.  Music historian Jim Kendros offers free Listeners Club discussions the Wednesday before ESO Classics Series concert weekends at Greenfields of Geneva and the Gail Borden Public Library. Flex passes are available for choosing concerts at a later date, and if a patron can’t make a concert, the ESO offers free exchanges to subscribers and to single ticket buyers for a small fee. The ESO is a world-class orchestra presenting quality musical explorations of some of the greatest music ever written, conveniently located close to home in the western suburbs. The ESO-Transforming the Symphony Experience. ElginSymphony.Org.