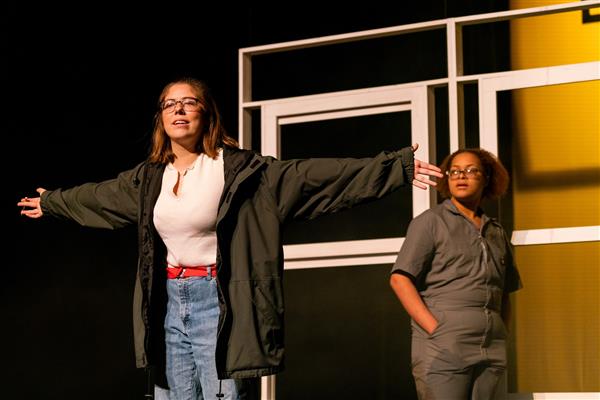 Student productions from two District U-46 high schools have been selected for presentation next week at a prestigious statewide theatre festival to be held in January.

Students from Larkin High School and South Elgin High School will present plays at the 2019 Illinois High School Theatre Festival (IHSTF). The festival will take place Jan. 10-12 at the University of Illinois at Urbana-Champaign.

The Larkin and South Elgin productions were among 21 chosen statewide for inclusion in the 44th version of the festival, which is the oldest and largest non-competitive high school theatre festival in the U.S.

LHS was selected to present its production of “Faculty Portrait,” which is a drama and dark comedy that examines grief and healing in the aftermath of a school shooting. SEHS students will present their 2018 fall play “The Addams Family,” a musical comedy about the ghoulish, macabre family created by cartoonist Charles Addams that has been the basis of a television series, hit movie and Broadway play.

“After a rigorous selection process, having two productions chosen from our District as featured performances is a great honor,” U-46 Fine Arts Coordinator Jaimie Giraldo said. “Performing their shows on such a grand stage in front of knowledgeable and appreciative audiences is a phenomenal opportunity for our students and their directors!”

After LHS asked to be considered, two festival respondents viewed the play and then led an extensive discussion with all participants. The respondents provided written feedback, deeming the LHS production highly effective and excellent, Rose said. That recommendation was forwarded to the festival selection committee, which chose the production to be included.

A similar process led to the invitation for South Elgin’s production of “The Addams Family,” which was directed by Jessica Smith, Karen Brhel and Andrew Brhel.

The fest provides an array of educational opportunities for participants. The U-46 students will be able to partake in some of the 150 workshops that will be presented and focus on a wide range of theatrical skills, from acting and direction to technical support and design. Students will also get to interact with more than 4,000 peers from 169 high schools around Illinois who are expected to attend.

Juniors and seniors interested in pursuing a theatre-related college education will have the opportunity to meet and audition with representatives from as many as 35 universities and colleges expected to attend, according to the IHSTF.