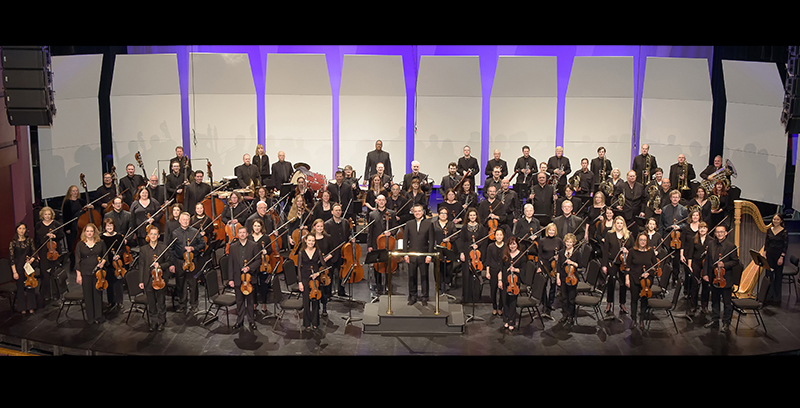 The public is invited to attend a free, open working rehearsal of the Elgin Symphony Orchestra (ESO), led by Music Director Andrew Grams, on Thursday, January 24 at 7:15 pm, Hemmens Cultural Center. Attendees MUST register online at ElginSymphony.Org. Registration is online ONLY. No phone calls and no registration onsite. Limit four (4) reservations. Doors open at 6:30 pm. Grams and the Orchestra will be rehearsing the January 26 & 27 A Night in Old Vienna program, which features Grams’ favorite Johann Strauss waltzes and polkas. The ESO concert is reminiscent of Vienna’s famous New Year’s concert.  In his lifetime, Strauss was known as “The Waltz King,” and was largely responsible for the popularity of the waltz in Vienna during the 19th century. Some of Johann Strauss’s most famous works include The Blue Danube, Emperor Waltz, Tales from the Vienna Woods, and the Tritsch-Tratsch-Polka. Among his operettas, Die Fledermaus and Der Zigeunerbaron are the best known. Music Director Andrew Grams received a degree in conducting from the Curtis Institute in 2003 and since then, in addition to leading the Elgin Symphony Orchestra, he has traveled the world to critical acclaim for his superb technique, charismatic conducting and ability to connect with musicians and audiences alike. The January 26 & 27 A Night in Old Vienna concert sponsor is John B. Sanfilippo & Son, Inc.  For tickets to the January 26 & 27 concerts, which start at $30; Youth/Student $11, visit ElginSymphony.Org.

With a unique combination of intensity, enthusiasm and technical clarity, American conductor Andrew Grams has steadily built a reputation for his dynamic concerts and long-term orchestra building.  He is the winner of 2015 Conductor of the Year from the Illinois Council of Orchestras and has led orchestras throughout the United States including The Philadelphia Orchestra, Chicago Symphony, Detroit Symphony, National Symphony Orchestra, St. Louis Symphony, Cincinnati Symphony, Baltimore Symphony Orchestra, The Dallas Symphony, and the Houston Symphony. Mr. Grams served as Assistant Conductor of The Cleveland Orchestra from 2004-2007.  Andrew Grams, now in his 6th ESO season, became music director of the Elgin Symphony Orchestra after an international search. His dynamic conducting and easy accessibility have made him a favorite of Elgin Symphony audiences.  He has extended his contract with the ESO through 2021. To learn more, visit andrewgrams.com, @andrewhilarygrams on Facebook, and @andrewhgrams on Instagram and Twitter.

Now in its 68th season, the Elgin Symphony Orchestra (ESO) offers programming unmatched for an entertaining, informative and relaxing cultural experience. The ESO’s won Illinois Professional Orchestra of the Year a record-setting four times – in 1988, 1999, 2005 and 2016 from the Illinois Council of Orchestras. The ESO strives to create an enjoyable entertainment experience that goes beyond the magnificent music performed by some of the best musicians in the country. There is accessible, free parking around the Hemmens Cultural Center and valet service available.  The concert event often features musicians performing in the lobby pre-show, and patrons can purchase unique, music-themed gifts at the Elgin Symphony League Boutique.  Pre-concert chats are given by music director Andrew Grams, guest artists and others one hour before most performances.  Saturday night patrons are invited after concerts to meet Andrew Grams, guest artists and ESO musicians at Mingle with the Musicians, held at area restaurants.  Music historian Jim Kendros offers free Listeners Club discussions the Wednesday before ESO Classics Series concert weekends at Greenfields of Geneva and the Gail Borden Public Library. Flex passes are available for choosing concerts at a later date, and if a patron can’t make a concert, the ESO offers free exchanges to subscribers and to single ticket buyers for a small fee. The ESO is a world-class orchestra presenting quality musical explorations of some of the greatest music ever written, conveniently located close to home in the western suburbs. The ESO-Transforming the Symphony Experience. ElginSymphony.Org.