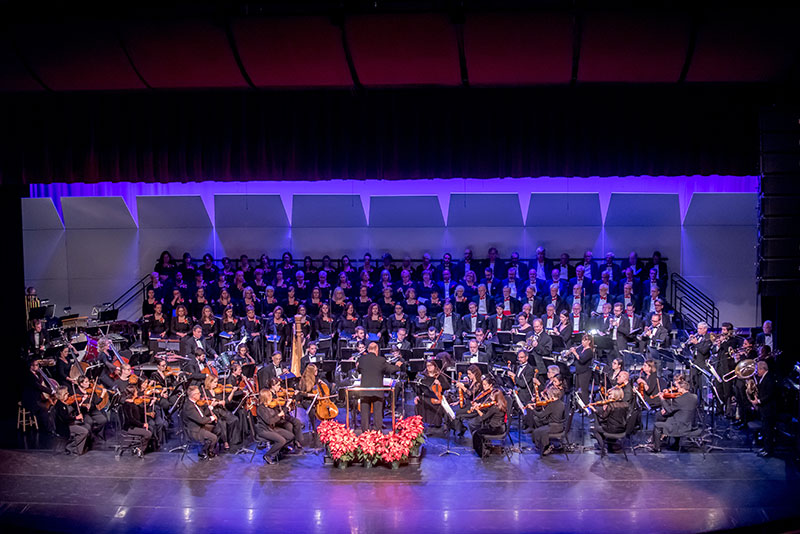 Elgin Symphony Orchestra (ESO) Resident Conductor Stephen Squires will appear on One on One with Leah (Unser),WRMN-AM 1410 radio on Friday, December 7 at 10:00 am. Squires will give a preview of the ESO’s upcoming holiday concerts December 8 & 9 at the Hemmens Cultural Center, which feature soprano Catalina Cuervo singing Jornadas, Exsultate Jubilate and more; The Elgin Master Chorale and the Midwest Dance Collective. The program also includes a sing-along and a visit from Santa. There is convenient free parking or $10 valet service. The concerts are sponsored by Wells Fargo Advisors, W.R. Meadows and Welmed. Season sponsors are Otto Engineering and John B. Sanfilippo & Son, Inc. For tickets, which are only $35-$55, visit ElginSymphony.Org or call 847-888-4000.

Stephen Squires is a musician with a career that blends his passions for conducting, teaching, and performing. He received his musical training at the Preparatory School of the Eastman School of Music and the Crane School of Music, in his home state of New York. Mr. Squires earned his Master’s degree in Instrumental Conducting/Trumpet Performance at California State University, Northridge. Further conducting studies were with Helmuth Rilling, Maurice Abravanel, Daniel Lewis, Tsung Yeh, and at the Aspen Music Festival. Mr. Squires is Professor of Conducting in the Music Conservatory of the Chicago College of Performing Arts, Roosevelt University. His current professional appointments include Resident Conductor of the Elgin (IL) Symphony Orchestra, Music Director of the Mendelssohn Chamber Orchestra (Rockford, IL), Music Director of the Millar Brass (Evanston, IL), and Music Director of the Illinois Brass Band (Arlington Heights, IL). In addition, he is an accomplished recital accompanist, freelance trumpeter, and frequent guest conductor at educational festivals throughout the country.

Colombian born Catalina Cuervo holds the distinction of having performed the most productions of Piazzolla’s “Maria de Buenos Aires” in the world in the history of the opera. Ms. Cuervo has performed the role of “Maria” for numerous prestigious companies including Florida Grand Opera, The Atlanta Opera, Cincinnati Opera, and Syracuse Opera to name a few of about fifteen productions. Ms. Cuervo did her debut in Detroit with much success as Frida Kahlo in the revival of the opera “Frida” with Michigan Opera Theater in 2015 and then with Cincinnati Opera for their 2017 season. This opera gave her a huge following in the state of Michigan and Cincinnati and both ended with all sold out shows and triumphant reviews in both cities, one even calling “Frida” best opera of the 2015 season. “Frida” will be presented next in Miami with Florida Grand Ópera, March 2019. As a consequence, Catalina was named one of the 5 most successful Colombian Sopranos in the Opera World by the Ministry of Culture of Colombia. Visit catalinacuervo.com to learn more.

In-residence at Elgin Community College, Elgin Master Chorale presents several concerts per year at the renowned Blizzard Theatre at the college, as well as the Hemmens Cultural Arts Center and other locations in the Chicago area. Under the direction of Maestro Andrew Lewis, Elgin Master Chorale is comprised of approximately 100 adult volunteer singers from across the Fox Valley communities. Proud of their rich history, dedicated singers, and drive to excel; Elgin Master Chorale has certainly grown from their valued roots as a ‘union’ of church choirs, and are dedicated to their mission of being the premiere vocal ensemble in the Fox Valley. Learn more at Elginmasterchorale.org

Ellen Werksman, dancer, teacher, choreographer, is the founder of the Midwest Dance Collective (MDC), an audition-based youth ensemble that connects young dancers to the professional world of dance. Ms. Werksman started MDC to give the young dancers at her Dancewerks studio performance opportunities. Ms. Werksman’s students often give their time by donating performances for local charitable organizations in Barrington and Chicago’s Northwest suburbs. The foundation of Dancewerks is built on limited class size in all classes and Werkshops, hands-on correction / personal classroom attention, instructors with professional, real life dance experience and technique-based classes. Ms. Werksman has been a source of inspiration for the thousands of dancers she has taught over the last 25 years. Her message of passion, commitment and integrity, along with her realistic sense of the dance business, are shared in every aspect of MDC and Dancewerks. Visit dancewerks.com to learn more.

Now in its 68th season, the Elgin Symphony Orchestra (ESO) offers programming unmatched for an entertaining, informative and relaxing cultural experience. The ESO’s won Illinois Professional Orchestra of the Year a record-setting four times – in 1988, 1999, 2005 and 2016 from the Illinois Council of Orchestras. The ESO strives to create an enjoyable entertainment experience that goes beyond the magnificent music performed by some of the best musicians in the country. There is accessible, free parking around the Hemmens Cultural Center and valet service available. The event often features musicians performing in the lobby before concerts, and patrons can purchase unique, music-themed gifts at the Elgin Symphony League Boutique. Pre-concert chats are given by music director Andrew Grams, guest artists and others one hour before most performances. Saturday night patrons are invited after concerts to meet Andrew Grams, guest artists and ESO musicians at Mingle with the Musicians, held at area restaurants. Music historian Jim Kendros offers free Listeners Club discussions the Wednesday before ESO Classics Series concert weekends at Greenfields of Geneva and the Gail Borden Public Library. Flex passes are available for choosing concerts at a later date, and if a patron can’t make a concert, the ESO offers free exchanges to subscribers and to single ticket buyers for a small fee. The ESO is a world-class orchestra presenting quality musical explorations of some of the greatest music ever written, conveniently located close to home in the western suburbs. The ESO-Transforming the Symphony Experience. ElginSymphony.Org.