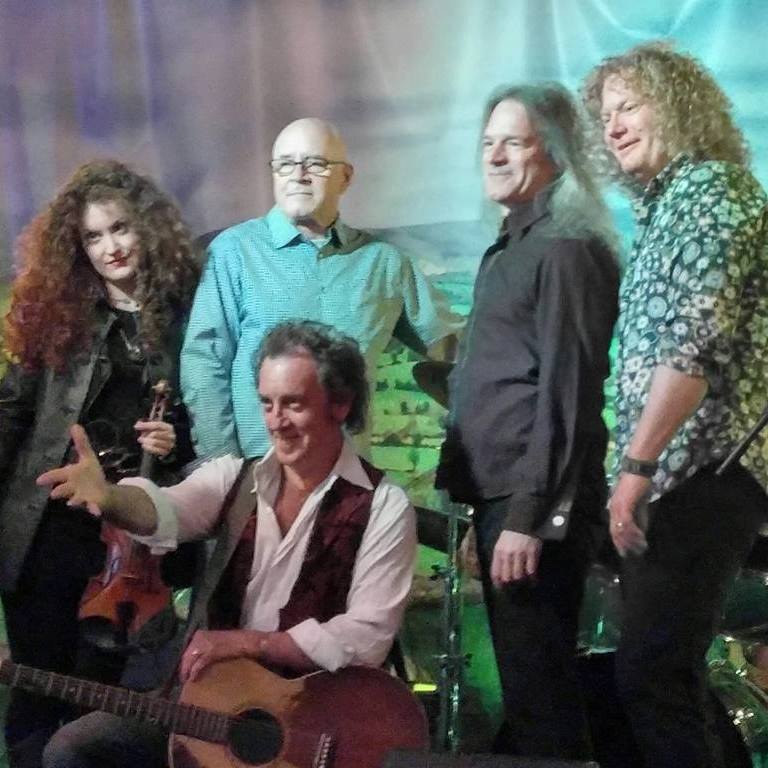 Manchester airport 6:30 AM and I’m waiting for Barleyjuice to arrive with friends, family and fans from Philadelphia, to begin a magical mystery tour which will take them to Liverpool, Belfast, Galway, Dublin and all points in-between.  Barleyjuice are one of America’s foremost Celtic rock bands and I have been a huge fan of their music for many years, if you are not familiar with them, you should check them out at www.barleyjuice.com and listen to their music on YouTube.

Our first destination is Liverpool and all things Beatle related. We have lunch and explore the Albert dock area, then back on the coach for a short tour of Liverpool’s sites, two famous cathedrals and two even more famous football grounds, Anfield and Goodison Park. Liverpool is a wonderful city and the people are as friendly as the Irish, most of them will tell you they are only a few generations removed and as a city it has often been referred to as “the real capital of Ireland.” Our hotel for the next few nights is, The Hard Days Night Hotel in the City Center, right on the same block as the famous Cavern Club where the Beatles and all of the Liverpool Bands of the 60’s were busy planning the British invasion. We are now, all 40 of us, creating our own American invasion and with dinner behind us and the pubs and clubs of Mathew Street hopping with energy, our group vanish into Liverpool’s nightlife.

Our motley crew have overnight become a Band of Brothers and the stories of the night before tell stories of debauchery and Craic in The Cavern, Sgt. Pepper’s, The Grapes and other dens of iniquity but enough said, as Day 2 in Liverpool begins with a four hour Beatle Tour.  We visit the boyhood homes of John, Paul, George and Ringo, we visit their schools and we see the places that inspired their songs, the places they hung out. The leafy suburb of Woolten where they first played together as the Quarrymen. Mercifully for most of us we stopped at a lovely pub called the Cock and Bottle where we had a few adult beverages in great company, the barmaid was brilliant and was well able for 40 of us just dropping in and she poured a great pint of Guinness.  I had scouted the tour months before and had planned this little interlude knowing some of the cast of characters I was travelling with would need the “hair of the dog”.  I also wanted to introduce our Beatle Guide, Jay Johnson to the group as he is a brilliant historian, he is also the younger brother of Holly Johnson of Frankie Goes To Hollywood fame. I have taken many Beatle Tours over the years and Jay is certainly the best I have toured with. The stories and anecdotes flowed seamlessly as we visited Penny Lane, Strawberry Fields and even Eleanor Rigby‘s Church. It was shaping up to be a great day and the best was yet to come.

That evening Barleyjuice took the stage at The Cavern around 9:30 and were welcomed by the crowd, many who had come specifically to see them. They played to a standing ovation and were told that they are welcome back to The Cavern any time. I’m not really sure what happened after that but the following morning we departed Liverpool airport for Belfast where we were met by the rain and our Irish driver Luke Shanahan, who would be with us for the remainder of the tour.

In Belfast we stayed at the Europa Hotel, one of my favorites. It is located in the City center, right across the street from two of the most iconic pubs in Ireland, The Crown and Robinson’s.

We visited Titanic Belfast and even on my fourth visit I was still not tired of it, it’s a most excellent experience. My son James had come to visit us in Belfast and after a fabulous dinner at the Europa it was across to the Crown to enjoy a few pints and I’m sure all of our people had a ball that night, they all loved Belfast.

The following day was a tour of the North Antrim coast, where we visited the Giants Causeway before returning to Belfast via the beautiful Glens of Antrim, Ballycastle, Rathlin Island and the beautiful towns of Cushendun and Cushendall. We were back into Belfast with enough time to visit the Peace Wall, a quick drive up the Falls Road and back down through the Shankill Road. I noticed that there are fewer flags flying in this once troubled area and I took that as a sign of healing, I hope I’m right.

Game of Thrones fans were really looking forward to our evening’s private banquet at Winterfell Castle and it was, as always, a huge hit. We ate heartily, drank lustily and practiced with our longbows before being entertained by Barleyjuice in an amazing impromptu set that those present will never forget. We were a dozy lot when we left Winterfell on our short trip back to Belfast and, as it was an early start the following day, some of our crew faded off to bed. It had been another long day.

The following morning the Tour headed for Galway via Enniskillen and myself and James headed for Dublin. I was escaping to see my Mum and family for a few days and I knew that I would pick up the Tour again when they got to Dublin. In Galway, Barleyjuice played The Quay’s and photos tell me that they also did The Quiet Man Tour in Cong. They had also stopped at Drumcliffe Churchyard in the shadow of Ben Bulben to say a prayer at the grave of W.B. Yeats.

It was fun to catch up with the band in Dublin and to see the photos of the few days that I had missed. I heard the adventure stories and enjoyed the fact that by the time the tour was done they were like a family.

On the last night the farewell dinner was at The Irish House Party and again Barleyjuice were welcomed to the stage to play. I’m not a betting man but I doubt that there is a Band in the World who have played The Cavern, Winterfell Castle, The Quay’s Bar and The Irish House Party in the same week.

A tour to remember, an epic adventure and I’m doing it again in October if you would like to come along.